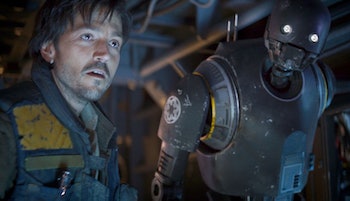 Cassian Andor’s greatest ally has finally been revealed. In Star Wars: Andor, episode 7, “Announcement,” we finally have our first big Rogue One cameo. But this particular character isn’t someone we expected to see mostly because the actor behind this character outright said they wouldn’t appear in Season 1 of Andor. But now, it seems, everything is different. Here’s how the sudden appearance of someone from Rogue One in Andor might set up the rest of the season.

So, is this droid going to become K-2SO?

Alan Tudyk is still not in Andor

Although he played the voice of K-2SO in Rogue One, actor Alan Tudyk does not appear to be voicing this KX-series Imperial droid in Andor. This makes sense. If Cassian is going to reprogram this (or another) KX droid, it would stand to reason that the droid’s voice and demeanor will change at that point. Tudyk previously told Collider that he was not in Andor Season 1, saying: “I'm not in it...but, if it stays on the air, stories keep getting told, I'll end up in there ... I'm going to be in the show.”

Tudyk also said the reason he was supposedly not going to appear in Andor Season 1 is that the story “doesn't involve K-2SO until later on.” Technically, right now, this is all true. Tudyk’s name does not appear in the credits, and when the KX droid harrases Cassian, it doesn’t sound like him. But that doesn’t mean we’re not getting the birth of K-2SO very, very soon!

K-2SO’s origin story could be rewritten

Because the end of Episode 7 finds Cassian locked up by the Empire, the next question is, how does he break out? And, with the introduction of the KX security droids, it seems we might already have the answer. If Cassian is going to get out of Imperial custody, he’s going to need help. We already know that Cassian is good with droids, so it’s possible that to escape, in a future Andor episode, we’ll see him reprogram one of the KX droids and then suddenly create K-2SO in the process.

That said, if we do get an origin story for K-2SO, this will be a new origin story. Although it’s never revealed in Rogue One exactly how Cassian and K-2SO met, an in-canon comic book called Rogue One - Cassian & K-2SO Special did create a backstory. In that “first” meeting, K-2SO tried to strangle Cassian, which, interestingly, happens with the KX droid in Andor’s “Announcement.” If K-2SO does emerge from one of these KX droids in Andor, it will fit perfectly with where the show is going. It will, however, slightly contradict this origin story from the comics.

That said, in 2020, The Mandalorian Season 2 slightly contradicted Cobb Vanth’s background, which differed a decent amount from what happened in the 2015 novel Aftermath. In other words, although there is an in-canon comics story that shows K-2SO’s origin, the newer Star Wars shows have already demonstrated that these kinds of small canon details can be changed. After all, because K-2SO’s memory will get altered at some point, who’s to say what the real story is anyway.

Andor and Rogue One are both streaming on Disney+