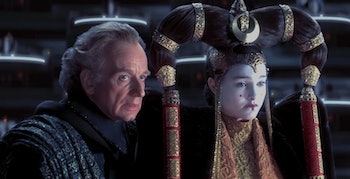 The Imperial Senate will be dissolved by Emperor Palpatine by the time Andor Season 2 rolls around. But right now in Andor Season 1, we’re still five years away from that moment, referenced off-screen in Star Wars: A New Hope. And at this point in history, right at the end of Episode 6 of Andor, the senate is depicted as the most realistic we’ve ever seen in all of Star Wars. Here’s how one very small scene in Andor Episode 6, “The Eye,” finally gives us a version of space politics that feels honest.

As the explosive events of Episode 6 wind down, and news of the Rebel heist on Aldhani trickles back to Coruscant, we briefly see Mon Mothma addressing the senate over her concerns about the Imperial treatment of the Ghormans. The only problem is, the senate is pretty much completely empty.

As she gives her speech, Mothma realizes several delegates are distracted by news of the Rebel attack we just watched Cassian and his allies pull off. But what’s jarring here isn’t just that an entirely full senate suddenly had a bunch of people filing out. The senate was mostly empty before people started to leave. In other words, the mostly empty senate wasn’t the result of the news from Aldhani. The mostly empty senate was the status quo. What we’ve seen up to this point in Star Wars canon has not been a normal day in the senate.

It’s long been fashionable to mock Episode I: The Phantom Menace for its focus on space politics. But the depiction of the senate in that film, and in this scene in Andor couldn’t be more strikingly different. In The Phantom Menace representatives from every single planet are there to hear the complaints of Amidala and the blockade of Naboo. In fairness, we’re told that this is a special session of the senate. But still, it’s a packed house full of the kind of drama that is often absent from actual government preceding in real life. In Andor, Mon Mothma looks like she’s on outer space C-SPAN, which is probably what governance on Coruscant would look like most days.

This contrast is deeper than an empty Senate versus a full one. When you listen to what Mon Mothma is saying, she’s asking for a “fact-finding commission” to get to the bottom of the oppression of the Ghormans. This doesn’t sound too different than what Amidala was asking for twenty-seven years prior. In The Phantom Menace, all the stops are pulled out to let Amidala have her say. In Andor, literally, nobody cares. Palpatine, who, in theory, oversees the Senate, isn’t even there.

Again, at this point in Andor’s storyline, this moment lets us know that Coruscant is abuzz with zany Rebellion news. But it’s very revealing that the senate looked this empty to begin with. You can imagine an alternate version of this, with a bustling senate, complete with Palpatine bellowing at Mon Mothma, and then millions of people getting alerts on their devices and suddenly leaving. But Andor doesn’t do that, because this senate is more realistic to the way politics really are day-to-day: boring and slow, with even the participants barely paying attention to the proceedings.

The irony is that in trying to make space politics exciting, The Phantom Menace only rendered those moments more boring. What Andor just did was present space politics as boring, which brilliantly, made everything about the Imperial senate way more dramatic.