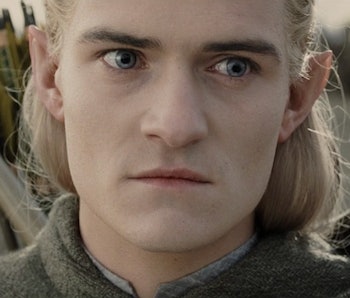 Amazon’s Lord of the Rings TV series will be able to explore places and characters that previous J.R.R. Tolkien adaptations couldn’t.

The prequel series’ Second Age setting means it can feature legendary characters like Celebrimbor and Glorfindel, who didn’t make the cut in director Peter Jackson’s Lord of the Rings film trilogy. Similarly, the show’s inclusion of the island kingdom of Númenor gives it the chance to depict the origins of important realms like Arnor and Gondor on-screen for the first time.

Notably, the presence of Númenor in the Amazon series also means it has the chance to explain the background of one of the Lord of the Rings’ most mysterious and memorable villains.

The Theory — While Númenor is famous for being corrupted and ultimately destroyed by Sauron, the kingdom also plays an important role in the lives of characters like Isildur, Elendil, and — as hardcore Tolkien fans may already know — the Mouth of Sauron.

While the Mouth of Sauron’s origins are shrouded in mystery, we do know that the Dark Lord’s messenger is a member of the Black Númenóreans. That means he not only has direct ties to the downfall of Númenor, but he’s part of one of the most important factions created by Sauron’s corruption of the once-great island kingdom.

All Bark, All Bite — In the years leading up to Númenor’s destruction, its people became increasingly divided between those who remained faithful to the Valar, the divine beings that created the island kingdom for them, and those who grew resentful of their mortality. Those who remained humble in the face of their compatriots’ growing hubris were known as “The Faithful,” a group that counted characters like Elendil and Isildur among its members.

The other Númenoreans, who wished to claim immortality and extend their control over Middle-earth, were first known as the “King’s Men.” When Sauron was brought to Númenor and began his corruption of the kingdom, the King’s Men quickly succumbed to his manipulations. Many members of the faction subsequently travelled Middle-earth and established settlements, becoming tyrants and oppressors over the other Men of the continent. Three of the Ringwraiths are even said to be members of the King’s Men.

Little is known about the character’s early years, including when and where he was born. However, it’s said that the Mouth of Sauron travelled to the Dark Tower of Mordor when it was rebuilt in the Third Age of Middle-earth. He went on to become one of Sauron’s most loyal and devoted servants during Frodo’s adventure and the conflict that surrounded it.

The Inverse Analysis — Whether Amazon’s Lord of the Rings series shows the Mouth of Sauron’s early years will depend on how far into the Second and Third Ages of Middle-earth it goes. But even if the series doesn’t show the life of the Mouth of Sauron, its inclusion of Númenor will allow it to chart the origins of the Black Númenóreans, a group whose ideals ultimately lead to the creation of one of Sauron’s greatest servants.

Amazon’s Lord of the Rings series premieres on September 2, 2022.