“It began with the forging of the great rings.” 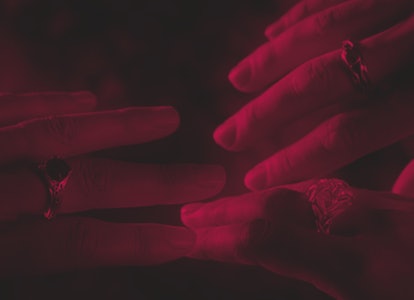 With less than a year until Amazon’s Lord of the Rings prequel series makes its long-awaited premiere, the title has finally been revealed. The Lord of the Rings: The Rings of Power promises to explore some of the greatest moments in the history of Middle-earth, many of which have only been briefly alluded to in previous J.R.R. Tolkien adaptations.

Now that the title has been revealed, Lord of the Rings fans finally know what the series will focus on, and the legendary Middle-earth story it will tell first.

The Forging of the Rings — In a statement released with the title announcement, The Rings of Power showrunners J.D. Payne and Patrick McKay teased that the series “unites all the major stories of Middle-earth’s Second Age.” That confirms The Rings of Power will depict the biggest historical events that took place throughout the Second Age of Middle-earth, including the downfall of Númenor and the Last Alliance of Elves and Men.

However, the title also confirms that the series’ primary focus, at least initially, will be on a major story that some fans had been convinced would only be passingly featured in the show. We are, of course, talking about the forging of the Rings of Power.

Sauron’s Emergence — Around 1500 years into the Second Age, Sauron sought out the Elves. Disguising himself as the fair Annatar, the Lord of Gifts, he tricked Celebrimbor and the other Elven-smiths of Eregion into forging the Rings of Power. He helped them forge 16 of the 20 rings, while Celebrimbor forged three that were later given to Galadriel, Gil-galad, and Círdan.

While Sauron aided in the creation of the seven rings that were given to the Dwarves and the nine that were given to the Men, he also forged the One Ring, which all the others were bound to, on his own at Mount Doom. However, when Sauron put on the One Ring his treachery was discovered by the Elves, who hid their three rings. In retaliation, Sauron attacked the Elves and demanded that all the Rings of Power be delivered to him, beginning a conflict that would result in, among other things, the brutal demise of Celebrimbor.

The forging of the Rings of Power and the conflict between the Elves and Sauron is a story that could take up several seasons of television, so it’s not hard to see why the Amazon series appears to be starting its run with it. The Rings of Power can open with a story that even casual Lord of the Rings viewers will be vaguely familiar with, all while introducing characters and perspectives that most fans haven’t seen on-screen. Even introducing Sauron as Annatar gives The Rings of Power the unique opportunity to show viewers the series’ most iconic villain in a way they haven’t seen before.

The Inverse Analysis — In recent months, rumors have claimed that Amazon’s Lord of the Rings prequel series was going to condense the story of the forging of the Rings of Power in favor of spending more time exploring the downfall of Númenor.

While it’s still possible the series may blend those stories together, the fact that the show is called The Rings of Power essentially confirms that it’s going to focus on the forging of the rings, as well as on Sauron’s re-emergence in the Second Age. Not only is that story well worth exploring, but the Númenóreans helping the Elves against Sauron also serves as the perfect lead-in to the Dark Lord’s corruption of the great island kingdom.

By merely confirming its title, The Rings of Power has given Lord of the Rings fans everywhere a much better idea of what to expect from the series, including the story it plans on kicking everything off with.

The Lord of the Rings: The Rings of Power premieres September 2, 2022 on Amazon Prime.