“But she’s still a Borg Queen” 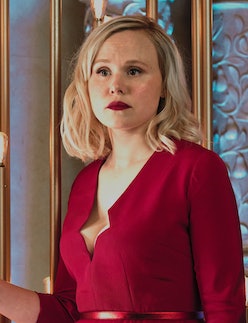 The Borg Queen is living in Alison Pill’s brain.

By the end of Star Trek: Picard Season 2 Episode 6, “Two of One,” Dr. Agnes Jurati (Alison Pill) and the Borg Queen (Annie Wersching) have basically merged into a hybrid character. Jurati is still Jurati, but the Borg Queen’s consciousness now exists in her mind as an omnipresent alter-ego. We’ve never seen the Borg assimilate anyone like this before, and we’ve certainly never seen someone belt out a Pat Benatar rock classic thanks to newfound Borg confidence.

For Pill, this episode represents more than just one facet of her character. It’s the moment she thinks this version of Star Trek proved solidified its style. Spoilers ahead.

Directed by Jonathan Frakes, the “Two of One” finds the time-traveling crew desperate to protect Jean-Luc’s ancestor all while trying to play it cool at a swanky party for astronauts bound for Europa. Though this episode has many memorable moments — including Adam Soong (Brent Spiner) trying to run Picard (Patrick Stewart) over with a Tesla — all the scenes are easily stolen by Alison Pill bringing down the house with a jazzy cover of “Shadows of the Night,” Pat Benatar’s 1982 rock hit.

“I think the choice of song is so wonderfully weird,” Pill tells Inverse. “It was such a thrill to do and to explore this very rock song in the midst of a big band sound. I think it struck the right tone for this kind of newer, vibe for Star Trek that was just like, ‘No we’re a little weirder.’ We can get funky with this.”

Just in case anyone is confused, yes that is Alison Pill actually singing “Shadows of the Night” in Star Trek: Picard. Pill is a multitalented performer and has plenty of experience singing as well as playing musical instruments. She even taught herself drums for 2010’s Scott Pilgrim vs. the World and sings on that movie’s soundtrack, too. For Picard, she confirms she recorded the song before filming.

“I sing along to a pre-recorded version of myself,” Pill says. “There was a big stage and a full band. It was a childhood dream to do that.”

“[Frakes] has a history in musical theater,” Pill explains. “He’s so knowledgeable about it and is just one of my favorite humans.”

She and Frakes worked tirelessly on the choreography and to determine how the song worked within the dramatic context of the episode.

“Alison Pill has bounding range,” Jonathan Frakes tells Inverse. “The subtlety at which she’s embraced the Borg Queen inside her is magnificent and effective. It’s interesting and weird and somehow she finds a way to bring some levity to it.”

“Many of the goals of the Borg Queen don’t sound so bad.”

The mixtures of feelings the audience has for Agnes Jurati are now numerous, layered, and contradictory. It’s thrilling to see the character become more powerful and more confident, and it’s fun, too.

But she’s also literally becoming one with the Borg Queen, and thus, giving into assimilation. Star Trek has never done a Borg story quite like this, and Pill points out that it’s within all of these paradoxical notions that Picard is truly breaking new ground. Previous versions of Star Trek have told us that getting assimilated by the hivemind of the Borg is always bad. What Jurati’s fusion with the Borg Queen suggests is... maybe it’s complicated?

Here’s Pill in her own words:

“I think the real beauty of Jurati’s storyline is trying to look at what assimilation doesn't have to be, what the origins of assimilation are, and where we might redefine that in terms of community. Many of the goals of the Borg Queen don’t sound so bad. The actual political and emotional sentiment behind it is that we can work toward a common good together to support each other and build each other up. But assimilation is none of those things, actually. So Jurati is hoping there could be community without the assimilation. And the Borg Queen sort of insinuates that’s possible. But she’s still a Borg Queen.”

The storyline of Agnes merging with the Borg Queen certainly has huge implications for the rest of Picard Season 2. Will Jurati become a new Borg Queen? How will that impact the history of Earth in 2024? What about the other Borg Queen we saw in “The Star Gazer?”

These are all big questions, but Alison Pill knows that larger plot swings only work because of smaller character beats. The interior life of Agnes Jurati previously obscured in Season 1, is now coming into the light, paradoxically, because she’s having her brain hijacked by one of sci-fi’s most famous villains.

“She's always had so many secrets and emotions,” Pill says. “This is what my character is like on the inside and I’ve known for ages. You’re just now getting to see it so forthrightly.” So, will Agnes Jurati become one with the Borg and give up her individuality in the process? Alison Pill isn’t so sure that’s even the right question anymore.

“I think we definitely all understand that humans are social animals and many animals are social,” Pill says. “So how do we organize ourselves by these principles that don't put us in these individual black and white boxes and get stuck in the binary way of thinking? Of good vs. bad? Or with us or against us? How, how could we operate in society if those weren't the only options? That’s what our show is about.”