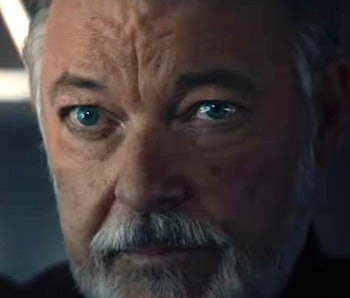 Jean-Luc Picard’s family is back. In a surprise casting announcement, revealed on First Contact Day, the entire main cast of Star Trek: The Next Generation will return for Picard Season 3. Here’s what that might mean, comments from the Picard showrunner, and what it all means. Engage!

The trailer opens with Jean-Luc Picard, seemingly back in Chateau Picard, apparently writing his memoirs. But, then we hear new quotes from the entire main cast of The Next Generation, including Geordi (LeVar Burton), Worf (Michael Dorn), Troi (Marina Sirtis), Crusher (Gates McFadden), Riker (Jonathan Frakes), and Brent Spiner...but probably not as Data.

Picard goes through his old belongings, including his TNG-era uniform and communicator badge. And as the topper, we see Riker and Picard, side-by-side, holding phasers, with Riker saying “Ready?” and Picard replying, “as ever.”

Then, the trailer confirms that everyone — the seven principles cast members of TNG — are back for Season 3 of Picard. Of course, Jonathan Frakes, Marina Sirtis, and Brent Spiner have appeared in Season 1 and Season 2 of Picard already so, in a sense, the big deal here is Worf (Dorn), Crusher (McFadden), and Geordi (Burton). But what will this big reunion mean?

WHAT’S YOUR FAVORITE TIME-TRAVEL MOVIE? Click here to help us rank all the ones on Netflix

The revelation of the TNG cast is, in a sense, a small spoiler for the rest of Picard Season 2. If Jean-Luc is back at his vineyard and looking at his old TNG-era uniform, then it would seem the corrupted timeline of Season 2 has been fixed by Season 3.

Then again, we don’t really know where and when this scene takes place. We also can’t be sure why the crew is being called together. Riker says “Aren’t we overdue for a good old-fashioned road trip,” but Worf says, “It is clear, sacrifice is required again.” Meanwhile, Troi says, “I promise, you will not be alone.”

Geordi says, “I think back on those days on the Enterprise....all the danger we were rushed into...” and Picard just replies, “those were the days.” We hear Crusher say, “Jean-Luc when the galaxy comes calling, you love it!”

And then, most oddly there’s Brent Spiner’s mysterious character speaking: “Evolution is not an act of preservation, it's addition!” At this point, we know Data is dead in the current timeline, and the voice Spiner is doing doesn’t exactly sound like Altan Soong. So what is this? A new version of Data? Some kind of resurrected hologram Data? It’s not clear! Could Picard Season 2 lead directly into Season 3?

Overall, the voiceovers combined with the visage of Riker and Picard back-in-action results in a feeling that is both jubilant but also foreboding. Why is the TNG crew back together? What’s the “sacrifice” Worf is talking about? Why is Geordi stressed about rushing into danger?

In addition to the announcement, Picard showrunner Terry Matalas also teased this:

“It’s most fitting that the story of Jean-Luc Picard ends honoring the beginning, with his dearest and most loyal friends from the U.S.S. Enterprise. It would be an understatement to say that giving these characters a proper send-off is an honor. The entire STAR TREK: PICARD team and I can’t wait for fans to experience this final, high-stakes, starship-bound adventure in season three!”

Season 3 of Picard will conclude the entire series. So whatever happens on this big “road trip” is almost certainly the very last ride of The Next Generation.

Star Trek: Picard Season 3 does not yet have a release date.