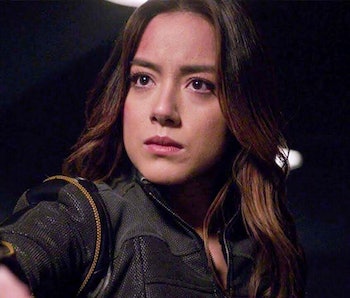 The MCU has often painted itself into a narrative corner with its TV shows. There are so many facets to Marvel’s television empire — the Netflix series, the Hulu originals, the ABC series, and the Disney+ series — that it’s hard to keep all the stories straight. The first attempt at fixing this was to simply claim that only the Disney+ shows were canon, but Daredevil’s appearance in Spider-Man: No Way Home and later She-Hulk: Attorney at Law proved the line between canon and non-canon was a lot blurrier than we thought.

Now, a new rumor suggests that another character from the MCU’s forgotten past may jump back into the current canon.

Hardcore Marvel fans are probably familiar with Charles Murphy of Murphy’s Multiverse, a noted leaker of Marvel developments. On Tuesday, Murphy randomly decided to air his grievances about the acting talent of Chloe Bennet, star of the ABC series Agents of S.H.I.E.L.D. “I can’t imagine Bennet sharing the screen with talent like Florence Pugh, Hailee Steinfeld or Samuel L. Jackson (could keep going). Just not the same caliber of actress,” Murphy tweeted.

After a long argument with Bennet’s defenders, Murphy responded to the claim that she was the best actor on the show with, “The best acting on a soap opera isn’t really a major accomplishment.” That prompted Bennet herself to get involved.

Good on Bennet for defending herself, but what does the last part of her tweet mean? Could Bennet be teasing a return to the MCU that would make Murphy eat his words, or merely a meaty acting gig that will prove she can stand alongside the MCU’s heavy hitters?

Let’s assume Bennet does return to the MCU. How would that be parsed canonically? If Matt Murdock can be slipped back in seamlessly, then surely Daisy Johnson — better known as Quake — could be brought back too. That doesn’t mean the entirety of Agents of S.H.I.E.L.D. would have to made canon as, thanks to the handy catch-all explanation of the multiverse, it could be established that the Quake introduced to the MCU is simply a variant that happens to look the same as the one we saw in Agents.

Quake was introduced on Agents of S.H.I.E.L.D. as Skye, a genius hacker who fell in with Agent Phil Coulson. She worked with S.H.I.E.L.D. as a computer specialist until an encounter with a strange mist made her discover she was an Inhuman with the power to cause vibrations, hence the superheroic persona of Quake. There’s something of a precedent for this: Black Bolt, formerly of the non-canon series Inhumans, appeared in Doctor Strange in the Multiverse of Madness, so Quake would just be another lost TV character brought into the fold.

Regardless of what Bennet was alluding to, Agents of S.H.I.E.L.D. was a fine show with many characters worth revisiting, and perhaps even bringing into the MCU proper. With the multiverse up and running, there’s no reason not to.

Agents of S.H.I.E.L.D. is now streaming on Disney+.