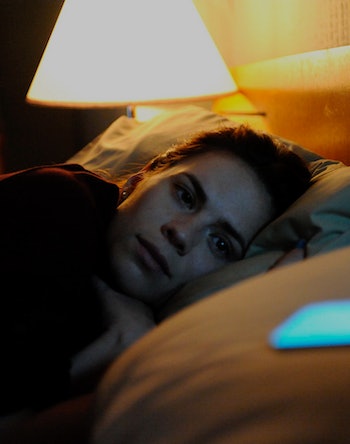 Faces, torsos, hiking boots on adventures, and snapshots of avocado toast fly by fleetingly. Tossed in one direction or another, they land into an imaginary pile of wafer-thin dossiers that one hopes to peruse another time — or, just as likely, will fade into the recesses of your memory and of the digital world more broadly. Or they’re scrolled through, a menu of meats, organized archetypically, predictably. All these little versions of oneself presented at a quick glance, a bite-sized romantic/sexual resumé. They’re antiquated, and yet we try to concentrate the most sellable version of ourselves and put them on these platforms in the hopes that someone will be in the buyer’s market.

The way we experience desire, sexuality, and identity has been shaped by digital technology in ways beyond dating and hookup apps like Tinder and Grindr. Tech has become a mediator in how we experience those things in their full capacity: You refine a visual language for what you like and how that defines you through images and videos on the internet. Our sense of attraction, disgust, euphoria, arousal, and the ways those elements contribute to the identity we craft for ourselves and the one(s) we exhibit to various audiences in different contexts have been radically altered in the so-called Digital Age.

Those most basic parts of us are the most terrifying to confront. Jealousy, longing; so rudimentary are they in the context of romance and sex that nearly every story is, if not about them, informed by them. Much of those scenarios have to do with lost or squandered time, or the thing you wish you could do over.

In the Season 1 episode “The Entire History of You,” you can do something over. Everyone has a little computer implanted behind the ear that grants them the power of replay with the flick of a button. The device, called the Willow Grain, is as easily abusable as one could imagine: Liam (Toby Kebbell) is frequently seen slack-jawed, a glazed look over his face, his eyes milky as he replays a scene from his life from mere moments ago. The sex with his wife only comprises memories of better sex of yore. While their video memory recalls passion and electricity, a cut reveals the dazed, hollow sex life of people who use the past to maintain the lifespan of the current relationship, perhaps past its expiration date.

As Liam begins to suspect his wife’s, Fi (Jodie Whittaker), his reliance on the Grain becomes a kind of codependency, as if the video is the unimpeachable challenge to the nature of subjectivity and memory. Wouldn’t that be nice? To get a little confirmation about your own experiences through some third-party device? Just something to obsess over.

Astutely, the episode gets at the idea that video “evidence” itself is not without bias, not apolitical or free of baggage and context. Video in and of itself is not truth, contrary to what French director Jean-Luc Godard may have said. Truth is as wily and untamable as passion and jealousy and, frankly, grief.

The grief of “The Entire History of You,” of intimacy squandered in both literal and abstract ways, is given its complement in the Season 2 episode “Be Right Back.” The surviving partner Martha (Hayley Atwell) is given the chance to reanimate her late, social media addled/savvy boyfriend Ash (Domnhall Gleason) — first via chatbox, then Siri-like audio A.I., then android. Here, grief and desire are inextricable, that you can’t relive one without the other, which is perfectly natural. What is more alarming, though, is the way in which the data (texts, tweets, posts, voice calls, videos, emails, etc.) about the dead beau can be pulled to assemble the uncanny facsimile of a lover. It’s not them, but is it good enough for the time being? (Also frightening: The “ghost” of Ash continually pushes Martha to take the next step and upgrade her reanimated partner, like a salesman exploiting bereavement.)

There’s no way for her to believe that this convincing robot of Ash is actually Ash. The ecstasy, the strengths, and the flaws of their chemistry can’t be replicated by the most advanced technology. Those elements and their alchemy are what made them human. Rather, “Be Right Back” has an interesting perspective about the data, the contemporary manner in which we archive our desires, relationships, sexual histories in public and private, what versions of our desires exist online and how we navigate them offline. They’re pieces of a puzzle whose assemblage, not unlike in “The Entire History of You,” is dependent on context.

Yet increasingly, the context becomes a digital one, not so much non-existent without digital technology, but as connected to a tangible world as an ephemeral one. As in Season 3’s “San Junipero,” the way in which desire, especially non-normative (read: queer) desire, can bloom (or live forever in a strange purgatory, a “space” embedded in queer history) is in the shadows and annals of spaces others may not be privy to. For the love between wallflower-y Yorkie (Mackenzie Davis) and gregarious Kelly (Gugu Mbatha-Raw) to work, they must agree to spend the rest of their lives living in “San Junipero,” the virtual reality paradise filled with nightclubs decorated to any era you could hope for.

To be in this utopia means to live forever in a server. Upon its release, it was uncritically described as the happiest episode of Black Mirror, a show whose tone skews dystopian. And while the tone of the episode is different, and I don’t disagree that it’s a beautiful entry, its tech-ethical implications are no less worthy of interrogation: a sense of immortality in the cloud, and the ambivalence that comes with it, and, what’s more, a confirmation that this kind of love is better suited to servers than the action of real life.

Those servers are also no doubt owned; they’re just data now. The secrecy of the internet, where queers of all ages came/come of age and find people like them on forums and social media platforms, has a resemblance to the shadows and out of the way bars that served as little pieces of heaven.

That nature of privateness continues to change. Now, there’s an expectation that, regardless of gender or sexual identity, you will be paired off. It’s a bit of social conditioning, and the technology has merely amplified decades’ old practices, that dating is work and you’re basically making a business partnership — or at least transaction.

Season 4’s “Hang the DJ” is paradoxical in its handling of this. In Brooker’s watered-down (but admittedly moving) take on Yorgos Lanthimos’ The Lobster, also about compulsory hetero-monogamy, everyone’s relationship gets a timer before they move on to the next one. Five hours, seven weeks, 10 years, etc. It is all very systematic, with the implication that digital technologies simply reify these systems and institutions, with our personal desires either adhering to or challenging them. “Hang the DJ” does both at the same time, with a couple fighting the system only to… reaffirm the system.

For a show whose intention is usually relatively straightforward, at least ideologically speaking — digital technology is less good than you think it is! the show mightily proclaims as its dystopian perspective fixates on what we sacrifice (privacy, autonomy, intimacy, etc.) for supposed ease of comfort — there’s a surprising (at worst) lack of clarity and (at best) ambivalence about the nihilism of how digital technologies have hijacked our sense of “choice” in desire and sex. It rings off with a strange “well, there’s nothing we can do about it” in spite of the anarchic nature of the plot.

If defeatism begins to color Black Mirror’s later seasons, there’s still a little room for compelling questions to be asked in this particular subject, such as the fifth season’s “Striking Vipers,” which returns to some of the same terrain as “San Junipero”: VR, the shadows of an ephemeral world where queer desire can exist.

In the latest iteration of a Street Fighter-like video game called Striking Vipers, users can become their characters in a digital landscape. They can think, feel, and experience everything their avatar does, including both pain and pleasure. The game is sent to Danny (Anthony Mackie) by a friend who he’d lost touch with, Karl (Yahya Abdul-Mateen II), and who he may have had homoerotic tension with in the past. In the game world, with Danny playing Lance (Ludi Lin) and Karl playing Roxette (Pom Klementieff), their desire for one another (or is it?) is allowed to exist freely, at least within the confines of the game.

It’s quasi-cybersex, and there’s a question of sexual compatibility in digital spaces versus physical ones, though the delineation between the two here fades. How much of the sex they’re having in this space is actually them. How much of their desire can be translated and transmuted in this space? A strange irony also exists as far as the gender that they respectively take. It’s queer if their sex were outside of the game, but they take on a heteronormative pairing. But then, Karl inhabits the body of a woman, suggesting an interrogation of gender, pleasure, and how desire functions differently in both spaces and bodies.

The episode dips its toes into a complicated vision of race and desire. As both men are Black, their concealed trysts remind one of men on the DL, a term to describe closeted Black men who have sex with men. Additionally, they’re inhabiting Asian bodies, to which the Western world has its own complicated relationship to masculinity, femininity, and desire (think stereotypes of geishas and eunuchs). And these aren’t random Asian bodies, but avatars of the most extreme versions of masculinity and femininity and the ways in which they mix. They are deliberate fantasies and idealized avatars of desire.

Posing as another gender or body to get at one’s personal “truth” (whatever that may mean) is embedded into the history of the internet— heck, it’s embedded in the history of modern sexuality. Black Mirror follows the trajectory of how digital technology changes (but mostly doesn’t change) the most basic aspects of our lives. These alterations in the most quotidian of our experiences seem explosive, and the advancements themselves seem gigantic, but the aspirations and desires are basic, human, and only all the more terrifying to confront because our attempts to obscure or mediate them merely amplify how core they are to our lives.

The most dystopian aspect of how Black Mirror examines desire and intimacy is how integral those elements are to our lives and how easy they are to exploit and further commodify. Every day and every interaction then becomes a challenge to see if one can delineate between data and human impulse, and against easy commodification and info to be mined. Lest our investments in these technologies, apps, profiles, etc. send us back to black.

Kyle Turner is a queer freelance writer based in Brooklyn, NY. He is a contributor to Paste Magazine, and his writing has been featured in The Village Voice, GQ, Slate, NPR, and the New York Times. He is relieved to know that he is not a golem.