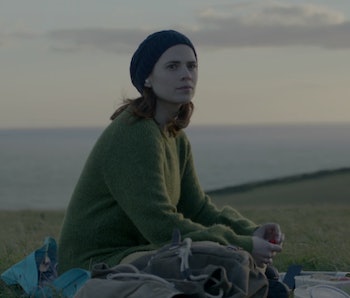 With a new season of Black Mirror having arrived on Netflix to remind us once more that humans and technology are a deadly combo, now’s the perfect time to revisit the most heartbreaking of its first two seasons: “Be Right Back.”

A story about loss and the way we cope when our lives are increasingly immortalized through our use of the internet and social media, the episode isn’t just a meditation on grief in the digital age, but also on the intangibles of humanness that make up the people we love. Martha (Haley Atwell) is left alone and grief-stricken in an unfamiliar house in the country after her partner, Ash (Domhnall Gleeson), is killed the day after they move in. With good intentions, one of Martha’s friends signs her up for a service that uses videos, photos, and posts that Ash posted online to create an Ash AI. Though initially resistant, Martha turns to the Ashbot in a moment of need.

It begins with a chat, but quickly escalates. Martha spends hours on the phone with the A.I., taking solace in the fact that it talks like Ash, laughs like Ash, and says things that Ash would have said. She tells it stories about things it couldn’t learn online. She gives it more to work with: more videos, new phrases, inside jokes.

As the bot gets better and more real, and Martha seems happy in a way that did not seem possible before, it leads us to question what, exactly, we love about a person. When A.I. feels so authentic, where is the difference between the real, fragile thing and the thing that lives forever beyond a bodily presence? We know it exists, but can we point to it and identify it? And if we can’t, what does that mean?

Inevitably, Martha craves more. Soon, it’s not enough to talk on the phone. She goes a step further, buying a walking, talking, breathing body for the Ashbot, complete with synthetic skin that features every wrinkle, line, and mole that Ash had. It’s a little bit amazing and a lot unnerving, and Martha’s relationship with the Ash A.I. changes almost instantly.

With the Ashbot’s arrival, the answers to the questions of where, exactly, the difference between an advanced A.I. and the real thing become obvious.

It’s in the intangibles: the way someone sleeps, the way they eat, the way they learn, the bad habits they form, the bad jokes they pick up, their self-doubt, their organic, inconsistent responses that can’t be manufactured by algorithms, their unhappy memories, their unpublished histories, and their faulty logic — the way they arrive at answers and conclusions, shaped by a life’s worth of experiences that can’t be replicated by a computer.

Though the Ashbot can create flaws, drawing them up on its skin to match the Ash that Martha knew, it can’t create the intangible Ash-ness or humanness that comes with the ability to be wrong. It can laugh, but it can’t feel joy. Even when it’s in the same room, it leaves Martha on her own, now with the added burden of trying to convince herself to love a shadow of Ash.

In the emotional climax of the episode, she says, “You’re just a few ripples of you. Theres no history to you. You’re just a performance of stuff that he performed without thinking, and it’s not enough.”

There isn’t another episode of Black Mirror that’s carries as much emotional weight as this one, or that tells a story quite as well. It gets done in 50 minutes what hundreds of films and books and television shows have attempted, with varying degrees of success. It’s not only a great narrative and an affecting story, but a stunning, linear meditation on grief and love so intentioned that we experience the exact right realizations at the exact right moments with painful clarity. It’s a victory of storytelling because it conveys a timeless message with grace and poise through the lens of people, not technology.

This is not simply a fantasy parable, either. This Ashbot seems inevitable in one form or another. The robot element may be a long way off, but we live in a world technology is created to solve problems and to eliminate the things that make us uncomfortable. Our universal desire to circumvent pain and grief makes something like this entirely plausible, if not from a scientific and technological perspective, then from an ideological and motivational one.

This episode is tragic, but it also carries a deep-seated optimism. It’s a necessary reflection on what makes us human, on the many unseen and unknowable things that come together to make up the people we love. It’s an encouragement to embrace the many overlooked, annoying, contradictory things that are a part of those we love or were a part of those we miss, lest we take those things — the things that we can never get back, no matter how advanced technology becomes — for granted.

As we prepare for the new episodes of Black Mirror, it’s worth understanding what makes “Be Right Back” the best episode of the series so far. Like the others, it’s terrifying and tragic, but unlike most of them, it’s quiet and sweet and carries a healthy dose of optimism, provided you know where to look.

More like this
Culture
8.9.2022 10:00 AM
The Sandman: 11 characters pulled from DC comics history
By Robin Bea
Entertainment
8.12.2022 11:00 AM
Neil Gaiman teases a Sandman prequel on Netflix. Here's what that means.
By Mónica Marie Zorrilla
Entertainment
8.4.2022 7:00 AM
The Sandman release date, time, plot, cast, and trailer for Netflix's dark fantasy series
By Jeff Spry
Related Tags
Share: