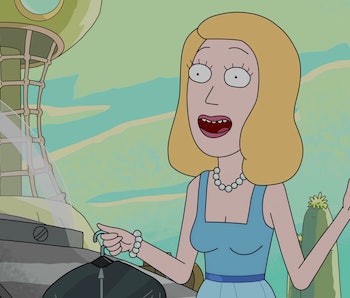 Ahead of Rick and Morty Season 4, the biggest question on everyone’s mind is whether Beth Smith has always been a clone. With all the dimension-hopping Rick and Morty do, it’s often difficult to figure out the realities of every version, much less whether or not someone is a clone. However, at the end of Season 3, Beth got a major reality check.

In the episode “The ABC’s of Beth”, Rick made Beth an offer she might not have refused: he offered to clone her so she could go on her own adventures without having to worry about her children and responsibilities. Presumably, no one would ever know the difference between the two. This turn of events caused fans to speculate about whether Beth has been a clone this whole time, but a new theory provides evidence to the contrary.

Warning! Speculative spoilers ahead for Season 4 of Rick and Morty.

The end of Rick and Morty Season 3 leaves Beth’s decision open-ended. We never find out whether or not she took up the offer, but the very next episode found Beth in the midst of an identity crisis. Was she really a clone or was she real? It didn’t help that when Beth asked Rick directly, he refused to answer, adding to the ambiguity of the situation. So, fans spent the summer pondering whether or not Beth was the real Beth and what the consequences would be for Season 4 of the show.

Reddit user XXHyenaPseudopenis wanted to put fans’ minds at ease — they were having their own versions of a Beth identity crisis — and offered up some evidence that suggests Beth is not a clone, after all. It all boils down to shared memories and what Rick could have omitted if Beth was actually a clone.

“If Beth was a clone, she wouldn’t remember the interaction asking to leave to go amongst the stars,” writes the theorist.

This makes sense. Rick is far too intelligent to create a clone of his daughter and not erase the part of her mind that recalls the moment the offer was made. Why would he allow her to believe she is a clone, if she actually is? After all, Rick has the use of Morty’s Mind Blowers at his disposal and he could “make the clone forget” instead of driving herself crazy worrying about the reality of who she might be.

Additionally, if she did want to go off and explore the stars without having to worry about her family, the extra baggage of having her clone ruin her chances makes things more complicated. Or, that’s exactly what Rick and Morty wants. After all, it’s possible for Season 4 to give us a Beth vs. Beth situation, especially if the real Beth comes back to reclaim her place.

Rick and Morty Season 4 premieres Sunday, November 10 on Adult Swim. The first three seasons are available to stream on Hulu.