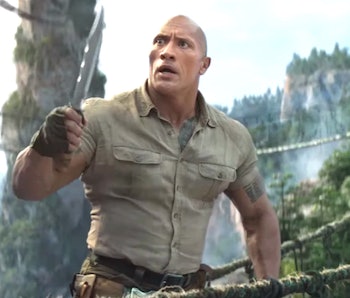 This article about the film Jumanji: The Next Level was originally published on July 1, 2019 and updated on May 29, 2021 following the movie's release. Read on for the original article, with some new changes to reflect the latest updates on this topic.

On an unassuming Monday in July 2019, the first trailer for the Jumanji film, Jumanji: The Next Level, landed in our laps. This was the third film in what has become a successful franchise after 2017’s Jumanji rebooted the 1995 Robin Williams classic.

Based on a picture book, the Jumanji is simple but intriguing: A magical game has the ability to transport jungle creatures and even full environments into our world (or pull players into its world). The original Jumanji followed this to a T, while Welcome to the Jungle flipped the script and transported its teenage protagonists into the actual jungles of Jumanji, also replacing the board game with an archaic video game console.

Now, The Next Level returned to the jungle of Jumanji for another truly wild ride. Here’s everything we know about Jumanji: The Next Level.

When did Jumanji: The Next Level (2019) release in theaters?

Jumanji: The Next Level was released December 13, 2019 in theaters everywhere.

Is there a trailer For Jumanji 3: The Next Level?

The first full-length trailer was released on July 1, 2019. You can watch the trailer below.

Who directed Jumanji 3: The Next Level?

Jake Kasdan, who directed Welcome to the Jungle, is back on board for The Next Level. Kasdan has been working in film and television for more than a decade, racking up credits on movies and TV shows like Sex Tape, New Girl, Walk Hard: The Dewey Cox Story, and Freaks and Geeks. The name “Kasdan” may ring a bell when it comes to adventurous films because Jake’s father, Lawrence Kasdan, is the screenwriter behind Raiders of the Lost Ark, Return of the Jedi, The Empire Strikes Back, Silverado, Wyatt Earp, and much more.

Who in the cast is Back for Jumanji 3: The Next Level?

Thankfully, The Next Level was chock-full of characters from Welcome to the Jungle and some newcomers along for the ride, too (more on that below). Here’s a quick rundown of all the returning actors and the roles they’ll be reprising for the next film:

Who are the newbies in Jumanji 3: The Next Level’s cast?

While a majority of the returning cast included key characters from Welcome to the Jungle, there will be some exciting new additions too. As revealed in the trailer, Danny DeVito, Danny Glover, and Awkwafina will join The Next Level. DeVito played Spencer’s grandfather, and Glover played Eddie’s estranged friend, both of whom end up getting sucked into the game. Awkwafina played a new avatar in the game named Ming Fleetfoot, a thief skilled in burglary.

What is the plot of Jumanji: The Next Level?

The Next Level takes place 2 years after the previous film, with the quartet of students reuniting over Christmas break after going their separate ways for college. Feeling like he has no purpose, Spencer dives back into the Jumanji game, followed by his friends. But things are slightly different, with Eddie and Milo going into the game, creating a chaotic swapping of avatars. Now everyone has to get their stories—and identities—straight as they attempt to get a magical necklace back from warlord Jurgen the Brutal and save Jumanji.

Were there any Easter Egg references to 1995’s Jumanji?

Welcome to the Jungle did a slick job of tipping its cap to the first Jumanji film when it revealed that the hideout used by Seaplane McDonough was actually the homestead of the young Alan Parrish built when he got stuck in Jumanji in the 1960s. The film was also set in the New England town of Brantford, the same town as Jumanji.

The Next Level’s biggest reference came in the return of a character. Bebe Neuwirth appeared as Nora Shepherd, someone who has taken over Eddie’s diner. Nora also appeared in the original film as the aunt of Peter and Judy, who wanted to turn their house into a bed and breakfast. It looks like that business acumen paid off!

How did Jumanji: The Next Level do at the box office?

Jumanji: The Next Level grossed $320.3 million in the United States and Canada, and $479.7 million in other countries, for a worldwide total of $800.1 million.

What did critics have to say about Jumanji: The Next Level?

Jumanji: The Next Level has a 72% rating on Rotten Tomatoes, a score of 58 on Metacritic, and an A- on CinemaScore. Overall, critics were satisfied with the sequel, saying the remixing of characters allowed the comedy to continue to shine.

Will there be a Jumanji 4 film?

In December 2019, Dwayne Johnson revealed not only that villain Jurgen the Brutal was an avatar, but his character would be explored in a future film. In April 2020, director Jake Kasdan followed that up by announcing another movie would be in development, hoping to bring the core cast back once more.

Would another Jumanji film take us back into the game? The way The Next Level ends indicates we may be going outside of the pixels. The film's final scene shows a pack of ostriches from the game running past LaMorne Morris’ late-coming repairman. That means the next movie could take a page out of the original film’s book, having our characters now deal with parts of the game coming to life.

Jumanji: The Next Level arrived in theaters on December 13, 2019.

More like this
Entertainment
Jan. 19, 2023
Netflix's next big sci-fi franchise finally has a release date
By Eric Francisco
Entertainment
Jan. 18, 2023
M3GAN 2.0 confirmed: Everything we know about the killer doll sequel
By Mónica Marie Zorrilla
Entertainment
Jan. 25, 2023
Polite Society breaks the mold for the coming-of-age movie
By Andy Crump
LEARN SOMETHING NEW EVERY DAY.

This article was originally published on July 1, 2019