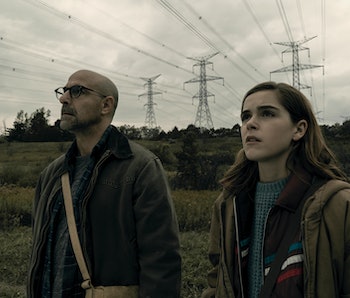 This article about the movie Captive State was originally published on March 29, 2019 and updated on May 6, 2021 following the film's release. Read on for the original article, with some new changes to reflect the latest updates on this topic.

Netflix’s next great sci-fi apocalypse is even closer to resembling A Quiet Place than Bird Box, the streaming platform’s hit end-of-the-world story involving sensory deprivation. Directed by John R. Leonetti (Annabelle), The Silence stars Stanley Tucci and Chilling Adventures of Sabrina star Kiernan Shipka as a father and daughter struggling to survive the end of the world.

Here’s everything we know about the 2019 film.

What is the plot of The Silence?

The general gist of The Silence is pretty much identical to A Quiet Place: Alien monsters that hunt by sound drive humanity towards extinction. Except rather than the massive, powerful hunters of A Quiet Place, the alien threat in The Silence is flying creatures that resemble large bats. (For D&D fans out there, they remind me of Stirges but blind.) The family at the center of the story also includes a deaf daughter … just like A Quiet Place.

Where The Silence really deviates is in a subplot involving a “sinister cult” that seems to worship the apocalypse in a way that bears a striking resemblance to what happens in Bird Box. To call The Silence a collision of these two recent films becomes very accurate.

When the world is under attack from terrifying creatures who hunt their human prey by sound, 16-year old Ally Andrews (Kiernan Shipka), who lost her hearing at 13, and her family seek refuge in a remote haven. But they discover a sinister cult who are eager to exploit Ally’s heightened senses.

The Silence is based on a 2016 novel by Tim Lebbon of the same name. Lebbon is a New York Times bestselling author best-known for writing the novelizations for 30 Days of Night and The Cabin in the Woods. Lebbon’s site offers an alternate summary of the story, calling the creatures a “deadly, primeval species who have bred for decades in the pitch darkness of a vast underground cave system, hunting only with their acute hearing.”

When was The Silence release date?

The Silence was released on Netflix on April 10, 2019. It came just a few days after Shipka’s Chilling Adventures of Sabrina Part II hit Netflix as well. The film was also released in theaters in seven markets worldwide, including China, Germany, and South Korea.

Is there a trailer for The Silence?

Yes! Netflix released a trailer for The Silence on March 29, 2019, only a couple of weeks before releasing the film.

Who’s in the cast of The Silence?

Stanley Tucci plays the father with Kiernan Shipka as his 16-year-old deaf daughter. Playing the mother is Miranda Otto, who stars as Zelda Spellman in Chilling Adventures of Sabrina alongside Shipka. The rest of the cast includes John Corbett, Kate Trotter, and Kyle Breitkopf, among others.

What did critics have to say about The Silence?

The Silence has a 29% rating on Rotten Tomatoes and a score of 25 on Metacritic. Many were critical of the choice to cast Kiernan Shipka as a deaf character and its resemblance to A Quiet Place, which many felt was superior.