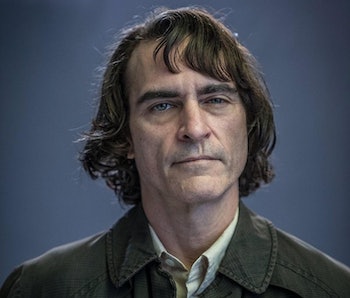 This article about the film Joker was originally published on April 3, 2019 and updated on May 7, 2021 following the film's release. Read on for the original article, with some new changes to reflect the latest updates on this topic.

The story of the Joker has finally been revealed (again). In 2019, Todd Phillips, best known as the director of The Hangover movies, unleashed Joker, a gritty crime thriller that explores a failed comedian’s descent into a life of villainy. The film stars Joaquin Phoenix in his own original interpretation of the character, best known as Batman's nemesis.

In a time when superheroes bend audiences to their will, Joker is poised to reinvent the popular genre. This isn’t a typical comic book movie. It’s not even trying to ape Logan as a neo-western superhero. Joker is straight up a crime drama and a passion project of its lead star.

Here’s everything you need to know about Joker, including its release date, awards, and just how in the hell this movie came to existence.

When was the Joker release date?

Where can I watch the trailer?

Several months later, the final trailer premiered in August 2019, only a month and change before the movie premiered.

What’s the last image of Joker?

In December, director Todd Phillips shared an Instagram photo of himself in a hospital setting, revealing that production has wrapped on Joker. As the trailer later confirmed, that hospital turned out to be Arkham Asylum, the famed fictional institution where Gotham City locks its worst criminals and throws away the key. (They still get out, anyway.)

Who played the Joker?

Phoenix has been interested in doing a superhero movie for some time, but wanted something different and smaller than the typical blockbuster.

“Three or four years ago, I called my agent and said ‘Why don’t they want to take one of these characters and just make a lower budget film about it, a movie but a character study, and why not take one of the villains?’” Phoenix told Collider in a July 2018 interview.

Assuming Joker was off the table, Phoenix looked for other characters, and even rejected a meeting with Warner Bros. “So I completely forgot about it, and so then I heard about this idea, I was like, ‘Oh that’s so exciting, that’s the kind of experience I wanted to have, with a movie based on a comic character.’ I felt like you could get something on screen.”

What did Joaquin Phoenix look like as the Joker?

There’s a bunch of photos from the film’s New York and New Jersey sets online, but Warner Bros. and Phillips released an official reveal, which you can see Joaquin Phoenix as “Arthur Fleck” below.

What’s the story about? Has Joker’s origin really never been told?

The movie Joker explores how Arthur Fleck — a name never before seen in any Batman media — becomes the Joker. But the Joker’s name has never been revealed, and his true identity remains a mystery. That’s his appeal.

“Jack Napier,” which was the identity of Jack Nicholson’s Joker in 1989’s Batman, was officially given to the Joker in the 2017 miniseries Batman: White Knight, which took place outside DC’s mainstream canon.

Meanwhile, the FOX television series Gotham, which had Cameron Monaghan as “Jerome Valeska,” spent several seasons toying with whether or not Jerome is in fact the Joker that Batman grows up to fight.

Only one Joker origin has defined the popular imagination. In 1988, Watchmen writer Alan Moore penned Batman: The Killing Joke, a one-shot comic that showed how a struggling comedian was tricked into being a fall guy, which led to a horrible accident that turned “Jack” into a psychotic villain.

Despite Moore disowning the work, fans revere The Killing Joke, and its influence is undeniable in Todd Phillips and co-screenwriter Scott Silver’s story.

Does Joker take place in the DC Extended Universe?

No. The film is not in canon with movies like Man of Steel, Batman v Superman, Justice League, or Aquaman. In fact, it takes place in a different time.

As confirmed by supporting actor Shea Whigham, who plays a Gotham City detective in the movie, Joker is set in 1981. The movie will portray a Gotham City that closely mimics the dirtier, seedier New York City of the same era, when Times Square was called by Rolling Stone “the sleaziest block in America.”

Gotham City will be literally dirty, too. Apparently, a subplot of the film involves a mass trash worker strike throughout Gotham, leaving the city’s streets overrun by mountains of trash. Photos of the film’s Newark, New Jersey set reveal production hands piling fake garbage bags for the movie.

So if Jard Leto’s Joker wasn’t your thing, fret not. You won’t have to worry about watching Suicide Squad ever again.

What’s this about Alec Baldwin and Donald Trump?

Yeah, about that. Here’s the gist: For a time, it was rumored Alec Baldwin, who has a pretty mediocre impersonation of Trump on SNL, would play Thomas Wayne — the doomed father of Bruce Wayne — in Joker. Remember, Joker is a distant prequel, its story taking place long before that fated night Bruce Wayne becomes the vengeful superhero we all know and love.

Anyway, it turned out to be false, but emerging set photos and footage of Joker revealed that Thomas Wayne is indeed a Trump-like figure. A big scene shot inside New York subways revealed extras carrying anti-Wayne signs, some of which read “FASCIST WAYNE” and “CLOWN MAYOR.”

It was in the 1980s when Donald Trump emerged as a celebrity millionaire, slapping his name onto lame consumer products and gaudy casinos. It appears in the Joker universe, the Waynes are Gotham’s Trumps. (Does that make Bruce the Eric, Don Jr., or Barron?)

I heard the actors peed on set?

Yeah, there was a really bad situation that happened on set. Extras were allegedly trapped for hours inside a subway car, which was a clear violation of SAG-AFTRA rules. The matter appears to have been resolved.

Is Batman in this thing?

No. But the 1966 version of the Batmobile has been spotted on set.

How did Joker do at the box office?

Joker made a killing at the box office. It grossed $335.5 million in the United States and Canada, and $738.5 million in other territories, for a worldwide total of $1.074 billion. It is currently the highest-grossing R-rated film of all time and the only R-rated film to make over a billion dollars. Also, due to its small budget, Joker has made the biggest profit of any comic book movie yet.

What did critics have to say about Joker?

Joker has a 68% rating on Rotten Tomatoes and a score of 59 on Metacritic. Despite the box office success, reviews were surprisingly mixed. Many had high praise for Joaquin Phoenix’s performance and the chilling and grounded tone compared to other superhero films. But criticism was reserved for Todd Phillips’ direction and lack of originality, comparing it to the films of Martin Scorcese.

Did Joker win any awards?

Joker received 11 Academy Award nominations in 2021, including Best Picture, Best Director, and Best Adapted Screenplay. It would ultimately win two: Best Actor for Joaquin Phoenix (making him the second actor to win an Oscar for playing the Joker) and Best Original Score. The film won those same two awards at both the Golden Globes and the BAFTA Awards.

Will there be a sequel to Joker?

Yes! Originally, DC and Warner Brothers expected Joker to be a standalone film with no sequels. But with the movie’s success, talk began to stir of it starting “DC Black,” a line of superhero films that were darker and more experimental. After many rumors floating around, The Hollywood Reporter confirmed in May 2021 that a sequel to Joker was in the works, with director Todd Phillips, screenwriter Scott Silver, and Joaquin Phoenix all expected to return.

Joker was released in theaters on October 4, 2019.