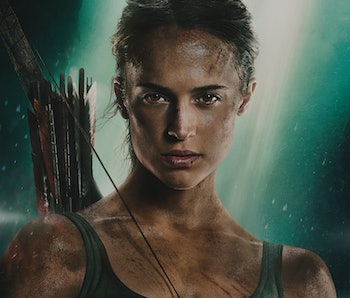 It’s finally happened: There is a decent action movie based on a video game. The new Tomb Raider succeeds as a solid popcorn movie buoyed by the magnetic Alicia Vikander, who kicks ass as the reimagined video game icon. It’s a good movie that suffers just a few problems before ultimately succumbing to the worst video game pitfalls, with less grace than Pitfall. But because of the spotty history of video game movies, Tomb Raider is now one of the best video game movies of all time, surpassing a very low bar with some impressive effort.

No spoilers ahead for *Tomb Raider.

If your only memories of Tomb Raider is of the exploitative, polygonal avatar from 1996, you’ll be happy to know that Lara Croft has evolved in the last twenty years. The PlayStation games that nineties kids played are relics compared to the newer, modern titles, like 2013’s Tomb Raider and 2015’s Rise of the Tomb Raider. Those games reinvented Lara Croft into a gritty survivalist, an archetype director Roar Uthaug takes after significantly, down to recreating several of the games’ big set-pieces into film. It mostly works: When Lara jumps out of a derelict plane over a waterfall, you feel the rush. This focus on survival that defined the new games make for a thrilling adventure. Unfortunately, the story in between is not so thrilling.

In Tomb Raider, Lara Croft (Vikander) is the heir to a vast fortune but spends her days making ends meet as a London courier. Forced to finally declare her missing father deceased, Lara stumbles upon a trail that leads her to a dangerous, remote island off the coast of Japan. Shipwrecked with a rough sea captain, Lu Ren (Daniel Wu), Lara evades a paramilitary group called Trinity — which seem to know more about her father than she does — while attempting to finish her late father’s last work.

The things Tomb Raider gets wrong are few, but glaring. The villain, played by Walton Goggins, is so plain I can’t remember his name. (Wikipedia check: It’s Mathias.) The “tomb puzzles” are so dumb that the tension in Lara needing to solve them is way undercooked. The film doesn’t bother explaining how one puzzle, which Lara needs to crack open a gate, is supposed to work, so we’re just watching Lara move shit in quick, boring cuts.

But what Uthaug gets right is presenting a vastly more interesting Lara Croft than Angelina Jolie’s ever was. In 2018, Lara Croft isn’t superhuman but she is super-capable. This isn’t a Tomb Raider afraid to get her ass kicked, delivered in equal amounts by the bad guys and by mother nature. This struggle works in making you want to root for her, even when she survives harrowing situations that are too clearly shot in green screen.

Lara’s first kill is also a sight to behold. In a long, dirty, and score-less sequence, Tomb Raider peaks in a dark subversion of the action genre. While John Wick and John McClane race for the highest body count, Lara Croft ponders the weight of killing one man. And for fans, it’s a moment straight from the recent games. This is Tomb Raider at its peak, when it’s not just a faithful adaptation but a thoughtful action movie. Who would have thought Tomb Raider would posit the moral quandary of righteous bloodshed?

Unfortunately, the film takes after the games too much. Akin to the abrupt shift in tone players experienced before, Lara goes from “What have I done?” to bulls-eyeing goons with her bow and arrow in record time. As the Trump White House tries to dust off the question of video game violence — which science has put to rest, many times — it would have been interesting if, of all movies, Tomb Raider is the most conscious of what survival actually means, and at what cost. And Tomb Raider nearly succeeds, before blowing it because it suddenly remembers it’s a video game movie. To top it off, a shameless mid-credits scene teases Vikander into looking more like her PlayStation ancestor, which hinders what could have been the true rebirth of a pop culture icon.

Tomb Raider could have been a great action movie that sneaks in some compelling subversion of action movie excess. Instead, it rests on its laurels as a decent movie with an engaging heroine, whose audience expect her to kick ass (as she does). Even sweeter is that it’s the best video game movie adaptation since 1995’s Mortal Kombat, released an entire 23 years ago.

Tomb Raider is as fun and safe as staying at home playing video games. That’s not a waste of time, not really. That’s just a Sunday afternoon well-spent.

Tomb Raider is in theaters March 16.

More like this
Entertainment
Jan. 25, 2023
Polite Society breaks the mold for the coming-of-age movie
By Andy Crump
Entertainment
Jan. 30, 2023
Tomb Raider is Becoming a TV Series — The Last of Us Shows How It’s Done
By Eric Francisco
Entertainment
Jan. 26, 2023
Teen Wolf: The Movie is fan service done right
By Mónica Marie Zorrilla
LEARN SOMETHING NEW EVERY DAY.
Related Tags
Share: