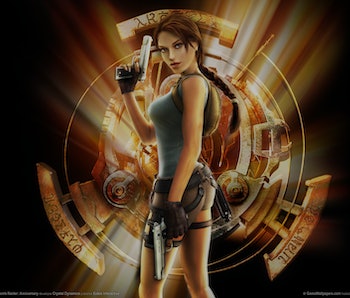 Earlier this month at the Xbox Live store, Square Enix’s Tomb Raider: Definitive Edition was on sale for $10, less than the cost of my MetroCard for a week. I quickly bought it.

Having missed out on its original release in 2013, I’ve only heard it’s the legit comeback of Lara Croft, the once-dominant avatar of my escapist, pre-adolescent fantasies. I’ve also been told she’s no longer a magazine spread, but a real, compelling avatar of survival. After playing it, I believe the hype: Lara Croft isn’t just back, she’s evolved. I can’t wait for Rise of the Tomb Raider, out for Xbox One later this fall.

But how far has she come?

It’s funny that the reverence for New Lara as gaming’s social progress is hinged by her inexperience. In the 2013 reboot developed by Crystal Dynamics, she’s a young archaeologist on a voyage to find a lost Japanese civilization. She’s barely seen a gun when her crew are shipwrecked on a remote island. Lara must survive against nature and man, wolves of all kinds, while continually proving her theory of an ancient society correct. She’s a whip-smart nerd made of iron, and the new game is her transition into perhaps one day becoming the gun-toting “Tomb Raider” as we first knew her almost twenty years ago.

Maybe. I like to think this rebooted Lara is or will be better than her previous self.

Released to critical and commercial acclaim in 1996 for the Sony PlayStation, Sega Saturn, and PC, Eidos Interactive’s original Tomb Raider was a monumental action-adventure platformer that created a pop culture icon in Lara Croft and was a pivotal conduit for debate on feminism and gender in gaming. It was also a game where you shoot down a T-rex and a maniacal bro on a skateboard.

The game’s story is a polygonal interpretation of ‘90s Saturday action matinees, complete with a globe-trotting scope with auburn photography. The laptop Lara makes contact with the game’s inciting incident and eventual final boss in the opening cut-scene is gray and hilariously a brick. The dialogue reeks. Lara is just too cool, programmed that way, not written.

Tomb Raider 2013 is a well-plotted tale of perseverance, where a woman tames the natural elements and overcomes stacked odds. Tomb Raider 1996 was an action movie turned game, squishing Indiana Jones and James Bond into a shapely female.

On a technical level, Tomb Raider was innovative for its 3D environments that demanded exploration as required by its premise of, uh, tomb raiding. But this being 1996, the environments weren’t all that. You can climb ledges, swim, climb ledges, and sometimes if you’re lucky, climb other ledges. Though Lara is a hardened adventurer, she is incapable of crouching and crawling, which I’ve done with precision on playgrounds when I was 7. (It’s a stunning coincidence that none of the caves she traverses have crevices lower than her waist.) Still, it was the game Adventure and Pitfall on Atari wanted to be, with a protagonist that was easy on the eyes who can stylishly shoot like she’s in a John Woo movie, albeit with shittier aim than a Stormtrooper.

I’ve made mention of Lara’s figure several times on purpose. The original game, in bold letters at the top, actually says, “SOMETIMES HAVING A KILLER BODY ISN’T ENOUGH” on the back of the case. Is Lara Croft problematic? Is she feminist? Are the games sexist? Are we to blame? Is there anything to blame for? I will never defend chauvinism, but there is a reason Lara’s notorious proportions were what they were: It was a mistake. A mistake they kept. In the 2001 episode of G4tv’s Icons, Eidos developers were vehemently vocal about their anti-sexism and their reverence for Lara Croft’s creation. Yet until 2008, the franchise’s marketing team hired actresses, gymnasts, and glamour models to give the character flesh in promotional events, a Lara Croft you could touch (with security, making it more like like Disneyland’s cast members, but still).

Tomb Raider is Lara Croft, franchise and hero are one. These games have never and can never star anyone else. When she was thought to have been killed in 1999’s Tomb Raider: The Last Revelation, its creators spent the next installment with Tomb Raider: Chronicles a flashback episode like in a sitcom but as a whole game, and the very next installment bringing her back in Tomb Raider: The Angel of Darkness. And I love her, as much as you can love something in a reasonable way that exists only in ones and zeroes. She’s attractive and inspiring — I seriously encourage everyone to play the 2013 reboot.

Croft’s novelty as a strong, sexy woman in gaming is very responsible for the franchise’s enduring success. Though I try hard to learn about the world beyond what I see as a straight dude, it isn’t enough. This week, I’ve welcomed fellow Inverse writer Gem Seddon, a wonderful wordsmith whose finger is on the nerdy pulse like mine is, to finish this entry with a woman’s perspective.

Gem: Much has been made of Lara Croft and her buoyant bosom. Like Barbie, her exaggerated proportions became a massive talking point when the first Tomb Raider game was released. She’s a construct pandering to the male gaze, people said. She’d be unable to walk, never mind leap with bazungas that size, some other people probably said. I’m not a frequent gamer so I remained unfazed by the logistics of her abilities. What she represents to me is way more appealing — another female in popular culture who kicks arse. Naysayers who cling to the most detrimental aspects of her creation are missing the point. Struggle to look past her pneumatic physique (like the alliteration so far?) and you won’t see all the goodies beneath.

Croft is adventurous, smart, courageous, self-employed, witty… honestly, there’s tons of adjectives I’d use to describe the sassy raider of tombs. That’s not to say her aesthetic is solely reserved for male scrutiny, with women only able to enjoy other women if they’re physically flawed or impossibly proportioned. However you dress up the argument, she’s hot.

For me personally, Croft is synonymous with Angelina Jolie, who, at the time was moving into the Hollywood mainstream. I’d had a fascination with her since I saw Hackers in 1995 at age 13, and it wasn’t until I saw her in Foxfire a few years after that it all slotted into place. I had been ‘out’ for a year or so by the time Tomb Raider opened and was coming to terms with what that all meant. The film itself is nothing to write home about. Watching Jolie as Croft is.

Paramount’s intentions to capitalise on the male gaming demographic who’d lusted after her pixellated form, managed to snare me - and no doubt countless other lesbians - into that category. It was more than that, though. Let me put it this way. We’ve all crushed on hotties who possess the depth of a puddle. That attraction soon sours. Croft’s sexual magnetism, of which she’s got bucketfuls, only functions, only exists because she’s got ambition. She’s an object of desire and an object to be desired — you want her, and you want to be her.

Lara Croft’s not perfect. That’s why she’s a damn fine role model if you ask me.

Note: The banner image comes from Tomb Raider: Anniversary, a 2006 remake of the original 1996 game produced for the franchise’s tenth anniversary.

More like this
Entertainment
Jan. 30, 2023
Tomb Raider is Becoming a TV Series — The Last of Us Shows How It’s Done
By Eric Francisco
Entertainment
Jan. 28, 2023
Where and how to watch the 2023 Oscar nominees
By Mónica Marie Zorrilla
Gaming
3 hours ago
Here’s exactly how long it takes to beat Hogwarts Legacy
By Steven Asarch
LEARN SOMETHING NEW EVERY DAY.
Share: