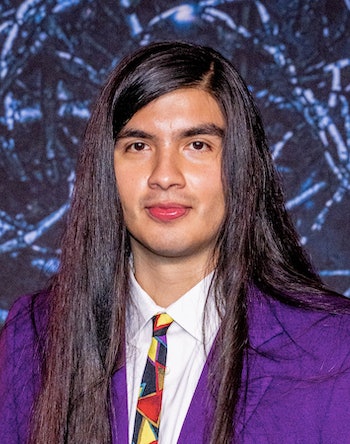 Of all the heroes featured in Stranger Things, few were as unlikely as Argyle.

The perpetually stoned pizza delivery driver (played by Eduardo Franco) makes his debut in the Stranger Things Season 4 premiere as Jonathan Byers’ (Charlie Heaton) closest and chillest California friend. But it isn’t long before Argyle’s unwavering stoner demeanor is thrown out the window when he’s forced to help Jonathan and his friends escape from a squad of trigger-happy government agents. Later, in the season finale, it’s Argyle who comes up with the perfect way for Eleven (Millie Bobby Brown) to mentally reach out and fight her nemesis, Vecna (Jamie Campbell Bower).

“If we can’t have peace on Earth, at least there’s Stranger Things.”

In a show practically overflowing with characters, Argyle’s heroic efforts — along with his refreshingly West Coast attitude — made him one of Stranger Things Season 4’s standouts. Fans of the blockbuster Netflix series quickly embraced Argyle, and the weight of that overwhelmingly positive reception isn’t lost on Franco.

“Was I nervous? F*ck yeah, man. I was so intimidated. I was just trying to wrap my head around it the whole time,” the Stranger Things star tells Inverse. “I’m grateful that, under such crazy circumstances, I got to be in the show. It’s an honor and a privilege to have been a part of it.”

During a conversation with Inverse as part of our annual Scene Stealers series, Franco looks back on how he was cast as Argyle in Stranger Things Season 4, shares some of his favorite memories from the Netflix drama’s set, and reveals which of the show’s characters he’d like to team up with in the series’ fifth and final season.

Do you remember how Argyle was first described to you by the Duffer Brothers?

I had auditioned several times already to be on the show, and when I finally got this audition, the breakdown basically was that he was just some stoner type of guy. After I auditioned, my reps hit me up one day and were like, “Hey, so Shawn Levy wants to call you and talk to you about auditioning again.”

So Shawn called me and said, “Dude, can you read this scene again? This time, read it like the high has worn off. Read it like you’re completely sober now, and you’re completely aware of everything that’s going on. The characters are dealing with some real sh*t, so you should be frantic and panicked.”

I was like, “Hell yeah, OK.” I sent him a video of me reading it the new way, and that was that.

What was it like joining the cast? Were you nervous?

Yeah. Definitely. It's such a massive global entity. It’s so beloved by so many people. It’s wild how many people of different origins and generations love it. But that’s the power of nostalgia, man. The show’s a phenomenon that the whole world seems drawn to. If we can’t have peace on Earth, at least there’s Stranger Things.

Wherever you go — it doesn’t matter if there’s a language barrier — Stranger Things is there. It just seems like something everybody can sit down and get along about. So to answer your question: Was I nervous? F*ck yeah, man. I was so intimidated. I was just trying to wrap my head around it the whole time.

“My wardrobe was the least of my worries during filming.”

Argyle has such a fun, distinct look. How quickly did you and the Duffer Brothers land on his costume?

We did a couple fittings with [Stranger Things costume designer] Amy Parris, and she’s awesome. She’s been killing it since Day One. All I really remember is they asked me, “What do you think about your clothes?” I said, “I love all the gear. It’s amazing, but we’re going to be in the desert, you know? I don’t know if all these layers are a good idea.” They said, “Yeah, we hear you, but it looks cooler with the layers.”

Yeah, man. That's literally what everything on TV is. All that matters is that you get the point across. It doesn’t matter whether something makes logical sense. What’s so insane about TV and movies is they can almost cloud that part of peoples’ minds. People can watch something that wouldn’t actually happen and still think “This is real.”

For example, my wardrobe was the least of my worries during filming. The pizza van, on the other hand. Those things were hunks of junk! They rigged them so they’d work and look nice on camera, but nobody should try to drive one of those things across the country or into the desert. The way we were driving them in the show? Don’t ever do that. Our stunt van had to be souped up and the engine had to be swapped out so we could peel out and drive it as fast as we needed.

What was the most memorable scene you got to shoot in Argyle’s van?

The craziest scene I got to do was when I drive up the hill to the Byers’ house and the kids are carrying the government agent’s body as they’re rushing to the van and those other military guys are trying to kill them. That was definitely the craziest thing, and mostly because it was a stick shift and I was driving uphill.

Thankfully, our stunt coordinator was amazing, and so was my stunt driver, Ernie Vigil. Those guys are all incredible. Ernie was in the van with me the whole time and he would say, “Hey, man, if anything happens, I got you.” He taught me how to really drive a stick shift.

What was it like to see Argyle be received so warmly by the show’s fans?

I’m grateful. This industry is crazy. People will just add new characters and ideas to shows that are so beloved by so many people, and if you’re the person who’s joining this thing that’s already been established, you find yourself under an insane amount of pressure. But I’m really grateful. If someone noticed my character or connected with him in any way, that’s incredible. If any joke I said or any bit that I tried landed and hit you in the funny bone, that’s great, too.

I never know what I’m going to do until the director starts shooting. I’m just constantly looking to get laughs out of the crew members. They’re the people who are lugging equipment around and get there at the crack of dawn. They’re the last ones to leave. So I’m always trying to get a laugh out of those people.

In our case, our crew was working during a pandemic with masks on even when it was hot and there were dust storms outside. They were working 300 days straight and exhausted, but they still managed to have a sense of humor. So if I could get a chuckle out of any of them, that was mission accomplished.

Do you know what lies in store for Argyle or are you still in the dark like the rest of us?

I’m in the abyss, dude. You probably know more than I do. I’m chilling with the anglerfishes right now. I have no idea what lies in store. Whenever I say that, though, people always tell me, “You just can’t tell me because you’re not allowed to.” No, I have no idea what’s coming. I haven’t been told anything. I have absolutely no clue what to expect.

Is there any Stranger Things character you hope Argyle gets to spend some time with before the show comes to an end?

Maybe some of the parents, man. Honestly, I’m trying to figure out what’s going on with these parents. Where the f*ck are they? What are they on? They just tell their kids, “Make sure you come home from school,” and then they don’t come home and all they do is ask “Where are they?” I just want to figure out what the hell is going on with all these moms and dads in Hawkins. What are they all up to all the time? They’ve got to keep a closer eye on their kids, man.

Do you have any other projects you’d like to promote or spread the word about?

Yeah, man. I’m in this rap group called Dumb B*tches W/ Internet. Go check out our music if you want. We’re working on new stuff constantly, and if you like rap music, give it a listen. If not, whatever, do what you want to do, you know? I’m not going to tell you what to do.