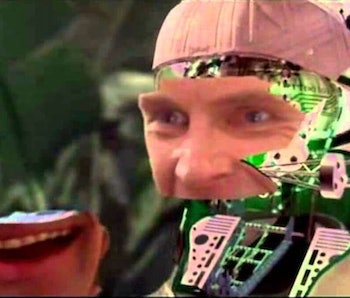 Some bad sci-fi movies should be avoided at all costs. Other disasters have to be seen to be believed. And although it’s difficult to comprehend that it even exists, the 1996 curiosity Lawnmower Man 2 falls into the second category. The right question here isn’t “How did it even get made?” but “What did this movie unintentionally teach us?” And the answer is that sometimes subgenres have to be destroyed before they can actually get good.

Lawnmower Man 2 not only represents the struggles of the cyberpunk subgenre in the ‘90s, but also accidentally predicts the challenges of all cyberpunk, forever. Watch it, and be baffled by it, before it leaves HBO Max on August 31.

The best way to approach Lawnmower Man 2: Beyond Cyberspace (sometimes subtitled Jobe’s War) is to think of it as an artifact. This is a sci-fi franchise film from a lost era, a moment in time when cheap sequels were churned out simply with the hope that the vaguest of name recognition would turn a profit. The first Lawnmower Man (1992) was a decent financial success for New Line Cinema, so it makes sense that a sequel would materialize.

That said, listing the missteps of Lawnmower Man 2 is almost too easy. While the first film blended near-future cyberpunk with the ethos of Stephen King, the sequel is more like a bad kids’ movie in which plucky tweens have to defeat a naughty man who’s trying to control the world through cyberspace. Lacking any of the effective horror of the original, the scariest thing about Lawnmower Man 2 is whatever’s happening in the unseen movie everyone apparently thought they were making. In several scenes, actors behave as though they’re auditioning for a David Lynch fan film. The stilted made-for-TV-dialogue is one thing, but the B-movie delivery is so unnerving it almost feels intentional. Almost.

The first Lawnmower Man explores the fate of Jobe, a disabled gardener subjected to a mad science experiment that turns him into an aggressive superhuman capable of living in cyberspace. The sequel fast-forwards to “the near future,” which suggests the entire world was transformed into Blade Runner in about six years. Charles Dickens-eque hacker urchins suddenly become the movie's focus, and they battle Jobe, who, after reawakening, decides to take over “cyberspace” and use it to conquer the real world. His deranged scheme falls somewhere between evil Jeff Bridges in Tron: Legacy and something Andrew Scott’s Moriarty might attempt in Sherlock.

On paper, one aspect of Lawnmower Man 2 should have worked. Although Jeff Fahey didn’t return as Jobe, Matt Frewer was recast in the role. The movie explains this away as Jobe needing reconstructive surgery after getting blown up in the first film, which is silly but fine. But what’s bizarre is how much putting Frewer into the movie doesn’t work the way it should.

Frewer was partially responsible for making virtual characters cool. In the 1987-1988 series Max Headroom, a watershed series that brought cyberpunk concepts and aesthetics to the mainstream, Frewer played the virtual star. Having Max Headroom himself in a movie about cyberspace and virtual reality horror should have been perfect. Instead, Frewer’s talents are wasted, because Lawnmower Man 2’s story and writing default to vague technobabble and shifting, confusing stakes.

But the instructive element of Lawnmower Man 2 isn’t that it’s a poorly made sci-fi sequel. That’s obvious. What’s interesting is how it hijacks a vague cyberpunk aesthetic and tries to substitute that feeling in place of an actual story. It’s fun to snicker at just how unrealistic some of the concepts in the first Lawnmower Man are, but it at least has some David Cronenberg-esque mood propelling the absurdity. Lawnmower Man 2 tries to rip off a kind of Blade Runner aesthetic but misunderstands why the aesthetic worked in the first place.

Ever since cyberpunk was introduced in the ’80s as a loosely-defined subgenre of sci-fi, the worst examples of it literally just wear the clothes but do nothing else. Even contemporary cyberpunk productions, like Altered Carbon, struggle with this problem. Good science fiction is more than rocket ships and robots, and good cyberpunk is more than just someone jacking into cyberspace to facilitate a story. Visionaries like William Gibson invented a literary shorthand for a brand of dystopic tech future, but the setting alone isn’t enough.

Like good noir, good cyberpunk is a blend of a specific aesthetic, a certain mood, and characters that affirm a transgressive jolt of individualism. Lawnmower Man 2 only has a phoned-in cyberpunk aesthetic, which was dated even for 1996. Johnny Mnemonic came out a year earlier and, compared to Lawnmower Man 2, it looks like a timeless masterpiece. If you’ve seen Johnny Mnemonic lately, you know that’s saying something.

Sci-fi ideas can’t save an undercooked story. Sometimes a movie can skirt by on genre vibes and overused tropes, but Lawnmower Man 2 is dead in the water even if a few redeeming elements are present. There is a better movie lurking beneath the surface, a movie that wasn’t trying so hard to dress up like the movie it thought it was supposed to be.

Some of this isn’t even the movie’s fault. The first film was so lauded for its CGI effects that a storyline about the technology took over the sequel’s plot. Lawnmower Man 2 makes a lot of mistakes in valuing style over substance. But because its progenitor was rewarded for pretty much the same thing, you can’t blame a scrappy cyberpunk sequel for trying.

Lawnmower Man 2 is streaming on HBO Max until August 31.