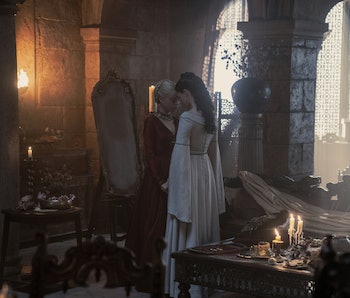 We hate to burst your gay-yearning bubble, but the “sapphic vibes” between House of the Dragon protagonists Rhaenyra Targaryen and Alicent Hightower are not in the show’s George R.R. Martin-penned source material, nor do they seem likely to continue on the series following the much-marketed time jump that marks this season’s halfway point.

Of course, that didn’t stop Milly Alcock and Emily Carey (who play the younger, pre-time jump versions of Rhaenyra and Alicent in the Game of Thrones prequel series) from telling Insider about the line between romantic and platonic affection blurred in their respective performances.

Let’s talk about what the future likely holds for these two princesses destined to be queens — and why it might not be what casual viewers have been led to expect.

Spoilers ahead for House of the Dragon.

While we don’t want to delve too much into the myriad of ways in which Rhaenyra and Alicent betray each other leading up to and during the Dance of the Dragons (the fiery conflict between Targaryen half-siblings), we do feel comfortable noting that their dynamic is never coded as amorous in the books.

In the source material, Rhaenyra and Alicent have a wider age gap than they do in HBO’s new adaptation. Alicent is about nine years older than Rhaenyra in The Princess and the Queen, the novella that charts the Dance of the Dragons. When Alicent first comes to court along with her father, Ser Otto Hightower, her mother, and many brothers, she is 13. At the time, Rhaenyra is 4. For obvious reasons, they do not initially connect as friends.

It’s unclear why HBO chose to close the age gap between Rhaenyra and Alicent. Was it to hint at a lesbian relationship? Was it to harshen the blow of Viserys marrying Alicent? Was it to make Rhaenyra a more interesting protagonist early on? The answer may be all of the above, but the end result, whether intentional or not, feels like queerbaiting.

And what of Rhaenyra and Alicent’s relationship in the series? Entertainment journalists were sent six of the 10 House of the Dragon Season 1 episodes to watch for review and for coverage planning purposes. The following revelation shouldn’t be considered a major spoiler — especially since the source material HOTD is (mostly) faithfully based on is widely available to read — but, thus far, there is no hint of Rhaenyra and Alicent’s relationship blossoming into anything other than contentious.

In truth, much of House of the Dragon is rooted in fictitious Targaryen history and aggrandized world-building, political intrigue, and oh-so-many dragons razing medieval-fantasy villages to the ground. House of the Dragon devotes little of its time to romance.

However, casual viewers who haven’t read the source material may instead base their expectations on marketing stills and teaser clips of Rhaenyra and Alicent looking at each other wistfully, grasping each others’ hands, and laying side by side together under a tree. They may think what they are seeing is a forbidden love story in the making when it is anything but that.

Queerbaiting is the term for any marketing strategy that uses the implication of a queer attraction, relationship, or identity where there is none. The tactic serves to attract LGBTQ+ viewers to a project without driving away any homophobic viewers in the process. It can be particularly difficult to determine if a TV show is queerbaiting at the beginning or even middle of its run, as the potential for a queer relationship to “become canon” is still there.

However, luring eyeballs to a show by subtly (or overtly) implying that homosexual love will be realized on screen and never acting on that subliminal promise is a marketing ploy done in poor taste — and one that had already been worn out by the plethora of shameless queerbait scenes in its predecessor, Game of Thrones.

Perhaps the most egregious were those involving Rhaenerya’s descendant, Daenerys (Emilia Clarke). In Season 1 of GoT, there were multiple scenes in which Dany’s handmaiden, Doreah (Roxanne McKee), was sent into Dany’s bed chambers to “teach” her how to please her Dothraki husband, Khal Drogo (Jason Momoa). This never happens in the books and only serves to appease the male gaze and to move Dany’s heterosexual relationship forward.

Later, the bond between Daenerys and her other handmaiden, Missandei, was often teased as being potentially sapphic, but that theoretical intimate connection never takes shape. In the A Song of Ice and Fire books, Daenerys has lesbian sexual encounters of her own accord and for her own pleasure, but this side of her character remains unexplored throughout the entirety of Game of Thrones.

Similarly, Arya Stark was coded as queer throughout GoT. So much so, in fact, that the actress who portrayed Arya (Maisie Williams) was stunned when she was told she was going to have a romantic scene with Gendry Baratheon (Joe Dempsie).

House of the Dragon has a chance to make different choices than its predecessor, providing meaningful storylines for its source material’s canon queer characters instead of generating interest for a romance that will likely never come to light. Perhaps the final four episodes of Season 1 — or Season 2, which has just been greenlit by HBO — will right this wrong. Only time will tell.

House of the Dragon airs Sundays at 9 p.m. on HBO and HBO Max.