“This is why we’re here” 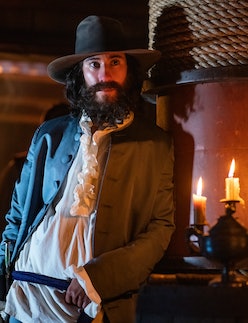 Our Flag Means Death is an old-fashioned show.

Not only is the new HBO Max series set in the past, but it also brings back the swashbuckling pirate action-comedy that hasn’t been seen since the heights of Pirates of the Caribbean. Created by David Jenkins, the series, starring Rhys Darby and Taika Waititi, focuses on the real-life figure Stede Bonnet, an aristocrat who decides to become a pirate and tangles with the infamous Blackbeard. But while its storyline is based on events that really happened in the 18th century, there’s one reveal that’s very much of the 21st century.

Mysterious mute crew member “Jim” is revealed to be a “woman in disguise,” a common trope in pirate stories because of historical records of female-presenting people taking on male guises as a sort of pirate alter ego. But what Our Flag Means Death does differently comes after Jim’s true identity is revealed, and it may actually be more historically accurate than anything we’ve seen before. Inverse spoke to the stars and creator of the series about why crafting and portraying stories about trans and nonbinary characters are so important.

“It feels like we’re reclaiming the trans and nonbinary stories that oftentimes get overlooked in history books,” says Vico Ortiz, the nonbinary/genderfluid actor, who uses they/them pronouns and plays Jim.

Ortiz’s character is a focal point of Our Flag Means Death Episode 2, where the bumbling scribe Lucius catches Jim bathing without their fake beard and nose. He immediately freaks out and swears to keep mum, saying, “I’m so good at keeping secrets, my mom thought I liked girls for years!”

Jim isn’t initially convinced, but after an adventure with Spanish Jackie, Lucius proves he’s worthy of Jim’s secret. Despite all this fuss over identity, both members of the Revenge crew, who know Jim’s secret, never once refer to them by their old name. Jim is Jim, and that doesn’t change whether they’re wearing the fake beard or not.

For Ortiz and many other nonbinary people (myself included), acting is a way to explore gender identity in a “safe” way.

“I was always like, ‘Why do I feel so comfortable with this?’” Ortiz tells Inverse of their previous gender-bending roles. “But I would always say, ‘It’s just a character, it’s not me! It’s not me!’ As I spoke to more trans people, I realized why it resonated.”

Our Flag Means Death unravels Jim’s story in an extremely similar way. They adopt a new persona out of necessity and to escape a previous crime that leaves a bounty on their head. But Jim realizes after presenting as male for a while that they actually feel more comfortable, especially on a ship full of pirates.

A “woman in disguise” who continues to be referred to as male may seem like a 21st-century invention baked into this period storyline. But there’s a firm precedent for it. Our Flag Means Death creator refers to the story of Mary Read as a direct inspiration for Jim. Read was an English pirate who constantly disguised herself as a man for myriad reasons: to get an inheritance, to join the military, and to become a pirate.

Our Flag Means Death takes the “probably” out of this issue by giving these characters the vocabulary we have today to explain who they really are. “Watching them try to process these things without having language for it is very interesting, and I think it allows me to hear it differently,” Jenkins says.

The historical precedence wasn’t anything new for Vico Ortiz, either.

“There [are] stories of people who found themselves in extraordinary situations throughout history that allowed them to find a way to explore and discover parts of who they are and to be accepted for those things,” they said.

Jim’s story wasn’t just a result of Vico’s authenticity in their process. Alongside them in this journey is their faithful confidante – and possible love interest – Oluwande, played by Samson Kayo. Best known for playing more boisterous characters in the British series Famalam and Bloods, Kayo found the depth of Oluwande’s relationship with Jim to be a welcome challenge.

“It was really fun for me to be partnered up with someone who has an amazing backstory and be able to learn and ask questions,” Kayo tells Inverse. “I remember I would ask Vico so many questions and be like, ‘Oh, that's such a stupid question.’ But they’d just be like, ‘Nah, bro, look, this is why we're here.’”

Ultimately, Our Flag Means Death prompts the audience to ask questions about their own perception of these characters and how they view figures from history. Piracy wasn’t just a safe space for queer people like Jim and Lucius but all people who felt like they couldn’t belong.

“Pirates were able to say a big screw you to literally all the politics and societal standards and expectations and say, ‘Bye, we're gonna do our own thing,’” Ortiz says.

This isn’t just about addressing underrepresented issues through the lens of piracy but portraying it in an authentic light.

“The more I look at this stuff the more I realize, piracy is not a heteronormative culture,” Jenkins says. For him, adding other perspectives and stories was just a matter of staying true to history in a way we haven’t seen before.

By taking historical inaccuracies to the plank, Our Flag Means Death is showing the world queer people have always been around – only now they’re equipped with the words that allow them to claim their stories.

Our Flag Means Death is now streaming on HBO Max.