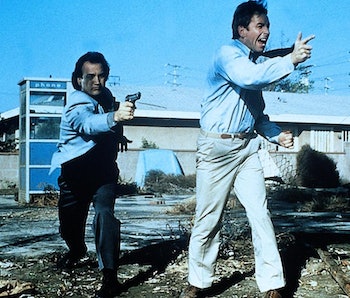 Unless you happened to grow up in the era when HBO’s schedule was less prestige TV and more the same dozen flop movies on constant rotation, chances are you’ve never heard of this movie. Reportedly still recovering from the financial mess of Heaven’s Gate, United Artists only released the 1987 sci-fi comedy in a couple of major cities, and most critics didn’t touch it with a bargepole. It grossed less than a million dollars.

Perhaps the studio believed audiences were suffering from mismatched duo fatigue. By the time it trickled into cinemas on September 25, the Hollywood machine had already given us Beverly Hills Cop II, Stakeout, and the arguable daddy of the genre, Lethal Weapon. Or maybe execs simply felt the world wasn’t ready for an offbeat Cold War satire starring the lesser Belushi sibling. Either way, the goof fest deserved to get more bums on seats.

Admittedly, Real Men’s premise sounds like it’s been cooked up by an overimaginative kindergartener: Following an accidental chemical spill that will wipe out civilization within five years, an alien life force comes to the rescue, but with a random caveat. They will help save mankind, but only if John Ritter’s bumbling insurance agent Bob Wilson provides them with a glass of water. However, both the CIA and KGB are more interested in their alternative offer – a “Big Gun” capable of speeding up the whole world-ending process.

It’s all utter nonsense, of course. Nevertheless, having previously penned Just One of the Guys, the extremely loose Twelfth Night adaptation about a gender-swapping aspiring journalist that also became a cable staple, first and last-time director Dennis Feldman knew his way around an unashamedly silly caper. Real Men is filled to the brim with farcical sight gags and goofy quips. Some blow tumbleweeds across the screen, but many raise a guilty chuckle.

You might be surprised to learn that James Belushi can take much of the credit for this 50/50 hit rate. So often the butt of the joke, the funnyman has suffered from comparisons with his cooler older brother John throughout his career. Yet his deadpan performance as Nick Pirandello, a wise-cracking government agent hired to facilitate the all-important water presentation, is pitch perfect. If Leslie Nielsen had turned down The Naked Gun, producers could have done a lot worse than look in Belushi’s direction.

After eight seasons on Three’s Company, we already knew Ritter could pull off the slapstick-prone nice guy in his sleep. And he doesn’t disappoint here, whether it’s engaging in a shootout using nothing but a pow-pow-pow finger gesture or, in the film’s most memorable scene, getting knocked out by a band of traitors inexplicably dressed as circus clowns. His constant bewilderment serves as a conduit for the audience, too.

Ritter also has to pull double duty, albeit briefly. He’s first seen as Pillbox, a CIA agent ruthlessly gunned down before the opening credits because of his close connection with the extra-terrestrials. It then becomes Nick’s job to track down his closest lookalike and train him to pass as the real thing. That’s easier said than done considering he’s a mild-mannered family man bullied by his teenage neighbors.

And Nick isn’t exactly the most reassuring tutor, whether it’s regularly planting the idea that Wilson’s wife is cheating on him with the milkman or offering vague, useless advice (“Don’t talk or breathe any more than you have to”). He also has an amusing penchant for lulling his reluctant protégé into a false sense of insecurity: “There’s no way out of here alive,” comes the answer after Bob asks for the bad news. His definition of good news? “It doesn’t look like we’re going to be here for long.”

Their entertaining yin-yang chemistry helps you overlook all the gaping plot holes and bizarrely muted responses to the unfolding chaos. Check out the nonchalance of Bob’s family the morning after their home has been obliterated by a shootout with reams of Soviet spies. And the world-saving meeting the whole film has been working toward? Blink and you’ll miss the entire no-expense-spent encounter with an alien who looks like they’re on their way to a Star Trek convention.

Still, the fact the movie isn’t particularly concerned about actual human behavior is part of its cheap and cheerful appeal. Real Men might have got lost among the titans of the late ‘80s buddy comedy. But rewatch Dude, Where’s My Car, Dumb and Dumber, and even Men in Black – the latter of which seems to have borrowed the National Enquirer-does-real-news joke – and you’ll see its DNA strands have spread farther than you’d think.

Real Men is streaming for free right now on Tubi.