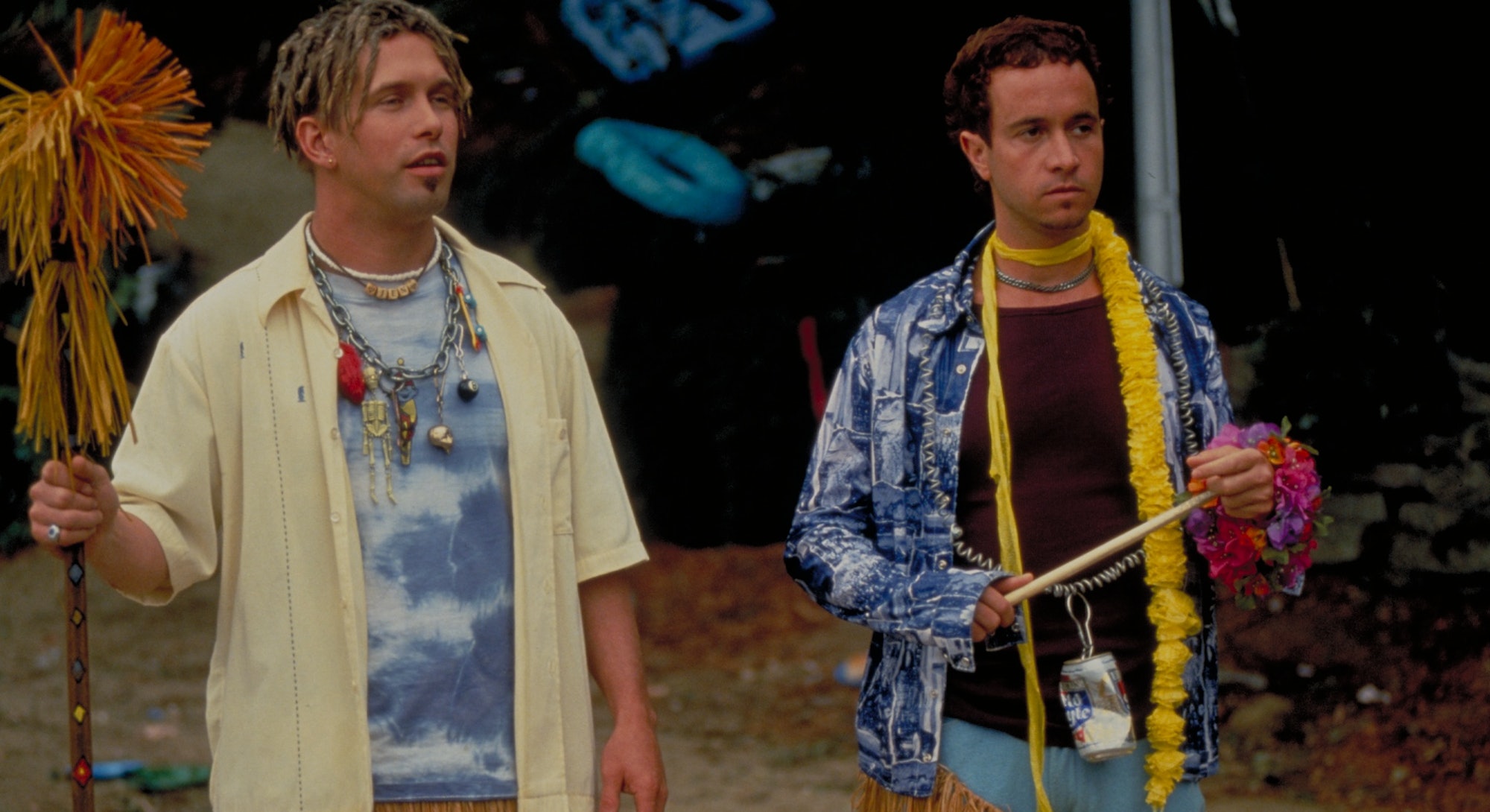 You wouldn’t expect convincing the lesser Baldwin brother to star alongside Pauly Shore in a puerile stoner comedy to be part of God’s great masterplan.

Still, according to Stephen, the flatulence gags, toenail chewing and questionable bedroom conduct of 1996’s Bio-Dome were all simply a ruse to help spread the gospel to America’s youth. The Lord sure does work in mysterious ways.

Unfortunately for its two stars, this divine intervention also had the side effect of ruining both their careers. Before signing up to play dreadlocked slacker Doyle Johnson, Baldwin was riding high on the success of the mid-‘90s coolest whodunnit, The Usual Suspects. His most notable film since has been The Flintstones in Viva Rock Vegas. Meanwhile, Shore’s "The Weasel" shtick was already wearing thin by the time he was cast as the equally braindead Bud Macintosh. Nevertheless, his Razzie-winning performance proved to be the final nail in the coffin and he never fronted a major comedy again.

Celebrating its 25th birthday this month, Bio-Dome also remains one of only ten films to achieve Metacritic’s dreaded 1 out of 100 rating, joining such illustrious fare as whitewashing FIFA biopic United Passions, tasteless rape-revenge horror Chaos, and Donald Trump propaganda Death of a Nation. But is its reputation as one of the worst films ever to grace a cinema screen truly deserved?

If you haven’t yet had the pleasure of watching Shore and Baldwin desperately trying to out-mug each other for 95 charmless minutes, the plot kicks off with the rather apt quest for a toilet stop. After mistaking a hermetically-sealed scientific lab for a shopping mall, the dim-witted pair inadvertently find themselves trapped in a year-long ecological experiment where they then test the patience of both the researchers and the audience in equal measure.

The dome in question was undoubtedly inspired by the real-life Biosphere 2, a man-made ecosystem in the Arizona desert designed to determine the viability of human survival on other planets. And as documented in last year’s hugely entertaining Spaceship Earth, this audacious 1991 enterprise proved that truth can be so much stranger than fiction.

Dangerously low oxygen levels, the near-extinction of its animal occupants, accusations of a cult mentality: the “biospherians” (aka, eight hippie volunteers with a penchant for theatrics) faced all kinds of compelling problems during their stint away from the rest of civilization. In contrast, Bud and Doyle get high on nitrous oxide, complain about soya, and break wind in an artificial rainfall generator. Jason Bloom, a novice director whose only previous effort had been the James Belushi short Irving, does so little with the concept that Bio-Dome might as well have been set in an actual shopping mall.

Of course, as Bud utters straight to camera himself, “Sometimes stupid can be pretty cool.” See the likes of Beavis and Butt-Head Do America and Dumb and Dumber, two similarly dunderheaded duo comedies also released either side of this box office flop. Though whereas those teenage boy favorites balanced their idiocy with a satirical edge or a sense of heart, Bio-Dome has nothing to offer but unconvincing pratfalls and tumbleweed one-liners. Oh, and some unashamed sexism, too.

Yes, this is a film in which Kylie Minogue, playing one of the world’s most brilliant oceanographers, does little more than suggestively suck on a carrot. Australia’s national treasure also has to throw herself at and briefly share a bed with Shore, the latter without her character’s consent in a highly problematic scene that’s played entirely for laughs. Little wonder that Minogue later described Bio-Dome as the low point of her career — and she appeared in Street Fighter.

Joey Lauren Adams and Teresa Hill also get short shrift as the two Earth Day enthusiasts inexplicably in long-term relationships with a duo who spend their downtime shaving dogs and playing smell the fart. Forget all those early Seth Rogen comedies, this is the peak of the schlubby manchild who gets the girl way out of his league trope.

Monique and Jen’s attitude to climate change is one of the few redeemable things about the whole sorry mess. In fact, an opening news montage of environmental disasters is a strangely powerful way to begin a bawdy vehicle for the man self-described as the “king of spring break.” Who knows whether Bio-Dome really did influence its pubescent audience to pick up a Bible but it could feasibly have influenced at least some to pick up their litter.

There’s also a fun game of spot the random cameo to be had, with Bill Clinton’s younger half-brother Roger, a then-unknown Tenacious D and even one of the world’s most famous kidnap victims, Patty Hearst, all making unlikely appearances. And it’s difficult to go wrong with an homage to “The Safety Dance.” Even so, as the credits roll to the ironic sound of uncontrollable laughter, the line previously uttered by Denise Dowse’s irked scientist still springs to mind: “It’s been a nonstop moronathon.”