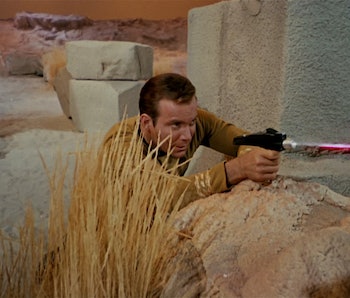 Captain Kirk is leaving his phaser on stun! In the first Star Trek: The Original Series episode to ever air — “The Man Trap” — the functionality of the famous Starfleet weapon, the phaser, is slightly different from what we see in the rest of the Trek franchise moving forward. As the world celebrates the 56th anniversary of Star Trek, let’s talk about the first zany appearance of the phaser.

Although “The Man Trap” was the fifth installment of the regular series in terms of episode order (or the fourth, if you don’t count the second pilot), it was selected by NBC to be the first episode aired. This means that, on September 8, 1966 (and September 6 in Canada!) the world’s first glimpse of Star Trek was a thrilling episode in which a salt-sucking-shape-shifting monster terrorizes the crew of the Starship Enterprise.

As an introductory episode to the entirety of the Trek pantheon, “The Man Trap” is both a perfect and terrible representation of what The Original Series is. While Star Trek isn’t really a monster-of-the-week series, the twist in “The Man Trap” encourages the audience to have some sympathy for this salt vampire, even if it does put its gross suckers on Kirk’s (William Shatner) face.

Much of Trek’s internal continuity was still in flux in the first season of the series, which explains why Spock (Leonard Nimoy) doesn’t bother using the Vulcan nerve pinch on Nancy Crater (Jeanne Bal); at that point, the Vulcan nerve pinch hadn’t been depicted on screen yet. (Though it had been filmed for “The Enemy Within.”) But, space monster smackdowns aside, detailed-oriented Trek fans might notice something else unique about “The Man Trap”: The way the famous Trek phasers are used. Here, they stun Professor Crater (Alfred Ryder) in a way that is different from the rest of the classic show and the whole franchise.

When Kirk and Spock set out to apprehend Professor Crater on the surface of the planet M-113, Kirk tells Spock to set his phaser on “one quarter,” while Kirk leaves his “on stun.” The idea that phasers have all sorts of different levels isn’t that weird. Throughout the franchise, the technology is revealed to have gradients of power, including different kinds of “stun.” But what is weird is what happens when Kirk actually uses his phaser on Crater.

At the moment Crater is hit by Kirk’s phaser shot, we hear a unique sound effect, which many have described as sounding like a ricochet. This sound effect was never again used when someone was stunned with a phaser in The Original Series, nor on any other Trek series or film. It’s pretty cool, but it’s unique to “The Man Trap.”

And if that wasn’t enough, when Kirk and Spock question Crater, right after the stunning, the voice of actor Alfred Ryder is slowed down to represent his post-stunned grogginess. As this deeper, slow-motion voice effect happens, he even stops himself and says, “Ooh! I feel strange.” And Kirk responds, “Just stunned. You'll be able to think in a minute.”

Although various complaints about the after-effects of being stunned have been referenced throughout the Star Trek canon by other characters, the ricochet in tandem with the slowed-down voice effect never happened again. In First Contact, Zefram Cochrane (James Cromwell) complains about a “hangover” from “your laser beam,” while in the Strange New Worlds episode “Spock Amok,” Number One (Rebecca Romijn) complains “Ow! that really stings.” But neither character speaks in slow motion.

In most of Trek canon, putting your phaser on “stun” effectively means putting your phaser on “tranquilize.” But, in “The Man Trap,” the stun setting actually means what it means. Crater is dazed and confused by the phaser, not rendered unconscious. For the most part, Star Trek never pivots back to this exact use of the phaser. Recently and notably, in Strange New Worlds, Number One and La’an (Christina Chong) have a brief phaser duel. Number One says to put the phasers on the “lowest setting,” which results in the phasers being set to “sting.” (Is there a “zing” setting?)

Although the exact in-universe effect of the phasers didn’t stick within the Star Trek canon, the nomenclature of giving a spacey weapon a non-lethal setting made a big impact. By the time the first Star Wars film dropped in 1977, sci-fi audiences were already primed to know what setting a weapon for “stun” meant. When those two stormtroopers decide they need to take Leia alive, they say “set for stun.”

Star Trek changed the face of science fiction and pop culture in ways that are perhaps innumerable. But, right at the very start, in the first episode that audiences saw, it also established a very specific and quirky way to diffuse conflicts.

The idea of setting a phaser on “stun” might seem like a nerdy reference; unpacking its functionality might seem like a way of getting way too in-the-weeds about Trekkie technology. But, within that narrative choice, the entire philosophy of Star Trek is made clear. Despite some of its more dated elements, one nice message of “The Man Trap” shines through, thanks to the phaser: there’s no need to mortally wound someone when you can just zap them instead.

The Star Trek franchise celebrates “Star Trek Day” on September 8 every year, which marks the first US airing of “The Man Trap.” You can watch that episode on Paramount+.