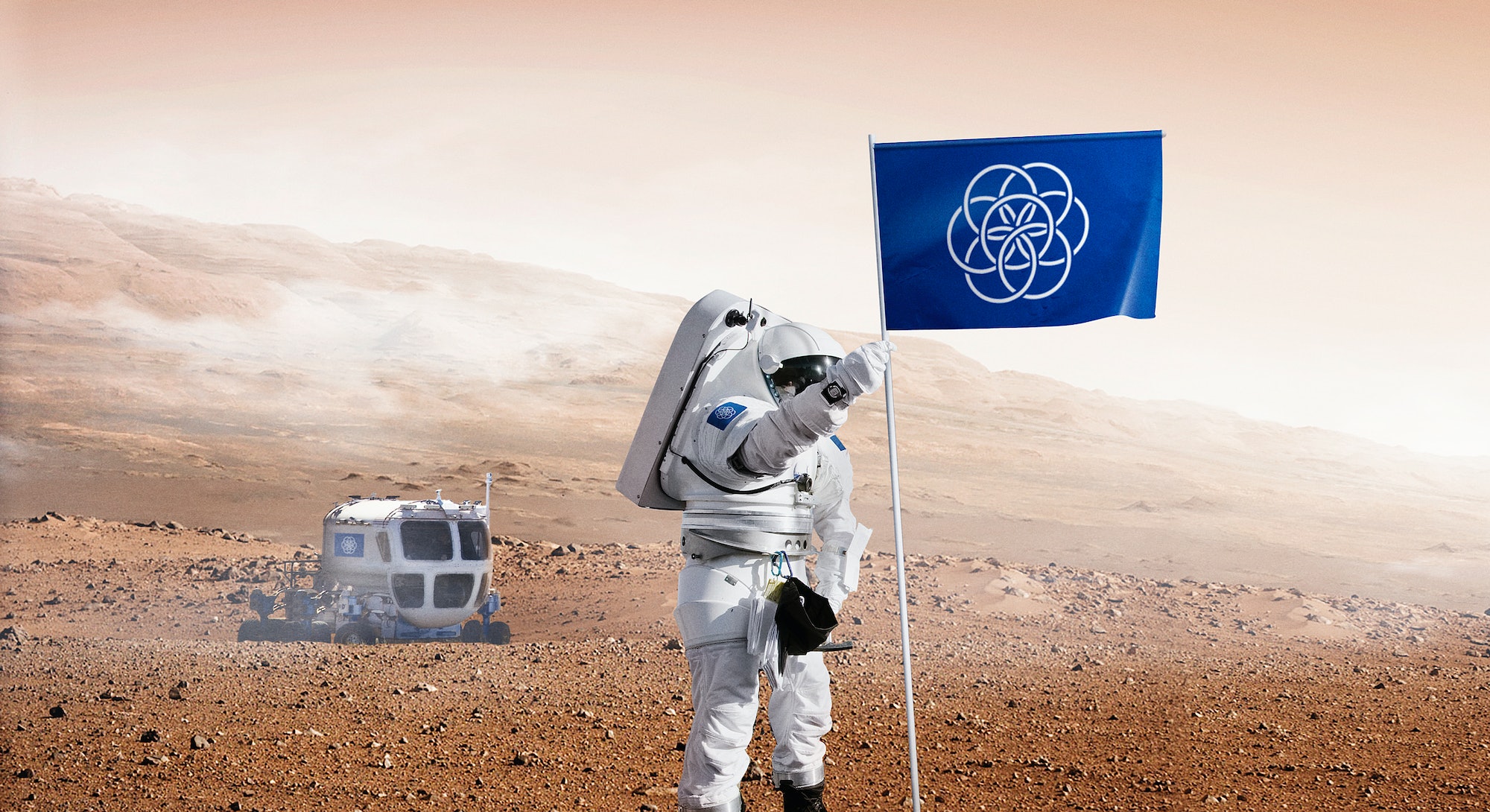 When Neil Armstrong set foot on the Moon on July 21, 1969, I wasn’t even born. I’ve heard stories about how the world held its breath — a long, excruciating inhale — while they watched on TV as the Eagle lunar lander slowly approached our nearest neighbor’s rocky surface.

When history’s most iconic footprint was made, all of Earth cheered. But it was an American flag that we left behind. As we look to putting humans back on the Moon and perhaps Mars, we need to broaden our perspective of what we are representing. We need an Earth Flag.

I understand why the U.S. flag is on the Moon. American tax dollars funded the mission, and the flag was a potent message in the ongoing Cold War. Flags play a role in the way humans view one another. But they also play a part in how we view the planet.

How to Save the Earth: On Earth Day 2022, Inverse explores some of the most ambitious, exciting, and controversial efforts to save our planet.

In 2015, I designed a flag for Earth. The proposal was part of my graduation project at Beckmans College of Design in Stockholm, Sweden. After months of diving deep into my passion, vexillology (the study of flags), I posted the flag online.

Pressing enter on my keyboard that day completely changed my life. Global news channels did stories on my work, and my website got more than 450,000 hits in its first 24 hours. The initiative has since grown into a nonprofit organization with volunteers around the globe. But the world is also a very different place today than seven years ago.

Now, space companies send paying customers into orbit for days at a time. This month, the International Space Station hosted four commercial crew members as part of Axiom-1. We are approaching the point when humans make the leap off Earth and onto the surfaces of other planets. When we get there, how will we represent ourselves?

A planetary flag for an interplanetary people

The International Flag of Planet Earth represents the territory “Planet Earth.” Since humans first invented flags, they have served as graphic symbols to categorize entities. For instance, cities, municipalities, states, institutions, and nations have flags. Today, in the post-Cold War era, no nation can legally claim ownership of outer space. This fact, coupled with the hierarchy of our planet’s flag system, begs the question: Why not adopt a planet-wide flag to fly in space?

This argument is logical, but it will also push the shift in perspective we need to face up to severe global challenges on Earth. In 1994, the astronomer Carl Sagan highlighted this profound emotional impact in his famous speech on the photo “Pale Blue Dot”:

This photo, taken by the Voyager craft in 1990, displays a tiny blue dot called Earth, floating in a vast space — this speck is all we’ve ever known.

Since human-crewed spaceflight became a reality in the sixties, space travelers have reported experiencing a cognitive shift after their time above the Earth. In orbit, national borders are no longer apparent, and it becomes clear that all of us back on planet Earth are in this together. Named the Overview Effect, it is, in short, a revelation experienced when seeing Earth from afar.

Sadly, this experience is only ever had by a select few. More people might experience this shift in perspective on the ground if they had a clear symbol of Earth as a planetary body. I believe a Planet Earth flag could play an essential part in this change. I firmly believe that every time someone sees this flag, they will know that they are a part of something greater than themselves. As humans, we share the challenges and possibilities of our home planet. We also share the responsibility to sustain this planet so that it can sustain us and all other life here.

Although it may be easiest to grasp why a flag for planet Earth plays a role in the arena of space, a flag like this also has the potential to create social, cultural, and environmental ripple effects for us back on Earth.

How to make the Earth Flag our planet’s symbol

It’s pretty easy to establish the Planet Earth Flag; we have to use it. Some people already use it: The flag appeared in the award-winning 2019 video game Observation: In the game, the flag is placed around a space station setting.

Exposure is vital for many reasons. It gives people a swift reminder that we share this planet. It also reinforces the flag’s position in its journey toward becoming the official flag of our world.

Another organization using the flag now is The Observatory of Economic Complexity, part of the MIT Media Lab. They use the flag to visualize global economic data. We hope to inspire people to use the flag in many ways. Together, we can create a snowball effect and establish an Earth identity.

People's support for the flag needs to grow organically for it to reach an official status as the flag of Earth. Think about the Pride Flag: Once upon a time, in 1978, artist Gilbert Baker designed a Rainbow Flag, and it flew at a Pride parade. Today, the Rainbow Flag is a rallying symbol of a diverse LGBTQ+ community throughout the world. It is an emblem of a coherent, collective identity. That transformation took time and commitment.

Flags and identity go hand in hand. The International Flag of Planet Earth is not intended to exclude national flags. In our current times, transnationalism is often part of our modern sense of identity. The global community can — in some ways — make us feel less connected since it is harder to perceive. But if harnessed, it has the potential to provide a different perspective, a broader sense of connection, and global solidarity. There is incredible power in the sense of belonging.

As diverse people of Earth, we have to acknowledge the fact that we have many things in common. As we are entering an era of tremendous new leaps within space exploration, we have an opportunity to rally behind a flag that symbolizes what we share. May the flag remind us of the beautiful planet we call home and how interconnected all life really is.

How to Save the Earth: On Earth Day 2022, Inverse explores some of the most ambitious, exciting, and controversial efforts to save our planet.