“I always wanted to be in the movies” 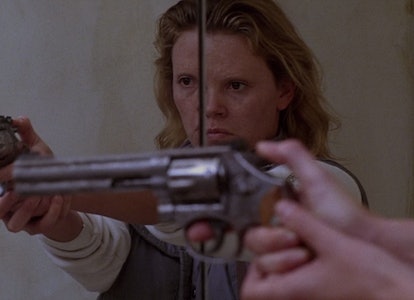 Movies based on real-life events always have that extra layer of believability. Sure, Zodiac makes for a thrilling watch, but it’s even scarier because you really know there was a Zodiac Killer. The Bling Ring is a tale of entitled kids getting away with grand theft, but it’s especially shocking knowing they’re based on real-life entitled teens. But unlike these stories, which were famous before they got the silver screen treatment, this 2003 movie catapulted a little-known serial killer into the spotlight and gained an astounding amount of acclaim.

Monster was written and directed by Petty Jenkins, the mind that brought Wonder Woman and (hopefully) Rogue Squadron to fruition. In her ambitious debut feature, Jenkins tells the story of Aileen Wuornos, a real-life serial killer with a background of abuse and self-destruction.

Charlize Theron, hailed as one of the most beautiful actresses in Hollywood, plays very against type. As Aileen she swaps out her South African lilt for a deep Southern accent, and her wild hair and nearly invisible eyebrows make her look like a completely different person than she was in The Italian Job just a few months earlier.

The movie follows Aileen as she meets a young woman named Selby (Christina Ricci), a fictionalized version of Wuornos’ real-life girlfriend. Ricci proves an equal match for Theron’s commitment, providing teenage rebellion and a doe-eyed wonderment in the face of Aileen’s disillusionment and mania. Selby is naïve, but she knows it. She also knows that Aileen protects her in a way she hasn’t experienced before. Ricci hits every emotional beat Theron delivers back at her in intense, visceral scenes.

Selby and Aileen run away from Selby’s judgmental family, with Aileen working as a prostitute to help them get by. When a john turn vicious, so does she. At first, Aileen dismisses her crimes as justified. What’s a little robbery when you don’t have any other options? Then the robbery turns to murder, and soon a killing spree, each death a little harder to justify. Aileen realizes she’s slowly morphing into someone she doesn’t even recognize.

Aileen Wuornos was executed by lethal injection in 2002, and the entire movie feels like a plea to consider the humanity of those America considers worthy of death. Aileen is a killer, but she’s also a victim of rape, abuse, and a lack of mental health resources. While her descent may make for a gripping story, it also raises the question of whether it could have been avoided if she’d received help.

Aileen Wuornos’ story is a cautionary tale, but the lesson can depend on the viewer. It could be construed as an anti-death penalty story, or a case for not glamorizing true crime on film. Instead, if shows crime for what it so often is: Disadvantaged people, often mentally ill, trying to survive and screwing up in the process.

Theron’s acting ability exudes from every shot through her masterful use of eye contact and body language. There’s a reason Roger Ebert called it “one of the greatest performances in cinematic history.” She nails the nuance between hero and villain, sympathetic yet completely alien.

Monster is more than just a true crime thriller. It’s a character study, an acting gauntlet, a passionate cry for human rights and the need to see the human in even the most damaged people. Every award this movie won was hard-earned, and it’s still completely captivating almost 20 years later.

Monster is streaming on Netflix.

More like this
Culture
Feb. 1, 2023
Long Before The Fabelmans, Spielberg’s Catch Me if You Can was Being Misinterpreted as Sentimental
By Eric Francisco
Culture
Jan. 31, 2023
Final Destination 2 Perfected the Art of the Gross-Out Kill
By Jon O'Brien
Culture
Feb. 4, 2023
A Failed Sci-Fi Sequel Stunt Accidentally Set the Standard for the Forgettable Netflix Movie
By Hoai-Tran Bui
LEARN SOMETHING NEW EVERY DAY.
Related Tags
Share: