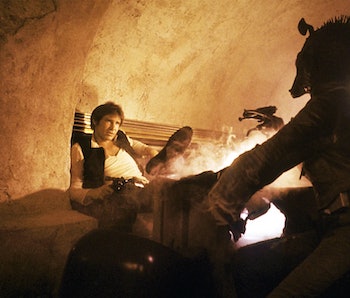 Han shot Greedo. Whether or not Han Solo shot Greedo in self-defense, or whether he didn’t isn’t really the point. The point is that Han Solo casually and coldly murdered Greedo. Now, it turns out, blasting first and asking questions later is as common in the Star Wars canon as double-crossing your allies.

In Andor episode 6, two specific plot details prove that backstabbing and murder don’t just happen every once in a while, they’re common occurrences. Here’s why the actions of Skeen and Cassian in Andor could indicate that Han Solo was a much worse person than we’ve ever imagined.

Spoilers ahead for Andor Episode 6.

Without a doubt, the best twist in Andor Episode 6, “The Eye,” comes toward the very end. After the heist succeeds (with a few major hitches), the remaining crew brings Nemik (Alex Lawther) to a rebellion-supporting doctor. While young Nemik lies on his deathbed, Skeen (Ebon Moss-Bachrach) hits up Cassian with a proposition: let’s rip off all this stolen Rebellion money for ourselves. In response, Cassian coldly shoots Skeen point blank.

While it's unclear if Skeen was playing a long-con here or just saw an opportunity and went for it, what is clear is that both Skeen and Cassian are shady as hell. Moments later, Cassian walks into the tent, waves his gun around, and demands to buy the doctor’s ship. He’s taking his cut of the money and leaving. He barely even registers Nemik’s dead body.

It’s all pretty dark stuff. Granted, Cassian comes off looking better than Skeen, but not by that much.

Analogously, this would be like if Han Solo had murdered Lando on Cloud City before Lando had a chance to betray him. And because Han’s biography is spotty in between Solo and A New Hope, there’s a good bet Han and Chewie did just as many questionable things as Skeen and Cassian back in their scoundrel heyday. Based on the way people behave in Andor, it’s not nuts to think that in the exact same timeframe as Andor (5 BBY), Han and Chewie are also out there murdering a ton of people in cold blood. In fact, it’s likely.

We tend to think of Han Solo and Chewbacca as heroes. In fact, even in Solo, Qi’ra pushes back against Han’s anti-hero bravado saying, “You’re the good guy.” While this is all a bit meta, it’s probably not actually true day-to-day. Han Solo’s literal killer instinct also allowed him to kill his mentor, Beckett (Woody Harrelson) around 10 BBY. Five years after that, it feels very likely that Solo’s kill count has only increased. There’s no reason to believe that Han’s ethics are any clearer than Cassian’s. They could be as worse as Skeen’s.

If we overlay the conversation between Skeen and Cassian, with the brief exchange between Chewie and Han in A New Hope, the broad strokes aren’t that different. Like Han, Cassian is being paid for a job, and now that he’s got his reward, he’s leaving. Skeen, in a sense, represents the extreme side of Han Solo’s personality in A New Hope, insofar as Han is leaning toward the amoral path of taking the money and never looking back.

The stakes are similar too. In Andor, a naive, relatively innocent young person, Nemik dies, for almost no reason. In A New Hope, Luke, another naive young person would have died had Han and Chewie not come back.

So, in Cassian and Skeen’s situation, it’s all the same, but kind of reversed. The innocent young person is already dying and the ideals of the Rebellion are way too vague to override a self-perseveration-centric code of ethics. Basically, they’re both Han, and there's no Chewie. (Extended Star Wars canon tells us it was Chewbacca who convince Han to go back to the Death Star.)

If you have a starship full of credits, most people in Star Wars, as in real life, will take the money and run. We know that Cassian will eventually turn his ship around and get formally involved with the Rebel Alliance. You could argue his eventual role is much more official than Han’s ever will become.

If we just add up all the questionable things that Cassian has done in Andor alone, it will seem like he’s a way worse person than Han. But the truth is, that’s only because Han is off-screen right now. If we could see what Han is doing during the events of Andor, there’s a good chance he wouldn’t seem like a good guy at all.

Andor is streaming now on Disney+