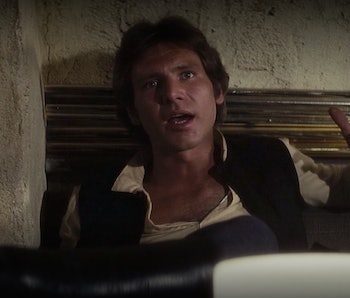 There’s a disturbance in the force, and it’s on Disney+. Today, on the launch day of Disney’s big streaming platform, Star Wars fans awoke to discover that the platform has yet another new version of 1977’s Star Wars: A New Hope. Once again, there have been edits to the infamous Han/Greedo scene.

As of now, Disney+ is available worldwide with decades of pop culture history on demand. From the Guy Williams vehicle The Sign of Zorro (the original movie superhero!) to the Disney Renaissance of the ‘80s and ‘90s, Disney+ is a treasure trove of nostalgia and brand identity. And yes, every Star Wars movie is streaming, plus the new live-action series The Mandalorian.

But A New Hope, the movie that started the Skywalker Saga, has been subject to numerous edits in the 42 years since its release. Director George Lucas has infamously edited his movie to add CGI aliens and other tweaks, many times to the dismay of fans. The 2010 documentary The People vs. George Lucas chronicles Lucas’ contentious relationship to the ravenous fans Star Wars.

One notorious edit involves the first appearance of the scruffy nerf herder, Han Solo. Shortly after Han agrees to transport Luke, Obi-Wan, and the droids, the bounty hunter Greedo tries to apprehend Han to Jabba the Hutt.

In the original 1977 film released in theaters, Han shoots Greedo under the table — perfectly illustrating the roguish, chaotic neutral alignment of Han and the lawless galaxy that exists under the brutal Empire’s boot.

But in the 1997 rerelease, a weird edit was made that showed Greedo shooting first, not Han. Han’s firing became a reaction to Greedo, and not the smart, pre-emptive move by an experienced smuggler. In 2004, when the original Star Wars trilogy was released on DVD, the set included another edit of the scene, this time with Han and Greedo shooting at nearly the same time. This scene was edited tighter in 2011, when the films were released on Blu-ray.

That brings us to 2019 on Disney+, which makes the biggest edit to the scene in years. This time, after Han delivers his iconic line (“Yes, I’ll be you have”) the scene now cuts to a close-up of Greedo saying something untranslatable, presumably an insult, before the two fire one more time.

Once again, Han and Greedo shoot nearly at the same time, but play it slowly frame by frame and it looks like Greedo still shoots first. It’s weird!

One enterprising Twitter user, Garrett McDowell (@GarrettMcDowell1) made an edit that helpfully shows the difference between all versions of the scene in a single video. Lower the volume on your headphones and check it out here.

The edit has predictably drawn the ire of Star Wars fans, who are venting some frustration on Twitter. Unlike in 1997 or 2004, this time fans seem more exhausted than outraged by the idea of yet another edit. Because in retrospect, this Han/Greedo thing doesn’t seem like a big deal compared to today’s Star Wars fan discourse. Remember when this was the only thing fans got angry about? You almost miss it.