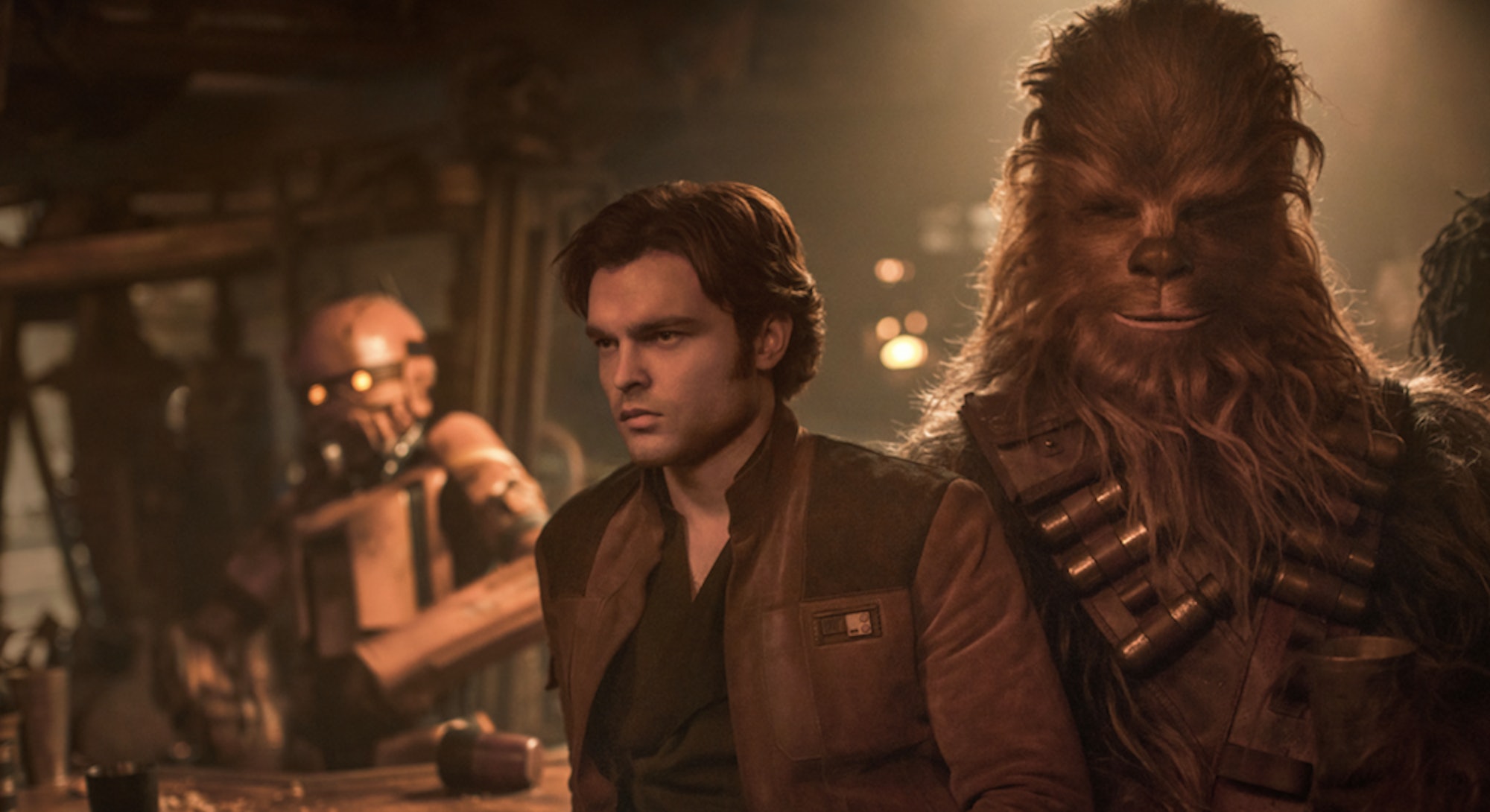 The last time we saw Han Solo in a Star Wars movie, it was depressing.

Sure, those sad Force Awakens feelings were mostly connected to Han’s grim fate, but it’s also weird that the hottest dude in the last few of these movies has been the bad guy, Kylo Ren. In Solo, the heroes are hot again, but no one talks about the Force or stops to meditate on the meaning of existence.

We’re on the fourth new Star Wars movie since 2015, and of those four, only in Solo do characters kiss each other. This fact makes a modicum of sense since Han Solo has always embodied the bawdier side of the Force.

“Luke [Skywalker] represents chastity and virtue, while Han Solo represents cock,” essayist Ashley Cardiff so aptly noted in her 2013 book, Night Terrors. But, if Star Wars used to rely too much on Han for sex appeal, that’s not the case anymore.

Although Alden Ehrenreich’s swagger and wit are charming as hell, he’s closer to being the virtuous Luke Skywalker character in this story, which means Donald Glover’s Lando Calrissian and Phoebe Waller-Bridge’s new droid character L3-37 are actually the sexiest characters in the movie. Yes, there’s a lot of flirting that is played for laughs between these two, but you’ll be shocked by how much you believe in the relationship between Lando and his robot co-pilot.

Han Solo and Qi’ra (Emilia Clarke) are great as double-crossing, star-crossed lovers, but Lando and L3 are the ones bringing the fire. This is to say nothing of the fact that — as glimpsed in the trailers — Lando also flirts a little bit with Han, too.

Remember Han and Leia’s famous exchange in the carbonite chamber in The Empire Strikes Back? Let’s just say Solo contains a tiny tip-of-hat to that moment in a way you won’t see coming, and you might miss it if you’re not listening closely.

When you’re not laughing at the rapid-fire one-liners, you might be surprised a few times. There are a few huge cameos, and none of them are exactly what you’d expect. Considering everything that Ron Howard, Lawrence and Jon Kasdan could have crammed into this movie, the end product feels surprisingly minimalist.

If you’ve followed the behind-the-scenes drama in which Chris Miller and Phil Lord were relieved of their directorial duties and replaced by Howard at the last second, you might be wondering if any of that is apparent. The short answer: not really. Because this is an exciting and totally generous summer movie for a general audience, none of that matters.

Unlike more recent Star Wars flicks, Solo doesn’t really require you to know anything about Star Wars before watching it. It’s basically what Valerian should have been — except with Solo, you actually believe all these people are real and that they have sexual chemistry with each other.

All of this means that as a Star Wars movie, it may fall a little short for some people. But, if we’re grading the film, ranking it against other Star Wars movies is the wrong criterion. Solo is a smaller, more action-adventure oriented film. Comparing Solo to A New Hope or even The Force Awakens isn’t fair. Those are epics.

This is different. It’s smaller and feels like just one installment in the chronicles of Han Solo, Lando Calrissian, and Chewbacca. (And, yes, a sequel, or four, are set up in several obvious ways.)

Thinking of Solo against an Indiana Jones film is probably the best way to measure its quality. And Solo is way better than Kingdom of the Crystal Skull, gives Temple of Doom a run for its money, and might be just as good as Last Crusade.

If you leave the theater whistling the John Williams Indiana Jones march, I wouldn’t be surprised.

Solo: A Star Wars Story is out everywhere on May 25.

You might enjoy this Inverse original: “We’ve Never Seen Paper In Star Wars, Until Now.”