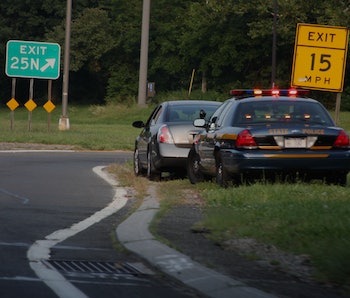 The ugly truth is that in America, you can’t always trust police officers to follow the laws they’re tasked with enforcing. Solomon’s Shield, an app released in the Apple store on Tuesday, provides an extra layer of accountability for police officers when their body cameras aren’t recording for, oh, whatever reason.

First, you grant the app permission to use your camera and microphone, access your location and contacts, and connect it to your Facebook account through another app called Village Keepers.

From there, with a tap of the screen, you can live stream an encounter with the police on Facebook, as well as alert a select list of contacts of your whereabouts and the situation.

The app is divided into two sections: the “Encounter” section, for active police encounters, and “My Rights,” a section that deals with the legal side of civilian/cop interactions. “Encounter” features a comprehensive guide for run-ins with the police in four different locations: in the car, in the home, in the community, and with other citizens. Selecting a locale will take you to a series of tips, each of which can be expanded on with another click.

“My Rights” features an index of scenarios and a list of your rights in each of them — whether an officer pulls you over for a traffic stop, arrives at your home, or stops you on the street.

There is also a dictionary of phrases associated with police searches, like “probable cause” and the “plain view doctrine.”

According to the app developer’s nephew, the man behind the app is an attorney.

Unfortunately, information is not always enough to protect American citizens from their police force, especially if those citizens are black. African Americans are three times as likely to be killed by police officers, according to a dataset compiled by Mapping Police Violence, and 160 black people have been killed by police officers in 2017 alone.

And sometimes even a Facebook live stream isn’t enough to stop police violence, as shown in the case of Philando Castile.

But, at the very least, this app seems like a practical addition to anyone’s smartphone, and a step towards a more informed, safer population. It is currently available to download for free.

More like this
Culture
Jan. 14, 2023
2,454 years ago, one eerily familiar event led to the downfall of Ancient Athens
By Rachel Hadas and The Conversation
Gear
Jan. 26, 2023
How to use Apple’s Freeform app to become a planning pro
By Alyson Velati
Gear
Jan. 24, 2023
Arc browser for iPhone is bringing skeuomorphism back (kind of)
By Raymond Wong
LEARN SOMETHING NEW EVERY DAY.
Related Tags
Share: