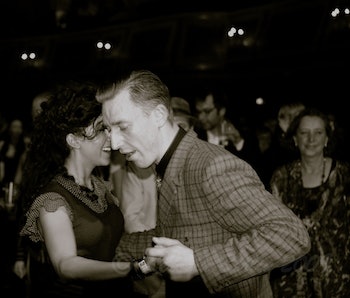 When New Year’s Eve rolls through you’ll be drunk, disappointed, and, in all likelihood, tired as well. That’s not just because a midnight drop means staying out past your bedtime. It’s because drinking and staying awake — two things often done in tandem — don’t actually mix well. Alcohol does a lot of fun stuff to the human body, but first and foremost it slows it down. Drinking makes us tired and, when we’re up late, less fun.

While the majority of people develop a degree of tolerance to the sleep-inducing effects of booze — this is why bars have stools, not beds — that doesn’t mean that you’re immune from the effects or that they won’t linger. Consuming a drink in the few hours before bed ensures bad sleep: It, almost paradoxically, increases wakefulness in stage one of sleep periods. And because alcohol increases the stress hormone epinephrine, the body feels stimulated and your heart rate increases to the detriment of dreams.

And, no, sobering up doesn’t ensure better sleep. The side effect of the body metabolizing and eliminating booze from the body? More sleep disruption. Oh, and you’ll pee a lot.

If you go to bed drunk and wake up hungover, it’s also likely that the hair of the dog will slow your roll. Mid-afternoon drinks can be especially wearying — if you’re not well rested, it’s thought that even one drink can do you in. The good news for day drinkers, however, is despite the studies that say increased sleepiness compounds the effects of alcohol, how miserable you feel is largely a mental game. A study of day drinkers from the 1980’s found that “participants who preferred alcohol…generally experienced alcohol as increasing their elation and vigor, whereas participants who did not prefer alcohol generally experienced alcohol as increasing their sleepiness.”

So how does one fight the dozy side of booze? Studies have shown that chronic drinking causes the brain to increase its metabolism of acetate, favoring the negative ion as a means of energy instead of glucose. In other words, drinking a lot a lot of the time might solve the problem (it also might not, studies haven’t settled the matter), but not over the near term. And that vodka Red Bull isn’t necessarily a solution. Energy drink cocktails can help sustain party-ness for up to six hours, but there are issues with the approach. Energy drinks convince your brain that drinking more is okay, even when it’s metabolically unwise, and puts you at a greater risk of making a bad decision due to over-confidence.

The best approach: Drink for a while then stop drinking. The key isn’t to stay sober or attempt to “sober up,” which is a fairly useless exercise. The idea is to enjoy the enjoyable side effects of alcohol without succumbing to the less pleasant ones and screwing up the first day of the new year. This is why switching to coffee at midnight works. It’s a diarrhetic so you get to have a clean slate. Literally.

More like this
Innovation
8.12.2022 9:30 AM
Indoor lights make us sick — this technology could fix that
By Miriam Fauzia
Science
8.5.2022 1:00 PM
The most miraculous sci-fi movie on Netflix reveals a scientific debate over aging
By Tara Yarlagadda
Science
12 hours ago
'Gifted' dogs may share this one personality trait. Does your dog have it?
By Tara Yarlagadda
Related Tags
Share: