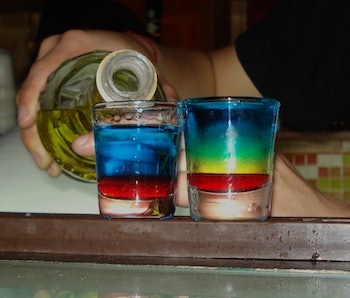 Most people think of alcohol to be fairly benign if consumed in moderation — even beneficial — but new research is challenging that perception.

Drinking even a moderate amount of booze just a few times a month can damage the visual systems of young adult brains, according to a study published in PLoS ONE.

The researchers tested the color perception of 24 young people ages 18-29 who drank between two and 12 times per month. The experiment was performed at least two days after the most recent drinking session. Compared with a control group, the drinkers did worse at distinguishing different hues.

“Adolescence and young adult age are periods of important neurological development and alcohol exposure during this period of life might be responsible for deficits in visual functions, especially color vision that is very sensitive to neurotoxicants,” the Brazilian scientists write.

It’s pretty scary to think that a few beers on a Saturday could cause measurable brain damage, so maybe take these findings with a tequila glass rimmed with salt.

If your young-adult brain has soaked up more than its share of booze, you might be interested in running through various color [perception tests]((http://colorvisiontesting.com/ishihara.htm) available online.

This test is based on the Farnsworth-Munsell 100 Hue Color Vision Test, one of the tests the researchers used in their experiments. See how you score.

More like this
Science
Sep. 23, 2022
Three everyday beverages that may taste worse because of climate change
By Tara Yarlagadda
Science
20 hours ago
Astronomers just found the remains of one of the universe's first stars
By Kiona Smith
Science
11 hours ago
Look: Hubble and Webb Telescopes joined forces to image NASA's asteroid hit
By Kiona Smith
Related Tags
Share: