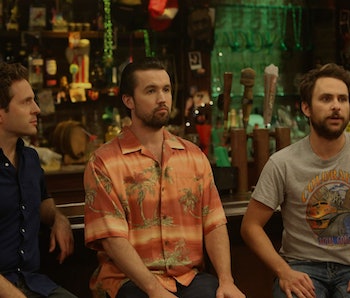 We learned a lot about alcohol this year, from why it makes you hiccup to how your personal background affects the type of booze you prefer. We also watched a lot of drinking on television. Some characters drank beer socially (the Gang on It’s Always Sunny), some had a personal routine (Olivia Pope’s iconic glass of red wine), and some drank to cope with mental illness (Jessica Jones and You’re the Worst’s Gretchen).

Mad Men came to a close this year, ending one of the most booze-addled dramas in television history. The ad executives drank hard liquor in the office, especially in earlier seasons, and the housewives were often shown sharing cocktails and cigarettes while their children played in the other room.

In earlier seasons, Don Draper was ranked as the heaviest drinker on the show, and he gave being sober a shot in season 7. Our last shot of Don, during a morning meditation, suggests he may have found balance in his life, so he may not be stealing bottles of vodka from friends in the future. Don’s inner peace might have something to do with Jon Hamm’s time in rehab, which reportedly happened just before the last season began filming.

No one really calls out Olivia Pope for drinking habitually, but any therapist would tell her she uses her nightly red wine and bowl of popcorn as a way to cope with her extremely stressful lifestyle.

We rarely see Olivia intoxicated, but she is extremely consistent with her alcohol intake. Her glasses get comically larger and larger as each season goes on, and in some cases, when she’s kidnapped or one of her insane parents appears again, she forgoes a glass altogether. Drinking that often also explains, in part, why Olivia only ever wears taupe and white clothing.

Linda Belcher, another TV woman who sticks almost exclusively with wine (although in the Belcher house, it’s of the boxed variety), drinks as comedic relief. She’s pictured as drinking for drinking’s sake, and still manages to be a very supportive mother and wife.

Rick Sanchez, of Rick and Morty, is constantly drinking out of a flask he keeps in his lab coat, and his belching and word-slurring is typically just portrayed as funny. In Season 2, we saw Rick encounter an ex-girlfriend, and after they split again, he drank the remainder of his personal flask and an unnamed substance in an erlenmeyer flask before trying (unsuccessfully) to kill himself in one of the darkest moments of the season.

The titular hero in Netflix’s Jessica Jones drank a lot of whiskey, and even referenced the liquor as her way of coping with the superhero lifestyle in the show’s promotional videos. Buzzfeed compiled a list of all the different types of cheap whiskey and vodka Jessica drank, even including a fake brand that referenced an old Iron Man comic.

Everybody on You’re the Worst drank whenever possible, fueling one of the most surprising and powerful second seasons of television, ever.

The characters on You’re the Worst, unlike Olivia Pope or Jessica Jones, cared more about getting completely hammered than selecting a particular type of liquor. The show spoke to the need to obliterate oneself, as opposed to the desire to liven up a party or grease the wheels of social interaction. Booze on You’re the Worst has a constant, loud presence, informing the characters’ search for an escape.

Not surprising for a show set in a bar, It’s Always Sunny in Philadelphia often involved shots of alcohol consumption, though most of the time the Gang was simply arguing over a few beers. The characters are no strangers to being sloshed, but it’s rare to see any of them drunk enough that it interrupts the show’s action. Beer is simply part of the backdrop on It’s Always Sunny, and it always has been.

When television featured alcohol this year, it tended to go full-force into portraying characters who are dependent on alcohol to manage their emotions. A couple new shows in 2015, including The Unbreakable Kimmy Schmidt, featured alcohol as a rite-of-passage toward adulthood, but the image of booze as a benign thing wasn’t popular. If a character drank on TV this year, chances are they were doing it heavily.