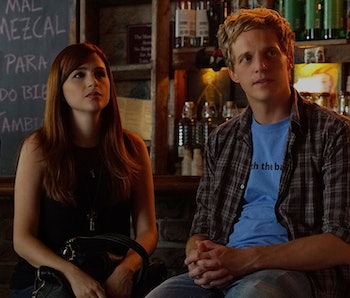 Rowan Kaiser: Before last night, I was ready to argue that FX’s You’re the Worst was having one of the best sitcom seasons in years. After a delightfully nasty first season about two disdainful people hooking up at a wedding — he’s telling the bride that it’ll never last, she’s stealing a blender — the second season has made it more consistent, and much funnier. But most of all, You’re the Worst has found an incredibly strong overarching hook: the depression of one of its leads, Gretchen, played by the utterly marvelous Aya Cash.

The combination of rigid sitcom form, superb acting, and a shockingly real treatment of a common mental illness has made the last few episodes fantastic, with the threat of imminent collapse — both of the show’s characters and the show itself for being too daring — adding a delightful spice to the proceedings.

Then they aired “LCD Soundsystem” and suddenly it’s not even a sitcom anymore and I’m not even sure how to react. Brock, what is even happening?

Brock Wilbur: They are trying to break your heart. And succeeding.

Season 1 did a brilliant job at bringing two oppositely charged magnets (Gretchen and Jimmy, played by Chris Greene) into alignment, and now we’re watching the natural push-back against consistency, normality, and the refusal to settle in the uncalm brain. The bigger arc about depression has taken some time to play out, and in that time the show has started filling with more stories based on its secondary characters, including Lindsay’s (Kether Donohue) inability to regain control of her life post-divorce and PTSD-suffering Edgar’s (Desmin Borges) attempts to re-invent as an up-and-coming improv performer carving out a serious relationship with his former teacher. A lot of the second season has been at its best when letting other characters take the lead, while our leads’ suffering takes a casual backseat.

This reaches an apex in last night’s episode, which is focused on a set of characters completely outside the purview of the show. Rob (Justin Kirk) and Lexi (Tara Summers) are a similarly-aged couple who live down the street from the show’s leads, and are raising a child and a dog in an aging-cool fashion — they’ve still got a healthy sex life, they still hit up cool events, and they still casually get high, even if it just makes them sleepy these days. It’s a setup for showing a functional, happy relationship that can endure the years and perhaps even be improved by time, born of a drunken bathroom hook-up at a rock venue. It’s exactly the kind of hope that our leads need to see, if they want to realize their relationship’s potential.

BW: But we take our time getting there! A couple of scenes take alternate views, where we can see this happy new couple and then watch them again from the perspective of Gretchen beginning to stalk them. And while that should’ve been worse, it actually builds the hope on thicker, because we haven’t seen Gretchen take an active interest in any part of her life for most of the season. So even when she’s stealing babies and feeding nachos to dogs, it’s actually this blinding light at the end of the tunnel.

RK: I think this is fascinating because I wasn’t hopeful at all. This, to me, did not seem to be a depressed person taking an active interest in something, anything. This looked like a depressed person about to go over the edge into dangerous behavior. Gretchen is so desperate for any way to get out, she considers being normal. And that consideration leads to near-kidnapping!

But let’s take a step back and talk about the formal considerations that make these multiple interpretations possible. Every prior episode of You’re the Worst, with the slight exception of a Season 1 flashback episode, has been a pretty conventional sitcom episode in form. Our characters have an idea or get some news, they deal with that, it’s hilarious and probably also sad, and then there’s a resolution. This show is tight.

Then suddenly “LCD Soundsystem” appears and it’s entirely different. It’s shown almost entirely as a Lexi-and-Rob episode (two characters we’ve never seen before). We’re shown life through their subjective eyes. Gretchen and Jimmy are the objects, the cool kids, who never quite made it to living authentic/normal lives (an argument made explicit both in this episode and in the Season 1 finale). And Gretchen buys into this so hard that she steals it, or at least tries it on for size without asking.

BW There’s something even dismissive of the form in the way that the episode title works too. You drop the name of LCD and then it’s played for this completely throw-away line near the end of the episode. Rob even asks “Do you like LCD Soundsystem?” in a way that sets up a potential speech that is going to put everything into perspective, or even explain the format choices of the episode, and then they both shrug it off entirely. That was actually the breaking point for me — when you could tell the show itself was consciously falling apart.

RK: That was a really interesting moment for me, as so much of this show seems directly aimed at me, my life, my relationship philosophies, etc. I normally don’t get too personal with my criticism, but it seems impossible not to in this case. At any rate, LCD Soundsystem seems like one of those generational things that I just… missed. Almost entirely. I’ve listened to a bit and they’re okay. The mention made it sound like the show was about to dive into this generation and this lifestyle and this band as normal for its generation of characters…and then it didn’t. It avoided normalizing behaviors.

So yeah, I expected this sort of “we’re all the same” moment, where the people worrying about bougie daycare for their daughter and the people who desperately filled their recycling bin with alcohol bottles in order to continue seeming cool would kick off a dance party.

Instead, we get a moment where that idea is rejected almost offhandedly. Then it all breaks. The point-of-view shifts from Rob to Gretchen, and Rob’s depression, even with his perfect-looking Cool Dad life, is made clear. There are no easy answers.

What I like about this — what rings most true about this — is that Gretchen and Jimmy’s lifestyle isn’t proved wrong. There were moments earlier in the series when it seemed like You’re the Worst wanted to be the story of romantic redemption, about how two assholes fell in love and the process of compromising with one another led them to become good, normal adults. Two thirds of “LCD Soundsystem” made it look like this was happening again. Then it redeemed itself by not redeeming itself.

I’m not sure if I liked the episode. I’m not sure how comfortable I’ll be watching it again. But I respected the hell out of that and definitely say that this is continuing You’re the Worst’s incredible Season 2 winning streak.

BW: You hit on the bit about the generational aspect of LCD Soundsystem as a group and I think that’s what makes this so important, because just like the band, there are these ideas (vaguely generational) about happiness, and work, and relationships and this show is dabbling in whether or not they apply or can apply to everyone. From the band perspective, LCD was a huge thing for me but not for people two years younger than me, but I also see it being very important to some friends I have that are seven years younger than me, so it’s really generational when you don’t get it but seems universal when you’re in it. And that applies to these character relationships as well. There’s nothing about the older couple’s relationship that technically sets them apart from Gretchen except the band references in the posters adorned the walls of the home. Similarly, to the outside this looks like a generational ideal of happiness and cohabitation and “making it work” that seems both exceptional and unrealistic, that falls apart as soon as Gretch spends just a few minutes inside their home.

I agree that this show once seemed to be about romantic redemption, but this is a pretty clearly written thesis now (and building off the previous episode) about the pointlessness of trying to fix someone. And in a lesser show, all of this protest about unsolvable natures of humanity would still crescendo in some big solution, but here we’ve got collapse on all sides, and this is the episode where we finally pull the audience down into the depths with Gretsch instead of making a big push for resolution.

We also have this lesser plot about Jimmy trying to trick himself into writing with this series of failsafe threats in the form of damning letters, and his friends watch as drinking and darts gets repurposed as “writing”— I know there’s bigger generational implications here as well, but this was just a real punch in the dick on a personal level and I scrambled to hide the beer I had in hand while watching at this point.

Rowan, I think you’re the best… at friendship. Bye!!!