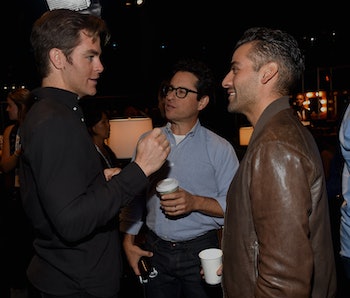 So, the Force has been awakened and a new cast of people have trekked out into the stars (twice), and they’re getting set for round three. We’re at a point now where two of the biggest geek franchises out there also happen to be two incredibly lucrative movie series that will keep chugging along for however long said geeks continue to buy tickets. This is to say, we probably won’t be getting rid of Star Wars or Star Trek anytime soon. But with the crippling anxiety of endless hunting for new talent to make or break your billion-dollar movies causing the pool of eligible and reliable Hollywood actors to dwindle, does this mean we might be able to see a legitimate actor or actress crossover? Will an actor standing on the bridge of the U.S.S. Enterprise in Star Trek suddenly be prominently featured in another role in Star Wars? Will the actor playing a dashing X-Wing pilot soon be battling Klingons beside Captain Kirk? In Hollywood, blockbuster filmmaking there seems to be room for everybody.

“Wait, wait, wait!” you scream at me before we even begin. “Simon Pegg was already in both new iterations of Star Trek and Star Wars! He played Scotty and the junk dealer Unkar Plutt in The Force Awakens! And so was Deep Roy, the guy that played Droopy McCool in Return of the Jedi, and Keenser in the new Star Trek movies!” In both cases, you’d be right, good for you. Both Pegg and Roy have appeared in both franchises, no doubt helped by their connection to director J.J. Abrams, who is the main man that helped update both franchises.

But we’re talking about something different. Sure, Pegg was a main crew member of the Enterprise, but he was buried behind makeup in a semi-secret role for TFA, and Roy has been a less-than-minor character in both as well. We’re talking about lead roles; people who are going to be first on the call sheet and get top billing on the posters. They’ll be the ones most likely standing next to the director at the premiere or being hounded by fans.

At first glance this would seem like a no-brainer. There’s no way that studio executives or filmmakers would risk putting the same faces of one franchise in another and risk confusing audiences or assuming that they know actors on a name basis. Any regular Joe or Jane moviegoer won’t know Oscar Isaac from Chris Pine or Daisy Ridley from Zoe Saldana. But still, audiences aren’t that stupid, and neither are the executives or filmmakers. Talent is talent, and if an actor can just be good, then why not plug them into another role in your big franchise? It’s more likely than not one less thing to worry about.

And it’s not just old white dudes who get to share the blockbuster wealth either. Samuel L. Jackson wielded a lightsaber as Jedi Master Mace Windu in the Star Wars prequels and he’s currently swaggering across the leader of S.H.I.E.L.D. in the Marvel Cinematic Universe. And Jennifer Lawrence just wrapped up her lead role in the multi-billion dollar Hunger Games franchise and will reprise her role as Mystique for the third time in next year’s X-Men: Apocalypse. If it’s young white dudes you want, allow us to suggest Jeremy Renner turning up in the Marvel Cinematic Universe and helping Tom Cruise get into spy shenanigans in the Mission: Impossible franchise, or Chris Pratt headlining Guardians of the Galaxy and Jurassic World, and being on the potential shortlist of actors to take over as Indiana Jones.

Clearly nothing’s really preventing someone from appearing in both active and massively popular franchises with “Star” in the title. But who would be the best candidate? Pegg is most likely out, unless (God help us) some kind of Jar Jar Binks-esque comic relief is built into the next Star Wars movies. Saldana can most likely be an awesome heroine, though she might not want to tread the same ground as she did in Guardians of the Galaxy. We could also see Pine go toe-to-toe against Isaac in either franchise in a handsome-off, or John Cho or Anton Yelchin show up in unassuming lead roles in one of the standalone Star Wars movies.

The possibilities are endless, and the precedent is set to make it so. It could even help cool the tensions between Trekkies and Star Wars fans. Both franchises will continue to go where few have gone before, so it’s only a matter of time before we see the same faces criss-crossing the galaxy whether they’re going to war or going on a trek.