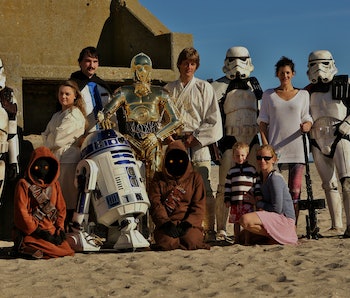 There’s been a great disturbance in the Force, as if millions of geeks suddenly cried out in indifference and were silenced. We fear something terrible has happened. Nearly four decades of voracious Star Wars fandom has passed — starting off as a few sci-fi enthusiasts interested in a strange new movie and eventually exploding into full on armies of fanatics whose lives are lovingly devoted to the saga — and yet they have no agreed-upon moniker. How can a group of like-minded devotees parade around countless Comic-Cons, movie premieres, and geeky social gatherings without knowing what to call their obsessive cohort? We’re here to help figure out what to call these Star Wars fans that proudly display their nerd-dom.

Naming a group of fans a goofy name is nothing new. Justin Bieber has his Beliebers, the Grateful Dead has the Deadheads, Taylor Swift has Swifties, and Barry Manilow even has the (sorry for this) Fanilows. Non-puns work, too. Slipknot fans go by Maggots, Nicki Minaj admirers are Barbies. And you probably picture the Insane Clown Posse the moment someone mentions Juggalos in any context.

These designations designate a tribe, a unified clique. When you belong to a fanbase it’s like being part of a club, so much so that you get the sense that the only people that truly understand you are the other club members. There’s something cathartic about belonging to such a groups. They’re the only other ones keyed into the bizarrely specific niche that your fandom occupies. They’re the ones that understand your specific jokes, why you dress up to go to events, and why you’ve watched the Blu-ray to a movie a thousand times but are eager to watch it again just because it’s been a few days.

Weirdly enough, these collective labels seem particular to music fans. Really, the only other widely known group of fans in pop culture are Trekkies. It’s something that Star Trek fans have been able to shove in Star Wars fans’ faces and brag about for decades. You can dress up like Jean-Luc Picard, tell someone to “Live long and prosper,” and debate the odd-numbered movie versus even-numbered movie “Star Trek Curse” all while reveling in your worldwide squad of fans. As far as a unified identity is concerned, Trekkies rule.

Yet the lead-up to the release of The Force Awakens this week has reignited the passions of Star Wars fans the world over. Their love is alive and well again (it really never left), and considering the fact that we’ll continue to have Star Wars movies for as long as people will fork over money to see them it’s time to make it count. So what should they be called?

With a mythology as vast and vivid as Star Wars there’s a lot to choose from, and a lot of potential names that could easily devolve into cheesy territory. A bad name could undercut the nerdy, appreciative core that brings all the Star Wars fans together. Things could get nasty, lightsabers will be broken, parents will be called. It won’t be pretty. You could go the obvious, lazy route and just label SW fans something from the actual saga like Jedis, Padawans, Wookiees, and what have you. That’d be too obvious and wouldn’t catch on.

You could get clever and call them “Enforcers,” you know, like the Force?

The next best thing would to go the Trekkies route and use it as a play on the name of the saga itself. “Star Warrior” or “Star Warriors” could work, but on second thought it could be a bit too hostile. Despite the obvious animosity in the title, Star Wars is supposed to be a fun thing for kids, emphasis more on “star” than “wars.” On top of that, there’s bound to be a copyright infringement lawsuit waiting to happen from the Golden State Warriors if anybody decides to make it official.

This brings us to our final choice. It’s something staggeringly simple and obvious. But why don’t we just stick with calling Star Wars fans … Star Wars fans.

Yep, that’s it. No fuss, no muss. Star Wars fans need no elaboration; they, more even than Trekkies, pioneered modern geek fandom as we live it today. They got to this thing first, so they get to claim the base-level nomenclature.

When you think about it, there’s no other real choice. Like the Force, Star Wars fans need to just let it flow through them and it’ll seem like second nature. You’re probably calling them that already anyway.