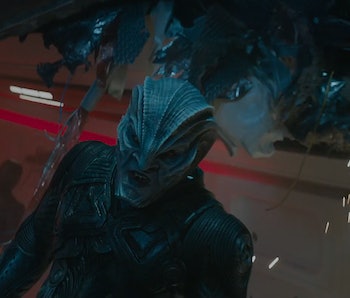 The trailer for Star Trek: Beyond crash landed this week amid the shouting of Beastie Boys and the moans of fans. No less than nerd icon and former Star Trek whipping boy Wil Wheaton found himself utterly baffled by this attempt to turn the long-running sci-fi series into a conventional Hollywood blockbuster.

The trailer was released this week so it could be attached to the indomitable marketing bonanza that is Star Wars: The Force Awakens. There’s a natural parallel there, but the franchises are receiving very different welcomes. The question now is this: How did Star Trek go from being an exciting reboot to another science fiction flick so quickly?

Follow up question: Is this something that other franchises — particularly those helmed by Trek reboot maestro J.J. Abrams — should worry about?

One of the problems is simple: The new Star Trek movies aren’t as good, or as smart, as the series was at its peak two decades ago. It’s certainly arguable that Star Trek really should be written for the small screen, with the space for quiet, genius episodes like “Darmok.” Yet even with that caveat, the first two rebooted Star Trek films were generally well-received, with Quentin Tarantino, genre film expert, declaring the 2009 Star Trek his favorite film of the year.

So the problem isn’t the films themselves, which, while limited, have generally been well-received. Instead, the problems have awoken in the marketing department. The fans have been sent one clear message: GFY.

During the marketing blitz for Star Trek Into Darkness, J.J. Abrams went on The Daily Show and revealed that he’d never really liked Star Trek before he started working on it. It was “too philosophical” for him, and he had always preferred Star Wars. Given that this is arguably the second-longest running argument in geek culture (behind only “Why didn’t the Fellowship ride the Eagles to Mount Doom?”), this was a major gaffe.

Yet fans — people really — are quick to forgive and always enjoy a prodigal son story. Had Abrams clearly come around to the joys of Trek, everything would have been fine. But it’s hard not to look back at his Star Trek films and see the would-be space western of someone who would rather have been making Star Wars. And Abrams’ conversion seemed to be more about using his new films to superficially refer to the older stuff, instead of grasping what made it great. For example….

Khan Noonien Singh was arguably the greatest villain from the original Kirk era of Star Trek, with the best-regarded film, Star Trek II: The Wrath of Khan bearing his name. Any devoted Trek adaptation would be hard-pressed not to include Khan in its second installment, and when Benedict Cumberbatch was cast as the villain, speculation ran wild that Khan would be the villain here as well.

And then J.J. Abrams lied, denied, and obfuscated about Cumberbatch’s role, insisting that it was a new character, that it wasn’t just Khan, that fans were wrong. This might have worked up until the film came out, and Cumberbatch was, in fact, Khan, that the film was an homage to the first Star Trek II, and critics trying to review the movie, whether positively or negatively, had to decide if actually saying the name of the villain was a spoiler or not. The discussed shifted almost entirely from “Is this movie worth watching?” to “How much can we talk about Khan?” It was a move that made it seem like the new Star Treks disrespected fans, and while Abrams apologized, it was a lost cause.

Benedict Cumberbatch is certainly a well-loved actor, and he’s also quite capable at doing his job, so casting him as the villain of the Star Trek film was a perfectly good idea. Casting him as Khan, however, was an act that put the erstwhile Sherlock in a minefield of problematicism.

The problem: Cumberbatch is white, and Khan, historically, was not. Khan was an iconic role, played by a Ricardo Montalban, a fully realized villain instead of a mere stereotype. Now, there are certainly issues with Montalban, a Mexican-American playing Khan, an Indian. Yet that paled in comparison to the pale Cumberbatch playing “John Harrison” as a whitewashed version of Khan. Even cast member John Cho diplomatically criticized the choice by talking about how his favorite villain was played by a man of color.

Star Trek has a long history of racial and ethnic progressivism, from having one of the first on-screen interracial kisses to adding a lovable Russian to its crew at the height of the Cold War. That the reboots seemed to actively work against this history by putting a popular white actor in a role made famous by a man of color rejected that history, for the apparently cynical reason of pulling in Cumberbatch’s enthusiastic fanbase. On its own, perhaps this could have been forgiven. But combined with everything else, losing the liberal wing of Star Trek fans didn’t help, at all.

J.J. Abrams was widely treated as the auteur behind the Star Trek reboots up until shortly after Into Darkness was released. That’s when critics noticed that certain themes of the storyline about Federation military conspiracies not only didn’t align with Star Trek’s history, but also specifically aligned with the “Truther” movement of 9/11 conspiracy theories — specifically, that the government committed the terror attacks of September 11th in order to declare endless war and clamp down on freedoms at home.

Screenwriter Bob Orci was handed the keys to the franchise after Abrams left for Star Wars. He was also a 9/11 Truther. This combination didn’t look good on the internet. What was, at first glance, a mildly cynical, rollicking action movie storyline with a bunch of plot holes suddenly turned into something more sinister: a popcorn movie serving as an accusation that literally everyone in power in American society was involved in a conspiracy to lie about the biggest event of the past several decades.

Again, Star Trek could have survived even this. The thing about seductive false flags, conspiracy, supervillain stories is that they’re seductive for reasons: they’re good stories. And the vast majority of fans probably never even heard of Orci’s conspiratorial predilections. But the ones that did, the ones who cared enough to look into the political underpinnings of the film’s script? Those are the fans who would have been in the vanguard of sharing and caring about Star Trek: Beyond’s trailer. Instead, the series felt more like an embarrassment.

Speaking of plot holes, Abrams and Orci went a little bit overboard integrating the tribbles, the seemingly-cute, fast-breeding creatures from the famous “The Trouble with Tribbles” episode of the original series into the second rebooted film. For one thing, it’s reference overload — between Tribbles and Khan, Into Darkness ended up waving at arguably the two most famous storylines in original Star Trek history.

But exactly how the tribbles got integrated turned into the bigger issue. In order to fix the grand, Khan-based death scene, tribbles got used by magic future science as a way to cheat death. Not only did this puncture the emotional effect of major death, lasting a matter of minutes instead of years, but it also broke the universe, to the point where the only thing the new creative team could do to fix it is pretend that it never actually happened.

Star Trek Into Darkness probably felt like a supercool, clever title that avoided the over-colonizing of film titles … once. But much like the Be Sharps, what was clever once became progressively less clever with every repetition. Even now, it’s like: seriously? That’s how you wanted your film to be remembered forever?

There was potential for Star Trek: Beyond to transcend these issues, to become a perfectly fine sequel or even a new classic. Abrams had long since departed for Star Wars: The Force Awakens. Orci, initially the heir to the throne, was unceremoniously dumped as his 9/11 heresy became more public. In his place as director came Justin Lin, director of the increasingly beloved Fast and Furious films as well as arguably the greatest Community episode of all time. The new screenwriter was Simon Pegg, Scottie in the films, and a man of unimpeachable geek cred.

Yet if the Star Trek reboots have turned a corner, they certainly didn’t look that way after this week’s Star Trek: Beyond trailer came out. After all of the debates and discussions and reactions, what Paramount revealed looked like nothing more than a science fiction action movie dressed in Star Trek uniforms.

And that’s saying nothing of the music selection, the Beastie Boys’ “Sabotage.” Not only is this a reminder of some of the most embarrassing parts of the Abrams era, but it’s also a reference to one of the greatest music videos/fake trailers of all time. If you can’t even beat a fake trailer with your real one, why even bother?

Here’s the simple fact of the matter: fans aren’t excited for the new Star Trek movie because the franchise has consistently squandered their goodwill, and hasn’t done enough to regain it with the marketing for Star Trek: Beyond. Ironically, almost everything negative about the trailer itself — the music, the editing, the lack of plot details — could easily be fine in the final product. The crew of the Enterprise crash-landing on a planet, and finding themselves in a violent political situation is a perfectly good setup for a strong Star Trek film. But at this point, who would actually trust Star Trek to get it right?