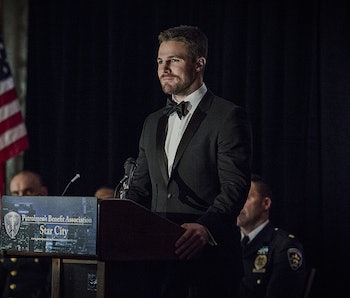 Oliver Queen is running for mayor of Star City. He also fights crime as the Green Arrow. When the city is razed to the ground it will be his fault, a not at all subtle parable for the 2016 presidential election.

The driving engine of Arrow this season is Damien Darhk’s eventual showdown with Oliver, the ex-prince of the Queen Consolidated empire. At the end of “Brotherhood,” Ollie threw down the gauntlet at a press conference, saying in code that he will fight and defend the city “in the light of day” against Darhk. Poetic, but stupid. Way to prop up the city up as your shield, fearless defender.

Star City (previously Starling City) has always been an analog to IRL troubled cities like Newark and Chicago, but in the fourth season it now resembles Detroit and its emptier neighborhoods. Star City is wrecked with weak infrastructure, a lethargic government, and a populace in exile. It has become so vulnerable that Damien Darhk, a man that even Ra’s Al Ghul feared, managed to waltz in and own the place — which he does, with Captain Lance tied to his puppet strings. And that’s where Oliver comes in, meshing superheroics with civil service.

Practically speaking, how shitty of an idea is that? How can Oliver attend union labor meetings and then find time to shoot arrows into armed supervillains at twilight? There is an actual Lonely Island song about this and it’s hilarious because of the implausibility, even in a DC superhero show.

There are no foreseeable Oliver Queens in the current state of the presidential race. Oliver’s background as the spoiled prince of private industry pits him as a close Donald Trump, but there’s already a better villain for that resemblance and Trump’s only physical feat is pointing a finger at China.

Queen’s distinct lack of political allegiance frames him as an ineffective candidate. (Who does he stand for? The people! Ugh.) Not that he needs much formidability at the moment: Star City is so screwed, Ollie is running unopposed as of this week’s episode. That will have to change because this is television, and all signs point to Darhk running against him, taking up Ollie’s challenge to fight “in the light” of debate spotlights and TV news cameras.

It’s good drama to have a superhero and a supervillain fight from behind podiums instead of behind masks. But is that the kind of sick ethos our actual candidates are telling themselves to win the electorates? If Trump and Carson and Sanders and Clinton and who ever else are fancying themselves as heroes of their narratives, maybe they should tune into Arrow and see how fucked that could end.

If Star City’s choices for a civil leader are a spoiled, altruistic thrill-seeking vigilante and the psychopathic leader of an armed terrorist group, both of whom have been trained by a mystical ninja in Indochina whose name translates to “HEAD OF THE DEMON,” the citizens might want to consider a write-in candidate. Maybe Deez Nuts.