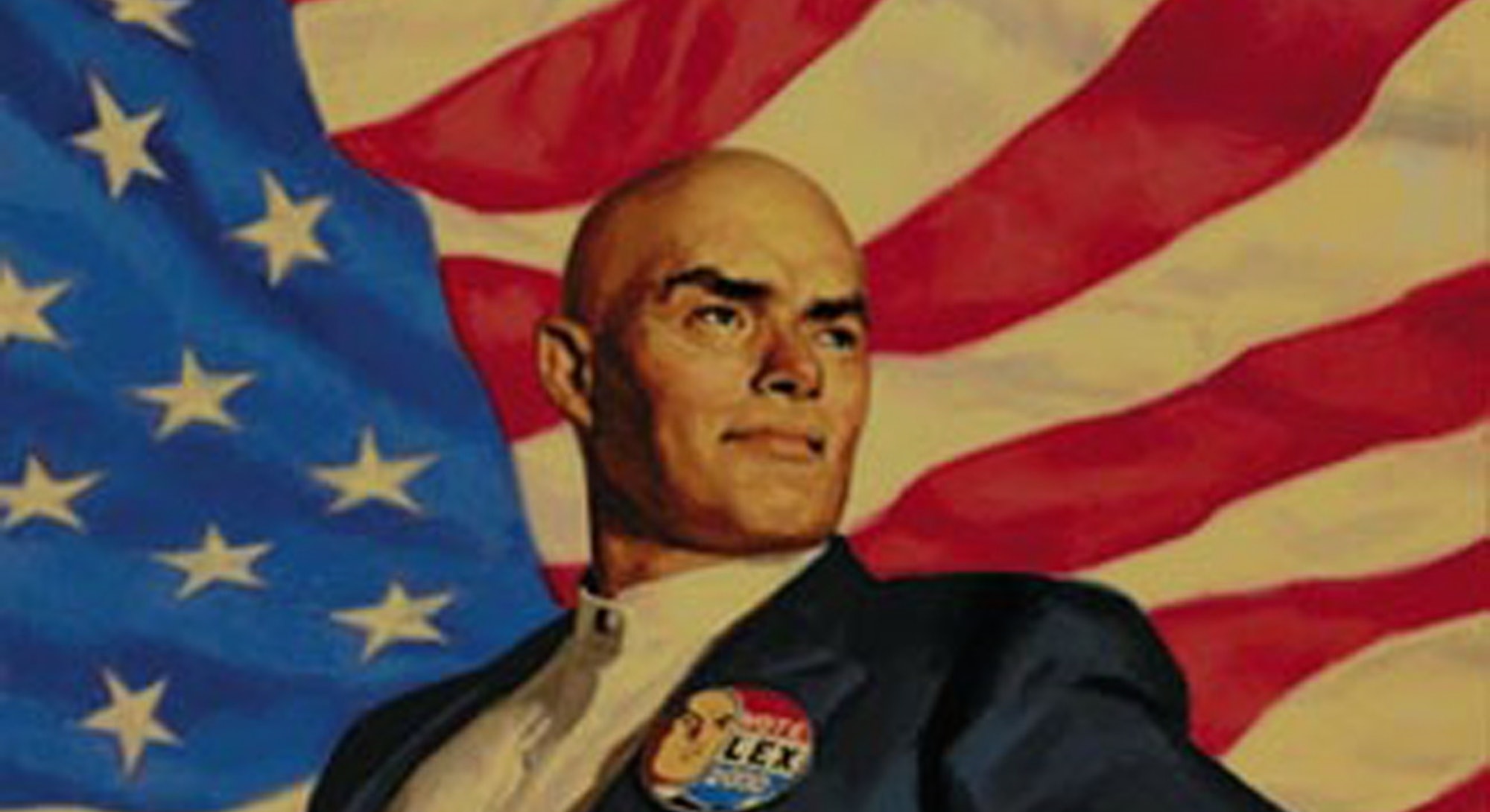 Last night, Donald Trump stood center stage at the Quicken Loans Arena in Cleveland, Ohio. He was immaculately orange and his tie was diabolically red. Almost physically incapable of ceding ground, he said he wouldn’t support a non-Trump Republican candidate, boasted that his personal wealth involved ten zeroes (Forbes has him at 4.1 billion), and proposed the construction of a U.S./Mexican border wall.

It’s a coincidence worthy of note that Trump was making his anti-alien pitch in Cleveland, the hometown of Joe Shuster and Jerry Siegel, creators of the all-American alien Superman. Fear-mongering against aliens from cartoonish billionaires that made their fortune in the private sector. Bring anyone to mind? It should.

President Lex Luthor took the oath of office in the DC Comics universe in the mid-2000s. Having gained popularity by promising technological progress — and saying some less relevant stuff about Atlantis — Luthor rode a pro-business wave into the White House and, in so doing, put Superman in an awkward position. Would the red-caped crusader choose justice or the rule of law? Would he impeach his enemy with his fists of let the American people get what they deserved?

The parallels between the Luthor and Trump campaigns are geometrically perfect. Both men leverage the public perception of business acumen to sell themselves as strong executives then cite questionably looming crises — a Kryptonite asteroid for Luthor, an unsustainable immigration wave (we’re at net zero BTW) for Trump — to excite a nervous base. They run for office by running against stuff.

That said, the endgames here still look different. Trump won’t be elected President, but if we lived in that sort of world, he probably would not also get beaten out of office by a dude dressed like a bat and a part-time reporter. All that said, it’s fun to look at what happened to Luthor and consider what it might augur for a Trump presidency.

In the Justice League animated series, Luthor’s presidency was a key point on several occasions. In the episode “A Better Tomorrow,” The Flash is dead and Luthor is baiting Superman to assassinate POTUS, ending his life but also giving him the ultimate victory.

Later on in the sequel series, Justice League Unlimited, this alternate timeline is discovered by expert sleuth, The Question, who tries to prevent it from ever happening in the real timeline… by killing Lex Luthor. This, unfortunately for our faceless friend, happens while Luthor is super strong and an ass kicking ensues, but only after the arch villain asks his own question: “President? Do you know how much power I’d have to give up to be President?”

And there’s something there as well. A lot of observers don’t think Trump is running for president. They think Trump is running for Trump, to bolster a personal brand he’s never been shy about. The idea of a businessman running for an office he doesn’t ultimately want is powerful because it suggests that the perceived powers that be aren’t the real powers that be and, furthermore, that voters don’t necessarily understand the motivations of the people they support.

This is rich source material for both comic book scribes and political journalists.

After the farce that was last night’s debate, it no longer feels over the line to conflate one cartoonish egomaniacal billionaire’s quest for power with another cartoonish egomaniacal billionaire’s quest for power (or attention). The only missing ingredient here is Superman himself. In our reality he’s just a reporter — presumably a pretty flummoxed one at this point.