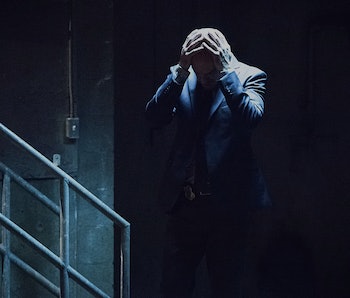 One of the great mysteries of Arrow this season has been Captain Lance’s alliance with Damien Darhk. Why?! The pillar of Star City’s unwavering justice could never be in cahoots with a man who wants to raze it to the ground, yet here we are.

Throughout Arrow, Oliver Queen and Captain Lance never entered the kind of partnership that Batman and Commissioner Gordon have. They want the same thing — to protect and improve Star City — but they can’t ever agree to do it in the same way. Lance’s staunch anti-vigilante crusade in season one was typical of modern superhero tropes, and his eventual warming up to the Hood (Remember when Oliver barely had a name for his identity?) was a natural swing of the pendulum. When Lance learned that Oliver was the Arrow it tainted whatever working partnership they had, and they’ve been like that since.

And it’s because Lance had always been justifiably right. The show has done a bit of an overhanded job in reminding you Oliver began his superhero career as a killer, and that true justice laid in the law. It took Oliver years to understand that, but Lance knew from day one. And he dangled that in the Arrow’s face, constantly reminding him that though his tactics are effective, it isn’t justice.

For the first time, “Beyond Redemption” showed Lance wasn’t right.

Star City is dying, and the people who run the city are desperate. Captain Lance is effectively the entire SCPD, and this week showed how alone he is when an entire portion of the police have resorted to crime. In his desperation, Lance accepted the power of a man who literally walked right into the city and declared it his own.

The Arrow killed but believed it justified his mission. Now, Lance has aligned with a powerful, psychopathic, and dangerous killer and he believed it would justify his mission to save Star City. He couldn’t be more wrong, and upon realizing it — with Oliver Queen, not the Arrow to look him in the eye — Captain Lance broke.

Both Paul Blackthorne and Stephen Amell should be commended for the performance they gave this week. It was more than just a shouting match, it was years of begrudged acceptance, reluctance, and personal anger (Remember that Oliver cheated on his daughter with another that led one to her presumed death) that boiled to the surface.

Nothing else really mattered in “Beyond Redemption.” It was just Lance, who also wrestled with the discovery of his resurrected Sara, and Oliver/Arrow reaching some kind of common place. Even if the pendulum is bound to swing again.