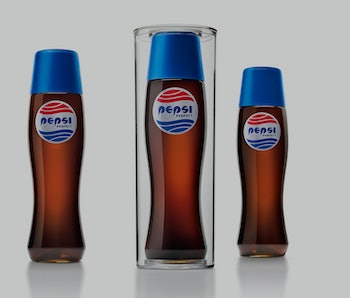 On October 21, Back to the Future Day came and went, and everybody seemed to get in on the fun — except maybe for the Chicago Cubs. When the clock struck midnight on the day that Doc and Marty head to 2015 in Back to the Future Part II you could ride in Uber sponsored Deloreans, look forward to scooping up some self-lacing Nikes, or check out Google’s fake schematic for a time machine. But perhaps the best BttF Day tie-in was Pepsi Perfect, a specially-designed, limited edition run of bottles of Pepsi made to resemble the drink ordered by Marty at the Cafe ‘80s in the first sequel. You were lucky if you got your hands on a bottle — they sold out almost immediately. We caught up with PepsiCo’s senior design manager, Adam Waugh, to see what it was like bringing this iconic future design to the present.

“I’m a huge BTTF fan and I remember seeing BTTF 2 in theaters when I was young,” Waugh told me, using that familiarity to his advantage. “I was hugely into video games at the time, and the Cafe 80’s scene resonated strongly with me. It seemed like the coolest place imaginable, so when I had the chance later in life to work on the Pepsi Perfect relaunch, I was able to bring a real understanding of how important it was to do it right.”

Pepsi laid its Perfect plans well in advance; preliminary work on the limited edition run was under way before Waugh joined the PepsiCo design group in late 2013. “Our design group is cross-functional, working in all disciplines of design,” Waugh explains. “The team that executed the Pepsi Perfect packaging work included industrial designers who developed the packaging forms and brand designers who developed the visual identity.” They worked closely with Universal, the studio that made BttF, to ensure fidelity to the films.

In creating the bottle, Waugh says, the team didn’t want to simply recreate a movie prop. “We wanted to make the bottle and graphics recognizable as the now-iconic version from the movie, but also optimized in subtle ways to make it feel modern and appropriate” he says.

That process involved tweaking the prop to create a visually distinct product. It started with adjusting the bottle design. “The taper of the movie version bottle leads to a very narrow ‘waist,’” Waugh explains. “A bottle design with a waist so narrow couldn’t be blow-molded, as it would cause a blockage in the flow of plastic to the base, so we had to modify the silhouette of the bottle while maintaining the critical essence of the shape.” They also explored different ideas, such as using an internal straw, despite the fact that it wouldn’t hold carbonation, as a way to approach real-life parameters for the design.

And what about that famous Pepsi logo? Waugh says the initial graphic designs for the bottle were more contemporary than the futuristic prop design and the one they ended up using.

“We explored a version that was purely modern with less reference back to the graphics from the movie,” Waugh says. “In the end we pushed the design to a version that was still current aesthetically, but was reverent to the original.” But he advises even sharp-eyed BttF fans not to worry: “Most people will see the design and think that it’s exactly as it was from the movie.”

Some of the limited edition 6,500 bottles were handed out at New York Comic-Con, where fans got the chance to interact in a special booth was set up to resemble the Cafe ‘80s.

“The most rewarding part for me was seeing fans at Comic Con who dressed up like Marty McFly in order to score a Pepsi Perfect,” Waugh said. “They were so excited to be part of our experience there, and the lucky ones who walked out with a bottle were ecstatic.” Another highlight for Waugh: playing a special arcade cabinet of Marty’s favorite video game, Wild Gunman, set up at their Comic-Con booth. “The game never existed in arcades, so playing it was a childhood dream come true.”