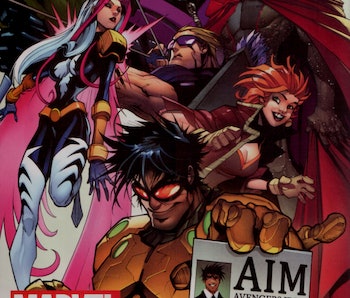 For the first time in Marvel’s illustrious history all of its characters are headed back to square — well, panel — one. The “All-New, All-Different” effort is drastic, but it’s hardly last ditch. This is an attempt by a thriving company to leverage the popularity of its characters into relevance. The opportunity here is to chase complete comic book multi-platform domination by publicizing the hell out of an effort to modernize and, importantly, diversify. Here’s what you need to know about Marvel’s extensive comic reboot.

Marvel’s main comic book narrative at the moment is called Secret Wars, a massive multi-title storyline that involves all iterations of many of Marvel’s main and tangential heroes from different so-called universes fighting on a planet conveniently named Battleworld. Got all that? Good, now forget all about it.

Acting more as a primer for the comic reboot, Secret Wars will be erased in favor of All-New, All-Different’s consolidating storylines. AN, AD will pick up eight months after a catastrophic event effectively ends Secret Wars, leveling the multiverse. Some characters will walk away from the ashes into their own star vehicles. Others will join new teams.

AN, AD will be introduced in two waves: the first in October and the second in November for an initial total of 45 new titles. Another 15 will trickle out sometime after that, with Marvel teasing each remaining title as they go. Check out a rundown of every new #1 title at ComicBook.com, including some hilariously brief plot teasers.

The old comics will still be canon somehow, but the characters, their interactions, and their normal storylines will be intentionally shaken up. So what’s actually new? Marvel will still keep all the new developments a secret as the series rolls out, but we do know some pretty awesome wide-ranging details about it so far. Deep breaths, here goes:

And it goes on and on. If you didn’t pick up on it already, Marvel is really trying to shake everything up, largely because they can. They’ve generated so much clout in the uber-popular Cinematic Universe that it’s obvious that it would want to return a bit of the emphasis back to the bread and butter of the superhero brand. It is, not to put a fine point on it, a bit confusing, but the endlessly tangential nature of comics was always confusing. It’s supposed to sound ridiculous when explained.

Will all this turmoil alienate comic book readers? Honestly, this kind of mixup is so complicated it’s bound to be popular. Die hards will come along for the ride if only to whine about it. From there, it’s up to the artists and writers to make this thing work.

We’ve come a long way since Bryan Singer’s X-Men movie kickstarted the now lucrative superhero movie trend in 2000. Now, the millions of people that bought tickets to each Marvel movie have an opportunity to feel possession of fresh characters, if not fresh powers. It also gives Marvel the opportunity to keep unloading trucks of cash into their coffers.

Despite the blatant cash grab aspect of announcing a big re-do, Marvel has actually invested effort into doing this thing right. Ta-Nehisi Coates, one of the most renowned African American journalists in the country, just announced he will write a Black Panther series. The addition of Amadeus Cho will make an Asian American into one of the most recognizable Marvel characters ever. Marvel gives Native Americans a hero in Red Wolf, and they also made Spider-Woman pregnant.

Though there still seems to be a dearth of LGBT+ characters, that doesn’t necessarily mean we won’t see any or that there won’t be coming out story lines. In a blog post, Marvel editor Tom Brevoort stressed that they wanted to get it right or not do it at all. “I need the story and the creative team to show up, and feel legitimate,” he said. “I don’t just want to do it because somebody else has done it, and in doing so, do it badly.”

Marvel has taken baby steps in the right direction, but “All-New, All-Different” is a giant leap for mutant kind. It’s confusing, sure, but that’s very much the point. Modernity is confusing. Stasis is a bad super power. Change is better.