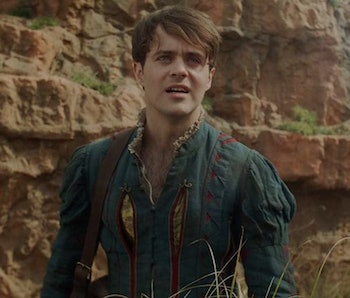 In Netflix’s The Witcher, most of the major characters we follow have magical augmentations and other mutations that prevent them from aging. Both Geralt of Rivia and the powerful mage Yennefer are essentially immortal of the ageless variety, meaning they can still die from injuries. That explains why these characters always look the same while the show covers a long timeline, but that doesn’t account for the bard Jaskier.

Geralt meets Jaskier in Episode 2, around 23 years before the Fall of Cintra. The unlikely duo eventually journey together when Geralt slays a dragon about 17 years later — but the totally mortal Jaskier looks the same.

“Yes, we dropped the ball on aging him up over the course of the show,” The Witcher showrunner Lauren S. Hissrich admitted in a Reddit AMA Monday. “It’s hard to show the passage of time when everyone looks the same, so we’ll be approaching that differently in S2.”

The specific question was about “Jaskier’s bonnet.” Particularly in The Witcher games, Dandelion the bard (the show uses the book’s original Polish name “Jaskier” that was changed for the games) is known for wearing a floppy bonnet hat in his later years, something the fan suggested could be used, along with facial hair, to convey the passage of time. And it just might happen for The Witcher Season 2.

“Ah, yes, the hat!” Hissich wrote in response. “It was made, we tried it on Joey, and we couldn’t stop laughing. Will we try again? Sure. Nothing is impossible.”

Jaskier does mention that a decade has passed in the episode “Bottled Appetites,” where they contend with a wrathful djinn, but actor Joey Batey looks more or less the same as Jaskier did in his debut earlier in the season. It doesn’t help what’s already a rather confusing timeline that spans around 65 years total.

The Witcher Season 1 challenges viewers with the way it presents the timelines. Particularly in the first several episodes, events we see with different characters take place (in some cases) decades apart, but the show doesn’t give any clear indication as to the timing.

“I didn’t expect this to be one of the most hotly-contested part of the series,” Hissich wrote in response to another question. “I like movies with structures I have to figure out as I go — other people may not. In this case, the people who hated it will luck out, because S2 is structured differently.”

In yet another comment, Hissich also promised that in Season 2, “the story will be much more linear.”

[Must Read: How to navigate the timelines on Netflix’s The Witcher]

Now that all three of the major characters — Geralt, Yennefer, and Ciri — have more or less converged in one place, The Witcher Season 2 will become more linear. And the next time we see Jaskier rejoin the group, it will have been about six years since he sought a dragon with Geralt and Yennefer. Will he have his signature bonnet and a goatee at this point? We can only hope.

The Witcher Season 2 goes into production soon and should be released sometime in 2021.