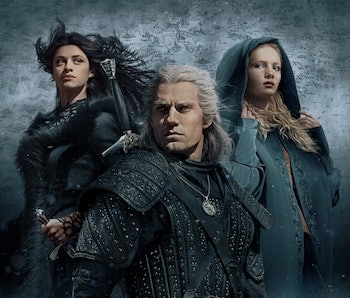 The Witcher’s freshman season on Netflix juggles oodles of magical elements, from monsters to mutants to spells. But the most magical thing about the show its non-linear storytelling. The Witcher takes place across three timelines, one following each lead character. The timelines distinguished through supporting cast members. (You’ll probably notice this by seeing someone who “died” early on return in a later episode.)

The Witcher doesn’t spell this out terribly clearly, making the chronological order of events quite a tough nut to crack.

According to showrunner Lauren S. Hissrich, this wasn’t just an attempt to keep viewers watching and guessing. Instead, The Witcher’s timelines were necessary to keep all its main characters onscreen.

“In order to have these things playing simultaneously we had to play with time a little bit,” Hissrich tells Inverse.

If you’re as confused as I was, here’s everything you need to know about what happened and when in The Witcher’s various timelines.

Warning! Spoilers for The Witcher Season 1, Episodes 1-7 below.

How do timelines work on The Witcher?

There are three timelines, one following each character. Each covers a specific period in that person’s life until they interact with another lead.

First is the Yennefer timeline, which begins when she’s roughly between 16 and 19, covering the witch’s school years and the start of her professional mage career. Though time passes quickly in the show, we can assume she remained in Aretuza magical academy for, at a minimum, one year. After graduating, Yen joined the King of Aedrin’s advisory team. According to a line in episode four, she remained in the position for three decades.

After a three-decade leap forward, she’s successfully in Geralt’s neck of the timeline. Their stories sync up in Episode 5. This is also evidenced by the change we see in King Foltest, who attends the mage’s ball as a child in Episode 3, while simultaneously appearing as a fully grown adult before Geralt. If you need more proof they’re the same person, young Foltest refuses to leave his sister alone until their mother intervenes, foreshadowing his attraction to his sister later in life.

The era of Geralt’s story is straightforward. Using Pavetta’s pregnancy reveal in Episode 4 and the line Episode 7 where Calanthe remarks that Geralt has been away for 12 years since he claimed the Law of Surprise, as markers, Geralt’s main section takes place 30 years after Yen’s school life begins, and a little over 12 years before Ciri’s story.

Ciri’s story takes place in The Continent’s “present day,” if that phrase is applicable to a fantasy story.

Why is The Witcher structured in this way?

Witcher showrunner Lauren S. Hissrich tells Inverse a major reason was to get the women into the story faster.

“It was really important for me to build up those characters, and make them part of this world, the continent, the politics, the stories, all of it from the very beginning,” she says. “I also didn’t want to lose some of the great adventures that Geralt has that are in the main first two books of short stories. In order to have these things playing simultaneously, we had to play with time a little bit.”

*Season 1 of The Witcher is available to stream now on Netflix.