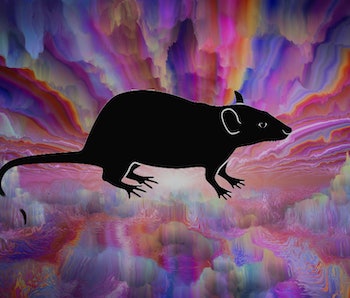 Devotees of microdosing don’t view the practice as simply doing drugs. Instead, they claim that taking a very small dose of a psychedelic drug can [hold unexpected health benefits]((https://www.sciencedirect.com/science/article/abs/pii/S0955395919301161?via%3Dihub). Microdosing may reduce anxiety, decrease symptoms of depression, or boosting one’s creativity. But the problem with all of these purported benefits is that there’s not enough research to back them up.

In March 2019, scientists took a step closer to unraveling the science behind the anecdotes, when a team led by University of California, Davis assistant professor David Olson tested how psychedelic microdosing affects behavior in animals. They gave male and female rats very small doses of N,N-dimethyltryptamine (DMT), the principal psychoactive component in the hallucinogenic brew ayahuasca. Their results suggest DMT microdosing can promote neural plasticity in key brain circuits related to anxiety and depression. But they also hint at potential downsides that are worth investigating further.

This is #2 on Inverse’s list of the 25 biggest science stories of human potential of 2019.

“I think the most pressing question to answer right now is the issue of safety,” Olson told Inverse at the time. “It’s very possible that while microdosing might have beneficial effects for healthy adults, it could come with severe side effects in other populations.”

The study was published in March in the journal ACS Chemical Neuroscience.

The team used DMT because they wanted to experiment with a drug that’s the most applicable to the broadest range of psychedelic compounds. Olson explained that when other psychedelics like magic mushrooms or LSD are broken down to the molecular level, they are essentially the same as DMT. Because of this shared pharmacology, tests on DMT may be translated to other psychedelic drugs.

Because there’s no well-established definition of how big a dose a microdose actually is, the team gave the rats the equivalent of what humans typically use: one-tenth of a hallucinogenic dose. The rats were dosed at an age equivalent to a young adult, since young adults seem most likely to microdose.

The rats received the dose every three days for two months, and, after two weeks, the team evaluated their behavior on the days the rats were not given drugs. When they tested the rats to see if any aspects of their sociability or cognitive functioning had altered, they didn’t observe any changes. But they did find that microdosing appeared to alter the rats’ anxiety and fear responses.

When rats are put into water, the ones who are most anxious and afraid are expected to resort to floating over swimming the earliest. In this study, the rats on DMT had the same reaction as rats on antidepressants who undergo this test — they kept on swimming. This suggests microdosing made them less anxious when they encountered a challenge.

In a “fear extinction test,” microdosing appeared to help the rats overcome fear triggers at a quicker rate than normal, without also impacting their working memory.

But the researchers also noticed two strange, ill effects. Male rats treated with DMT gained a significant amount of body weight, while neurons in the female rats appeared to be breaking down. These results are “a little concerning,” Olsen said — and the team don’t know why they happened.

The study highlights just how much scientists don’t know about microdosing — and the potential hazards it could hold.

As 2019 draws to a close, Inverse is revisiting 25 striking lessons for humans to help maximize our potential. This is #2. Some are awe-inspiring, some offer practical tips, and some give a glimpse of the future. Read the original article here.

More like this
Innovation
Jan. 16, 2023
3D-printed “organs” could lead to better drugs
By The Conversation and Chengpeng Chen
Mind and Body
Jan. 24, 2023
Is alcohol bad for your health? Here's what the science actually says
By Katie MacBride
Mind and Body
Jan. 23, 2023
Can spicy food boost our gut health? Here's what the science says
By Katie MacBride
Related Tags
Share: