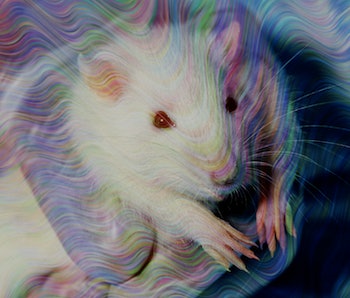 People who experiment with microdosing claim that it can help a person to think more creatively, feel less anxious, and sharpen focus. But despite plenty of anecdotal evidence and Silicon Valley’s ample claims that these positive effects are real, scientists still can’t definitively say that microdosing — consistently taking low doses of psychedelic drugs — actually works. Bringing us closer to a clear answer is a new study showing that microdosing can indeed have beneficial effects — but not without potential downsides.

This ACS Chemical Neuroscience study, published Monday, is one of the first to test how psychedelic microdosing effects animal behavior. The scientists, led by University of California, Davis assistant professor David Olson, Ph.D., microdosed male and female rats with N,N-dimethyltryptamine, the chemical substance better known as DMT and the principal psychoactive component in the hallucinogenic brew ayahuasca. Previous studies established that DMT affects rodents much like it does people, impacting behaviors relevant to mood, cognitive function, and anxiety.

Olson tells Inverse that his team used DMT because they wanted to experiment with a drug that “was going to be the most applicable to the broadest range of psychedelic compounds.” What he means is that, when the popular psychedelics LSD or psilocybin are broken down into their psychedelic elements at the molecular level, you’re pretty much left with DMT. Because of this shared pharmacology, it’s fair to say that tests on DMT can be translated to other psychedelic drugs.

Scientists already knew that DMT affected rats, but they didn’t know how a microdose of DMT would make them behave. And since there’s no well-established definition of what constitutes a “microdose,” the scientists gave them the rat equivalent of what humans typically use: one-tenth of a hallucinogenic dose. Furthermore, since young adults appear to be the most likely to microdose, they also used rats of equivalent age.

The behavioral tests were designed to measure how the rats responded to anxiety and fear-inducing situations as well as to examine how microdosing affected their sociability and aspects of cognitive function. It didn’t appear to change aspects of the mice’s memory or their ability to socialize, but two of the tests revealed how the drug regime changed their reaction to anxiety and fear.

In a common experiment called the “forced swim test,” rats are put in a large container of water, and then scientists watch to see whether they’ll fight to survive. Rats who are anxious and afraid are expected to be less likely to swim and simply “give up” by floating.

Previous studies showed that giving rats antidepressant compounds can make them swim for longer periods of time before resorting to floating. In this study, DMT microdosing induced the same effect: The rats remained mobile for longer, suggesting that microdosing ignited a more effortful response to a behavioral challenge.

Microdosing also seemed to help the rats overcome aspects of the “fear response” in a test used to investigate how humans with anxiety and PTSD react to a trigger. The “fear extinction test,” explains Olson, “involves very well understood neurocircuitry that’s conserved from rodents to humans.” In the first part of the trial, rats hear a tone and then receive a mild foot shock. Later, rats hear the tone but don’t receive a shock, the hope being they eventually learn that the tone is safe, thereby extinguishing their fear.

People with PTSD have a diminished ability to encode a new memory confirming that the tone is “safe.” But rats who were microdosed were able to extinguish the fear memory faster than they typically could without the drug compounds, suggesting that microdosing DMT could be beneficial as a treatment for PTSD. Olson and his colleagues believe it’s possible the microdosing regime was beneficial because “the compounds can promote neural plasticity in key circuits related to anxiety and depression.”

In small studies on humans, participants appear able to problem solve more creatively after microdosing and appear to be more open-minded. But despite the claims of humans, the rats in this study did not appear to experience improvements in sociability or cognitive function after microdosing.

The authors write that “psychedelic microdosing may alleviate symptoms of mood and anxiety disorders,” but they warn we should approach the results with cautious optimism. They discovered some adverse reactions: The male rats treated with DMT gained a “significant amount of body weight,” and the female rats experienced neuronal atrophy (a breakdown of neurons) that Olson notes is “a little concerning.” The team doesn’t know why it happened, but they say it’s worth investigating.

"…while microdosing might have beneficial effects for healthy adults, it could come with severe side effects in other populations.

“We don’t really know how these drugs or this dosing regime would affect a developing or aging brain, and there’s some indication that it could actually produce harm,” Olson explains. “I think the most pressing question to answer right now is the issue of safety. It’s very possible that while microdosing might have beneficial effects for healthy adults, it could come with severe side effects in other populations.”

Olson thinks it will be ideal if researchers in the field continue to try developing non-hallucinogenic analogs of psychedelic compounds that still produce the same beneficial therapeutic effects. That way, scientists wouldn’t have to worry about the abuse potential. Psychedelic drugs without the hallucinogenic effect could cut that potential for misconduct — and could lead to a future where regular microdosing could serve as a preventive measure for traumatic triggers.

Drugs capable of ameliorating symptoms of depression and anxiety while also improving cognitive function and sociability are highly desirable. Anecdotal reports have suggested that serotonergic psychedelics administered in low doses on a chronic, intermittent schedule, so-called “microdosing”, might produce beneficial effects on mood, anxiety, cognition, and social interaction. Here, we test this hypothesis by subjecting male and female Sprague Dawley rats to behavioral testing following the chronic, intermittent administration of low doses of the psychedelic N,N dimethyltryptamine (DMT). The behavioral and cellular effects of this dosing regimen were distinct from those induced following a single high dose of the drug. We found that chronic, intermittent, low doses of DMT produced an antidepressant-like phenotype and enhanced fear extinction learning without impacting working memory or social interaction. Additionally, male rats treated with DMT on this schedule gained a significant amount of body weight during the course of the study. Taken together, our results suggest that psychedelic microdosing may alleviate symptoms of mood and anxiety disorders, though the potential hazards of this practice warrant further investigation.