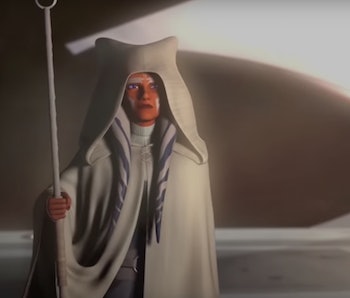 Were all the Jedi ghosts who supported Rey in her most desperate hour actually dead? It’s very likely those voices came from Jedi no longer among the living, but it’s also possible Rey tapped into the Star Wars version of time travel — and that might mean some of the Jedi we heard at the end of Star Wars: The Rise of Skywalker might not actually be dead.

Recent clues from the official Rise of Skywalker Visual Dictionary and Star Wars master Dave Filoni seem to suggest that’s exactly what happened, and it could mean that Ahsoka is actually still alive despite lending her voice to help Rey in Episode IX. To understand how this works, we’ll have to talk about the weirdest concepts in recent Star Wars canon, the World Between Worlds from the Rebels cartoon.

Get ready, it’s about to get weird.

Spoilers ahead for Star Wars: The Rise of Skywalker.

As many fans have pointed out, Rey doesn’t actually see any Force ghosts when she calls upon all the Jedi from the past to help her take out Emperor Palpatine. Instead, we’re treated to a kind of blank star-field and the ghostly voices “appear” in the abstract.

In fairness, the very first Force-ghost ever, Obi-Wan Kenobi, communicated this way when he said “Run, Luke, Run!” in Star Wars: A New Hope. Still, one detail has some fans wondering if these were Force ghosts as such, or perhaps, a form of Star Wars time travel.

As Reddit user hillmata13 points out, when we hear the voices of the Jedi in The Rise of Skywalker, we’re looking at a static sea of stars, which, is pretty evocative of the time-skipping series of interlinked portals present in the Rebels episode “The World Between Worlds.” In the episode, Ezra Bridger was able to rescue Ahsoka Tano from a possibly fatal duel with Darth Vader and bring her forward to a different moment in time. Essentially, this prevented Ahsoka from dying, but also presented a strange precedent in Star Wars canon that hadn’t existed before; the idea that living Jedi could impact future events without having “died.”

To be clear, nothing in The Rise of Skywalker outright acknowledges that Rey is accessing the World Between Worlds in this pivotal scene, but, the in-canon book Star Wars: The Rise of Skywalker: The Visual Dictionary does outright say that Rey had read about the World Between Worlds in the Jedi texts she took from the tree on Ahch-To in The Last Jedi, meaning, she was aware of this power.

Apparently, in those texts, the World Between Worlds is also referred to as “Chain Worlds Theorem” and the “Vergence Scatter.” This second designation is interesting because in The Phantom Menace, Qui-Gon referred to Anakin Skywalker as a “vergence in the Force,” which suggests the World Between Worlds would be another way to access other vergences that were perhaps, scattered.

Or, to think about it another way, the World Between Worlds is the only thing that links parts of the Force which had previously been balanced, which suggests that Rey — Doctor Who style — was actually reaching across space and time to borrow the power of the Jedi, and not being embodied by their spirits.

This theory gets an extra boost from a very telling tweet from Mandalorian writer, and Rebels showrunner (and creator of Ahsoka) Dave Filoni. On Christmas day, December 25, Filoni tweeted a sketch of Gandalf from Lord of the Rings, talking to Ahsoka saying “People thought I was dead, too. Look how that turned out…”

Okay, all kidding aside, what Filoni is implying here is that by the time of The Rise of Skywalker, Ahsoka isn’t necessarily dead. Instead, when Ahsoka tells Rey to “recognize” the Force within her, it’s possible that a still-alive Ahsoka is communing with Rey in some other way — like via the World Between Worlds.

Or to put it another way: Rey was able to learn some secrets of the Force because, unlike several Jedi before her, she actually decided to crack an old book every once and awhile. If Rey learned about how to get connected with various vergences in the Force thanks to those dusty old Jedi texts, then she truly is the best Jedi ever. And if she has the patience to look something up before rushing into danger, then maybe she is a bit more like a scholarly Palpatine than a hot-headed Skywalker.

Star Wars: The Rise of Skywalker is out in wide release now.

Clone Wars: Season 7, which features the retroactive return of Ahsoka Tano, will hit Disney+ in February 2020.