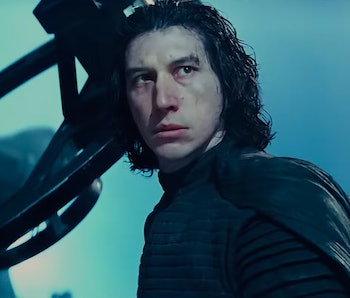 Rise of Skywalker had to be a lot of things to a lot of people. The final movie in a 9-movie saga. A sequel to The Last Jedi. A total renunciation of The Last Jedi. And, perhaps most importantly, a chance to Rey and Kylo Ren to finally kiss.

That’s a lot of pressure for one movie, and Rise of Skywalker actually does a pretty great job considering everything it had to accomplish. It’s not a perfect movie, but it’s fun as hell. And it also managed to come through on some very popular fan theories — including the Rey and Kylo stuff.

Read more of Inverse’s 19 favorite fan theories of 2019. Oh, and spoilers ahead.

9. Rise of Skywalker would finally give fans what they wanted: Reylo

Ever since the first screening of The Force Awakens back in 2015, a passionate group of Star Wars fans have been demanding one thing and one thing only: For Rey and Kylo Ren to live happily ever after. The Last Jedi teased the possibility with a “Force connection” that turned out to be the work of the Dark side, but The Rise of Skywalker fans gave ‘shippers their Reylo moment. Sort of.

At the end of TROS, after Emperor Palpatine is defeated and Kylo (once again Ben Solo) uses the Force to bring Rey back to life, the two share a passionate kiss. But, a second later, Ben dies, his life force depleted from saving Rey. We got the love, but not the happily ever after.

But then again, if Force ghosts can catch light sabers, who knows what else they can do…

Verdict: Correct, but at what cost?

Almost as powerful as “Reylo,” another popular theory argued that Kylo Ren/Ben Solo would be redeemed by the end of The Rise of Skywalker. There was even a hashtag: #bendemption.

Again, the fans were right on this one. (It’s almost as if the entire movie is just 2-and-a-half hours of fan service meant to juice its Rotten Tomatoes user score.) Kylo Ren gets redeemed thanks to the intervention of General Leia Organa (who sacrifices her life to speak to her son) and then the memory of his dad, Han Solo.

After a pep talk from Han, Kylo tosses his red light saber into the ocean and becomes Ben Solo once more. Then he rushes to rescue Rey from Emperor Palpatine just in time to die a hero and live on as a Force ghost.

7. Rise of Skywalker would undo The Last Jedi’s biggest twist

The Last Jedi made a bold statement when it revealed that Rey’s parents were “nobody,” announcing to the world that Skywalker genetics weren’t a prerequisite for being the Chosen One. Two years, later fans waited to find out if The Rise of Skywalker would confirm this plot twist or undo it for something else.

Back in April, Last Jedi director Rian Johnson hinted that Rey’s backstory could be rewritten, and closer to The Rise of Skywalker’s release, it became all but a given. As we now know, the new movie tried to have things both ways, making Rey’s grandfather none other than Emperor Palpatine while her parents were “nobodies” who tried to hide their child from the Sith lord.

So in a way, Rise of Skywalker didn’t undo Last Jedi’s greatest twist. But, ina bigger way, J.J. Abrams totally missed the point of what Johnson was trying to accomplish.

6. Darth Vader would be a ghost in Rise of Skywalker

You know what would have been really cool? If The Rise of Skywalker featured the first ever Sith Force ghost. Heck, we got a dead Han Solo cameo. So why not bring back the best villain in Star Wars history?

Inverse first speculated about the possibility back in October 2018, and in December of that year we got a big clue that it could really happen. Closer to the movie’s release, various leaks and rumors strongly hinted that Hayden Christensen himself could show up in Rise of Skywalker, putting a new twist on our Vader theory.

In the end, we didn’t get either, but we did get Christensen’s voice as part of a group cameo at the end of the movie. That’s gotta count for something, right?

Verdict: Close, but no death stick

5. Bruce Lee kills Charlie Manson in Once Upon a Time in Hollywood

Here’s a very bizarre true story from the very bizarre world of Hollywood: For a brief time, now-disgraced film director Roman Polanski believed that martial arts film icon Bruce Lee was responsible for the murder of his wife, Sharon Tate, and her friends (hair stylist Jay Sebring, screenwriter Wojchiech Frykowski, and Abigail Folger, heiress to the Folgers coffee fortune). The truth quickly came out that the killers were actually members of serial killer Charles Manson’s cult, but L.A. detectives theorized that a pair of sunglasses, belonging to Lee and found at the Polanski residence, may have belonged to the murderer.

Turns out Lee just left them behind, possibly while helping Tate train for her role in the 1968 action-comedy, The Wrecking Crew. Fast forward to 2019, and Quentin Tarantino’s Once Upon a Time in Hollywood, a revisionist period fantasy that revisits the Tate murders, found itself at the center of not one, but two war fronts.

On one front, there was Bruce Lee’s daughter Shannon Lee, who spoke out against the portrayal of her father in Tarantino’s movie (played by Mike Moh). And on another, Bruce Lee — or at least, Tarantino’s made-up version — was the center of what The Verge called “A Wikipedia spoiler war” where an unknown troll maintained a wildly fake plot summary for the film’s entry on the site. In these fake “spoilers,” Bruce Lee rescues Tate, her friends, and Lee’s rival Cliff Booth (Brad Pitt) from the Manson Family “in a prolonged shoot-out/kung fu showdown,” which ends when Booth kills Charles Manson with a shotgun.

This… is not how Once Upon a Time in Hollywood ends, nor has the party responsible behind Wikipedia’s misinformation ever been identified. Still, as far as made-up scenarios go (which are most fan theories), it doesn’t sound all bad.