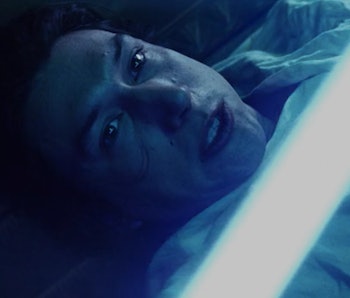 On Wednesday, the cast and creatives of The Rise of Skywalker appeared at a Los Angeles press event to discuss the movie ahead of its December 20 release. Despite a months-long trickle of leaks — or perhaps because of them — we still have tons of questions about what’s going to happen in Episode IX. How is Palpatine even alive at this point? What’s the deal with those space horses? Is Baby Yoda a Ghost Clone? There weren’t any Dark Rey-grade jawdroppers from the event — we didn’t get to see Ian McDiarmid, Hayden Christensen or Matt Smith (ha!) — but Adam Driver did offer an intriguing comment about Kylo Ren, and whether he’ll finally embrace his identity as Ben Solo and leave all that Dark side business behind.

Someone asked Driver whether there was any remnant of the former Jedi padawan Ben Solo left in Supreme Leader Kylo Ren. According to fan site Star Wars News Net, the actor was visibly unenthused by the prospect of responding to this, pretending to defer to director J.J. Abrams lest he accidentally reveal some massive spoiler. After a pause, Driver said simply: “He is both.”

A vocal segment of the Star Wars fandom has been eagerly poring through official reveals and leaks for any hints of “Bendemption,” the fan-made portmanteau for Kylo Ren’s hypothesized turn to the Light side of the Force. There’s a lot of evidence — official and otherwise — to suggest that this could actually be a central element of the plot of Rise of Skywalker. After all, we’ve all seen that shot where Kylo seems to have a hand in destroying his precious crusty Vader helmet dozens of times by now.

While on the surface, Driver’s comments are a PR-savvy non-answer, it’s also a pretty strong indication that even if Ben is redeemed, he won’t be able to fully walk away from the terrible deeds of his past. Giving Ben a white outfit and a blue lightsaber won’t wash the bloodstains from his hands. Not only did he kill all-around Best Human Being Han Solo, he’s also responsible for the deaths of many, many people due to his prominent role in the First Order.

Driver’s latest comments hint that despite what the most ardent Reylo stans might hope, there probably isn’t a happy ending in store for Ben Solo, even if Rise of Skywalker closes on an optimistic note.