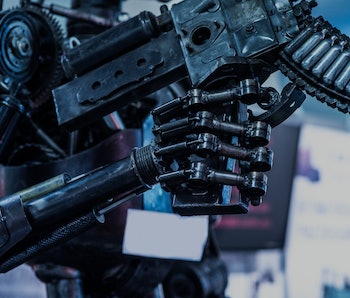 Police officers are huddled behind their cruisers as they try to figure out their next move. Someone has remotely hacked two of their armed robots and programmed the robots to open fire on a crowd. Dozens are injured or dead. This is the day they all feared might arrive.

But this kind of scenario is what activists who are fighting against the proliferation of so-called “killer robots” are warning us about, and we’re we’re not moving away from the police the investing in robots to assist them in serious situations.

Whether we’re talking about police using killer robots or the military, there are many ways in which adopting this kind of technology could have unintended and potentially horrific consequences.

Killer robots could become a monumental problem in numerous ways. On the battlefield, autonomous robots might malfunction and cause many unintended deaths. They could be used by rogue nations to target and eliminate ethnic groups using forms of facial recognition. Terrorist groups could use them to kill soldiers, civilians or otherwise generally wreak havoc to destabilize a region.

Within the borders of the United States, the use of killer robots by law enforcement or security services could lead to these robots being hacked by our own citizens, they could malfunction on the job or they could simply be used in ways that make it harder to hold the agencies using them accountable.

Back in 2017, Elon Musk and Alphabet’s Mustafa Suleyman led a group of robotics and AI experts who called on the United Nations to ban the use of this technology. They referred to such robots as “weapons of terror.”

“We do not have long to act,” the experts wrote in an open letter. “Once this Pandora’s box is opened, it will be hard to close.”

As we’ve previously reported, many weapons manufacturers recently admitted to being in the process of developing an array of autonomous and semi-autonomous weapons. The kinds of weapons they’re developing include autonomous combat drones, autonomous submarines and autonomous tanks. But hell, you’d have a killer robot if you just gave Boston Dynamics’ humanoid robot Atlas a gun.

As 2019 draws to a close, Inverse is looking to the future. These are our 20 predictions for science and technology for the 2020s. Some are terrifying, some are fascinating, and others we can barely wait for. This has been #13. Read a related story here.