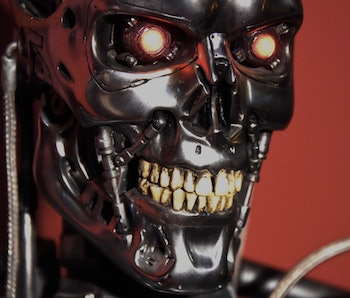 The United Nations must act to ban the use of autonomous weapons — now. That’s according to Elon Musk, Mustafa Suleyman of Google’s DeepMind, and 114 other leading figures in robotics and AI who have signed an open letter urging the UN to stop the technology from changing everything we know about conflict.

“Lethal autonomous weapons threaten to become the third revolution in warfare,” the letter says. “Once developed, they will permit armed conflict to be fought at a scale greater than ever, and at timescales faster than humans can comprehend.”

The letter outlines in clear detail just how quickly the use of autonomous weapons could get out of hand — or into the wrong hands. “These can be weapons of terror, weapons that despots and terrorists use against innocent populations, and weapons hacked to behave in undesirable ways.

“We do not have long to act. Once this Pandora’s box is opened, it will be hard to close.”

Robotics and AI communties, as well as human rights groups, have long argued that autonomous weaponry has the potential to inflict extreme crimes against humanity in conflict zones. “Killer robots would remove the human from the kill decision. That crosses fundamental moral and ethical lines we don’t believe should be crossed,” Mary Wareham, the lead coordinator of the Campaign to Stop Killer Robots, told Inverse in February.

The letter comes ahead of formal discussions by the UN on the issue of lethal autonomous weapons. After commending the UN for establishing a group of governmental experts to review the issue, the letter implores the group to find a way to prevent an arms race to acquire these kinds of weapons.

The letter was released Monday (Australian Eastern Daylight Time) at the opening of the International Joint Conference on Artificial Intelligence in Melbourne, the world’s leading conference for experts in the field of robotics and AI.

As the letter notes, the UN group was scheduled to begin their work on Monday as well, but has been rescheduled for November. Subsequently, the letter urges the group to “double their efforts” once they finally meet in the coming months.

This is not the first time experts in AI and robotics have warned that we need to ban the development of military robots. Musk, Stephen Hawking, Steve Wozniak and over 3,000 researchers signed an open letter asking for a ban on autonomous weapons “beyond meaningful human control” at the same conference back in 2015. At the time, researchers said that an AI arms race was “a bad idea.” Two years later, a new letter warns that a bad idea could be a disaster.

With reporting from Madison Margolin.