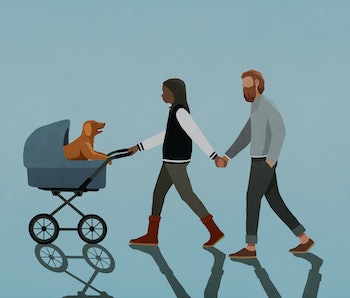 Americans are pet-obsessed. As a collective, we own millions of them and spend billions on them. And while you may not realize it, we’re drawn to house-friendly animals for reasons besides that they’re cute.

Pets make us happier and healthier, and there’s science to back that up.

In October 2019, University of Liverpool lecturer Carri Westgarth and University of Pennsylvania professor James Serpell explained to Inverse why pets can improve our lives while only asking for a few head rubs in exchange.

This is #23 on Inverse’s list of 25 striking lessons from 2019 for humans to help maximize our potential.

Our positive relationship to pets can, in part, be explained by the biophilia hypothesis, Westgarth said. This is the belief that we are genetically predisposed to be attracted to nature.

Our love of pets links back to that attraction. That’s not just because they are animals, and animals are part of nature. They also bring us into nature — think about every time you have to take the dog outside for a walk.

“There is something unique about our relationship with animals that adds to our lives, and it’s not quite the same as the relationship we have with people,” Westgarth said.

The social-support hypothesis posits that pets make us healthier because they facilitate interactions with other people. This can manifest as talking to strangers at the dog park, or letting a kid pet your dog.

Case in point: A 2005 Social Science & Medicine study found that, in a group of 339 suburban-living Australians, pet ownership was positively correlated with forms of social contact and interaction. People with pets thought of their neighbors as friendlier, and in turn, became more involved in their neighborhoods than people without pets.

How pets benefit you physically

For most people, being around pets affects them physically — and in a number of ways.

Pet owners also tend to get more exercise — and being physically active is good for the body and brain. Physical activity results in real changes. Owning a dog is positively associated with better cardiovascular health, according to a study published in August. It’s even possible that dogs have been making us physically healthier for thousands of years. As for cats, that’s TBD.

As 2019 draws to a close, Inverse is revisiting 25 striking lessons for humans to help maximize our potential. This is #23. Some are awe-inspiring, some offer practical tips, and some give a glimpse of the future. Read the original article here.